AN INVISIBLE MOMENT AND A HAPPY ENDING

So there I was with my new carte grise in my hand on Monday morning and all I needed to be able to ride my motorcycle in the lovely warm and sunny weather was a number plate with my new French registration number on it and some insurance. 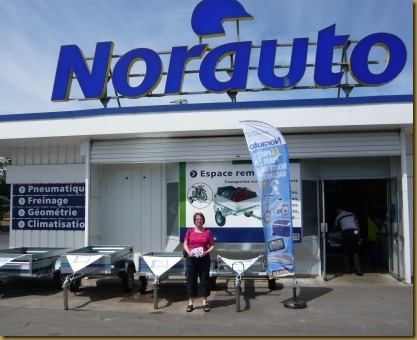 A happy person with her new plaque d’immatriculation

Nick remembered a car spares shop (similar in style to the UK Halfords) next to the big Auchan supermarket in Chatellerault.  As it was Monday of our first week’s holiday, we needed to do some shopping so off we went.  The process of getting my number plate (plaque d’immatriculation) was the easiest and quickest in everything we had done so far – ten minutes after entering the shop we left with the plaque. 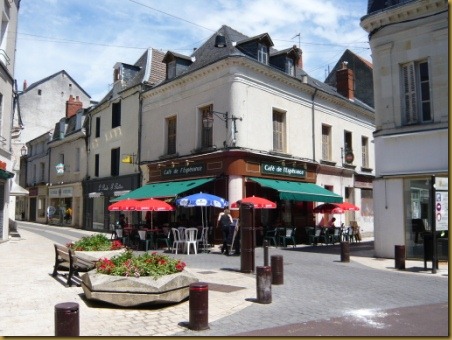 Chatellerault has lots of nice cafés and restaurants.

So we decided to have a spot of lunch in the town centre and also fit in a visit to the motor museum which is down by the river in the early afternoon, with the aim of calling in at the insurance office in Descartes on the way home to tie up the last loose end so that we could be on the road on Tuesday.

It was a beautiful hot and sunny day.  We had a lovely walk by the river and the motor museum was superb – much more about that later.

We arrived at the insurance office in Descartes about 4pm.  We had decided to use the same company as we already use for our French house insurance.  When we bought that, the process was incredibly long and tedious – you can read about it here.  So we thought already being clients would save time. 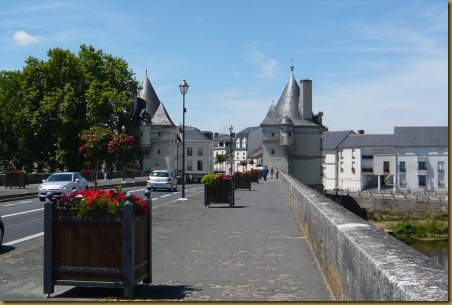 Down by the river at Chatellerault.

However, another unforeseen hurdle cropped up.  The original insurance agent we dealt with, M.Touteafait, had retired and in his place was a young man call Eric.  Eric insisted on seeing some “letter of introduction” from my existing motorcycle insurers, stating how long it was since I had had an accident or conviction, before he would consider me for a policy.

Harrumph……!!  Not wanting to waste the beautiful weather, we dashed home and got on to our insurance company toute suite.  This proved to be difficult as they only have a UK 0800 telephone number and we couldn’t access that from our mobiles.  By 5pm we were having an argument with a young insurance call centre agent called Darren, who was hundreds of miles away and not happy about giving me any such letter.  Eventually we managed to persuade him we were not intending to use it for devious or illegal purposes and he agreed to email it to us. 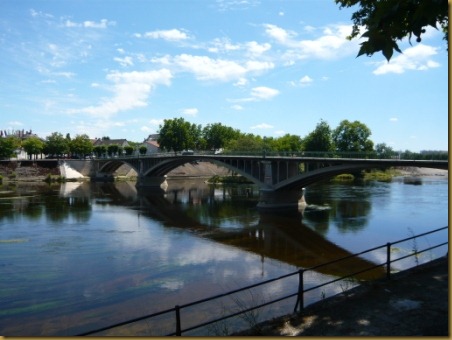 One of the bridges over the Vienne at Chatellerault.

On Tuesday it was warm and sunny.  We decided to leave it until lunchtime to give the young Darren time to send the email.  As we have no internet access in our little house, we have to use the public computer in the Tourist Office.  At 3pm we were there, hoping to simply get this letter printed off so we could hop it back to Descartes, show it to Eric and get this insurance thing sorted.

Nothing is ever easy.  We failed to access our email account at all – maybe something to do with using a public computer.  After numerous fruitless attempts we gave up and dashed up to Alex and Nicole’s where we could “borrow” their broadband with my little laptop.  We logged on successfully but by 5pm, nothing had arrived.

Wednesday dawned bright and sunny and as soon as it was sensible we were on the phone again to our insurance company.  Nothing had arrived on Tuesday because it was Darren’s day off.

We spoke to a young lady called Julie who promised to sort the job out.  We gave her a different email address – one that we knew we could access at the Tourist Office because we had done so before.  We were in and out of the Tourist Office all day.  By 4pm nothing had arrived.  As a long shot we went back to Alex and Nicole’s to beg use of their broadband yet again and sure enough, Julie had sent it at lunchtime, but to the wrong email address.

Still, at least we now had the letter and Nicole kindly printed off two copies for us.  Unfortunately it was now 5pm and too late to go to Descartes to buy the damned insurance and tomorrow was 14th July, a bank holiday. 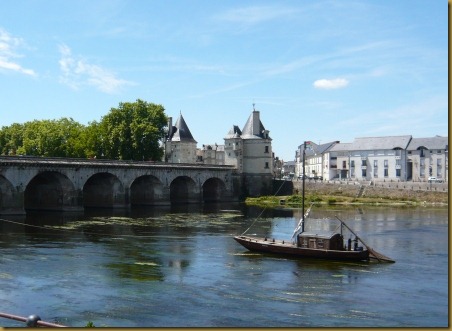 The other bridge over the Vienne at Chatellerault.

The 14th July was a lovely warm and sunny day and we had a great time – more about that later.

On Friday we were expecting visitors for lunch and had lots of preparation to do.  We had ordered some moules from the supermarket in Descartes and had been told to pick them up at 9am.  So I took my letter from the insurance company with me so I could call at the office and save another trip.  It was another lovely warm and sunny day.

Now I have a theory that when you turn 50, you start to gradually become invisible.  I have had many moments of personal invisibility since my 50th birthday and today was going to be one of them.

I entered the insurance office to find Eric not there but a female colleague in charge.  She looked at me as if I was an alien from planet Zog when I explained I had spoken to Eric on Monday, and here was the letter, etc., etc.  She asked me to sit down and just as she was obviously trying to take it all in an older man entered the office and stood behind me.  He interrupted our conversation, which I thought was probably ok if he just had a quick query or wanted to hand something in, but when she started to deal with him at length, including using the computer, I realised I had become invisible again.

I was sitting only feet from this woman, staring her in the face with beady eyes and she was ignoring me.  It had been a long, hot and sunny week which would have been perfect for riding my motorcycle, we had guests coming for lunch, my moules were calling to me from the car and I was rapidly running out of patience.  I then had what can only be described as a bit of a strop.

I reared up in my chair and with my face only inches from hers, said “excusez-moi”, very loudly, as the insurance lady was mid-sentence.  She looked horrified, as if I had indeed suddenly landed on my feet in front of her without coming through the door.  I ascertained that the office would be open tomorrow, which was Saturday and said “je revien demain”, scraped my chair back, stormed out and slammed the door behind me in a very satisfying fashion.

I drove home to Le Grand-Pressigny the pretty way, just to remind myself what a beautiful part of France we live in, how lovely the weather is, how perfect the roads are for motorcycling….oh what the heck…tant pis.  I wouldn’t be riding my bike today anyway as Ken and Walt were coming for lunch and we would be having a lovely time with them

First thing on Saturday morning we called in to see Eric.  The process of buying an insurance policy took about an hour.  It required much tapping of the computer as he said “ tac, tac, tac” and entered the same information over and over again.  He then scanned all my documents and the all-important letter.  At 10am I stepped out of the office with my insurance certifiicate – my carte verte - in my hand – just as it started to rain.

It continued to rain on and off for the next week.

How I registered my UK motorcycle in France

This is how we would do it again, now that we know what we should have done in the first place !!

The process is probably similar for cars.  I am also told it varies from one part of France to another ~ I can’t vouch for this.  This is not intended as a definitive guide but it may be helpful to other people who haven’t a clue where to start.

A cheque and stamped, addressed envelope for your French address

A letter from your insurance company stating your claims history

Bill of sale for the motorcycle

Get your Certificate of Conformity from your dealer.  This document states whether or not your motorcycle conforms to the European standards and it may be free or there may be a charge.  Mine cost £150 and took two weeks to arrive.

Take your Certificate of Conformity, UK registration document and your EDF bill to the Hôtel de Finance for your area and get a Quitus Fiscal.  This is a customs document.  Your motorcycle should be more than 6 months old and have 6,000 kilometres on the clock to avoid paying import duty, I believe.

You can download an application form for the new carte grise, a demande de certificat d’immatriculation d’un vehicule from the internet here.

Take your quitus fiscal, application form and all the other documents, to the office issuing carte grises in your area.  Mine was at the Préfecture in Tours.  Get there as early as you can and join the queue.  There was a ticket machine inside to issue tickets for places in the queue, once the office was open.  Our office was open 8.30- 12.30 only and friends who went through the same process after us said there was a long queue outside by 8.00am.

Take your carte grise to the number plate shop to buy your new plaque d’immatriculation.  There is one a few doors down from the Préfecture in Tours but I got mine from a car spares shop and it cost 16 euros.

Arrange insurance ~ for this you will need your new carte grise, driving licence and the letter from your existing UK insurance company giving your claims history.  The French system of giving discounts on premiums is similar to the no claims bonus system in the UK.

I suggest you compile all the documents in a file and take the whole lot with you at each stage.  I ended up applying by post so I sent photocopies of my passport, driving licence, etc.  I therefore suggest you make photocopies of absolutely everything, just in case.

Retain the part of the UK registration document that you have to fill in and send off to say you have exported the vehicle, before you hand it over as it will be kept with your application form.

I was never asked for my bill of sale so I don’t know at which stage you might have to produce it.  There is also the possibility that you will be asked to make modifications to the vehicle and present it for inspection at some point but I don’t know how this works as I didn’t have to do it.