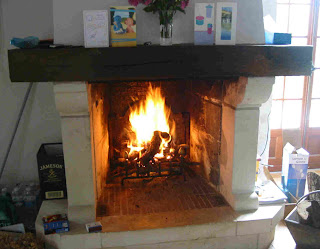 On Monday, 12th November 2007 we moved into our little cottage properly. In other words, we spent our first night there. 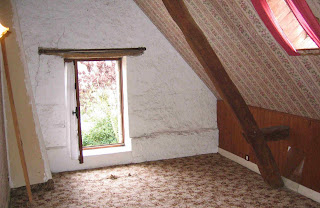 We had intended to use the larger of the two bedrooms as our room and the smaller one as the guest room. However, unfortunately, one of the things we didn't appreciated when we saw the house in August was that neither the window or the skylight closed properly, meaning a freezing draught was coming through now. Also the horrid shag-pile carpet, foam-backed and laid onto concrete, was in awful condition. It was frayed badly in a patch just in front of the window. As the window sill was at ankle-height and there was no grille at the window to prevent anyone falling out, I could see a potential trip-hazard. So we decided to use the smaller room. It was darker but much more cosy, if it were possible to apply such a word to a room where the paper is falling off the panelling and there is no heating. 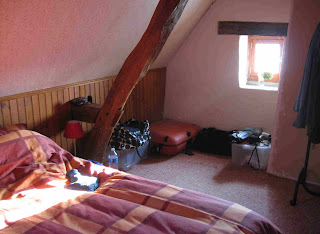 Today would be the day of the big shop. All we had so far was a bed, our two small camping chairs, two garden director chairs that Barrie had lent us to use as easy chairs and the broken clothes rail left behind by Mme. Barrie had also given us two small electric heaters that he didn't need any more.

We went to Descartes and bought a round metal garden table which would do nicely indoors for now. We ordered all the white goods for the kitchen which would be delivered on Friday. We bought a shower rail and curtain and bedside lamps. (We were told to just take them off the display stand so we took the ones with the bulbs in.) We bought saucepans and a coffee machine; we had already brought a kettle with us from home. We stocked up on draught excluders and bought a fire dog for the fireplace in prepartation for our first fire. We had no idea when that would be as we had no logs yet.

So we were all set up to be comfortable for our first night. The heaters had been on all day so the temperature inside the house was lifting slightly. Those thick old walls were taking a lot of warming up. Alas, none of the doors or windows fitted and you could see daylight through the roof on one side, so the whole house was extremely draughty. 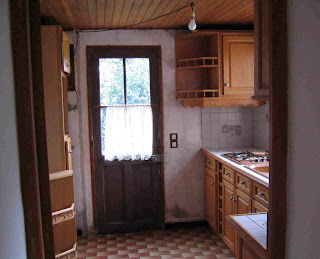 We had checked that there was some gas in the gas bottle and that the hob seemed to work.

That evening we had our first meal in our little house. It was nothing adventurous, just standard camp-cooking as the oven had disappeared with the rest of the contents of the house. Something with pasta and coffee afterwards. We did celebrate though, with a bottle of bubbly.

After dinner we settled down to read our books before bed. We were frozen. We hadn't got around to fitting all the draught excluders and even with all four heaters on in the room downstairs and with several layers of clothes on, it was very chilly compared to how we live at home. No wandering comfortably from one centrally-heated room to another, leaving doors open. We had towels stuffed along the bottoms of all the doors and were paranoid about going out of the room for fear of losing some precious heat. And it was only early November !!

We did not sleep well. The coffee didn't help but we drifted in and out of sleep, listening to the house's little noises and the thermostat on the electric heater in the bedroom clicking in and out.

Next morning, Nick had just gone downstairs to put the kettle on when there was a bit of a commotion outside. Opening the front door, he was accosted by the post lady, wearing her helmet as she had ridden up on her moped. A fearsome sight - she was a large woman to be on such a small moped. We were in trouble already for not having a proper, regulation post box. One of those big yellow metal ones. POST ALREADY ?? It was a "welcome to your new home" card from some friends in the UK. We put a post box on our shopping list.

Kettle boiling, Nick had just gone out to fetch some bread when there was another knock on the door. Michel, the wood man, asking if it was us that needed the wood. I had no idea how he knew but I was very pleased - we would be able to have a fire soon. He stepped inside and measured the fireplace and said he would deliver a "stair" of logs in the afternoon. I had no idea what that meant but it sounded good to me. It transpired that he is the nephew of our neighbour, Mme André - that's how he knew we needed some logs.

The next visitor was Pascal the plumber, come to sweep the chimney. Things were definitely looking up. When we had seen him on Sunday at the vide grenier he said he would come in the week, but we had no idea when that would be. He chose the perfect day. In the afternoon Michel turned up with his van and dumped a pile of logs in the courtyard. HOORAY !!

Minutes later, we had the fire going, we were so desperate for the heat. All looked well at first. Soon we realised we had a problem. No matter what we did, we could not get the fire to stop filling the whole room with smoke. Nick tinkered around with it all afternoon and all evening but it was a disaster. We tried a big pile of logs, a small pile of logs, every combination of doors closed and open and even blocking off part of the fireplace, but it was awful. By the time we went to bed you could hardly see across the room through the smokey haze and the whole house reeked of woodsmoke. A certain amount of woodsmoke is very pleasant to the nose but this was horrible.

We had a second night of poor sleep, choking on the smoke in the bedroom and worrying about what we could do about the fire. By morning we had made our minds up and resolved to ask Pascal to fit us a log-burning stove, a poêle. 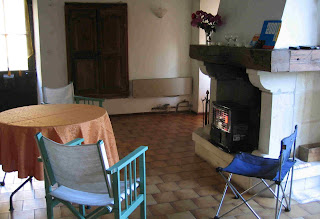 In the meantime, we had to abandon the open fire we had looked forward to so much. The next day we went on one of our many visits to Leroy Merlin at Tours and bought a parafin heater. It worked extremely well, chucked out a lot of heat and looked rather cute sitting in the fireplace. We could have had it for days, warming the house nicely, if only we had known. C'est la vie.