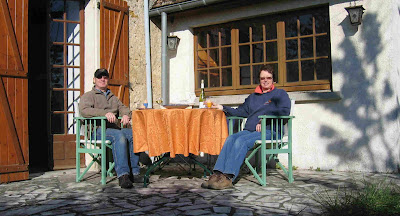 In 2007 we spent Wednesday 14th November familiarising ourselves with ALL the DIY shops in the locality. We visited Leroy Merlin (a sort of cross between B&Q and John Lewis), Bricomarché, Monsieur Bricolage and the major supermarkets which also have DIY sections. Our first week in our little cottage was half over and we had a lot to do yet.
We bought light fittings, electrical bits and pieces, a ladder, a grille for the bedroom window, a regulation yellow post box and more draught excluders. We bought a standard lamp for the one room downstairs and of course the parafin heater. One of the shops we visited was the Godin showroom at Tours where the assistant told us there was a three-month waiting list for them. Depressing news. 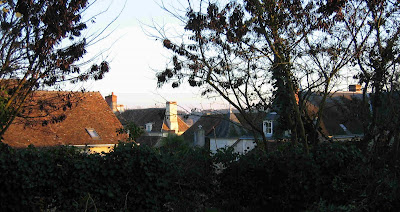 Later that afternoon we spotted Pascal the Plumber's van in the village. Just as he was getting in to drive off, we chased after him and did our best to explain our problem with the fire. That the chimney was too big and that we thought the only solution was to have a wood-burning stove (poêle). He said he would come to measure up the next day at 11 am.
On Thursday he turned up bang on time and presented us with his well-thumbed catalogue which fell open at the page illustrating a fairly business-like looking stove that looked a lot like Barrie's. Sure enough, having measured up, and scratched his head over the size of the room and the fireplace, he recommended exactly this one. We decided to go with his suggestion. Barrie's seemed to work extremely well so one like that would no doubt do us fine.
We pointed out that we were only around for another few days but would be back just before Christmas. We thought he said it could be installed by then - but we were not too sure. We already had a large and very neat pile of logs in the cave so a wood-burner would be just perfect.
On Thursday afternoon we started our search for furniture; dining table and chairs, sofas and wardrobes. We rapidly came to the conclusion that this was not going to be easy. Having looked in every furniture shop we came across, we drew a blank and found nothing we liked at a price we could afford - this was a holiday home after all.  At that time the nearest Ikea was at Paris - not that we are huge fans of Ikea but some of their stuff would have been ideal for us.
On Thursday evening we had the luxury of our newly acquired parafin heater to comfort us. It was wonderful. We perched it in the fireplace and after dinner, relaxed in Barrie's director chairs and gazed at its blue and yellow flames in absolute wonder. For the first time in our little house we were beginning to feel comfortably warm. 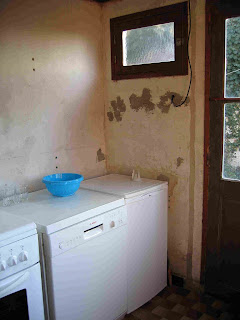 On Friday morning the white goods arrived as promised. The delivery van was parked in the street, entirely blocking the road for over an hour. Much to our amazement, nobody seemed to mind. We now had a fridge, washing machine, dishwasher and cooker. The cooker had an electric oven and 3 gas rings. The fourth ring was electric so that if your gas bottle ran out you would still be able to eat. Clever.
In the afternoon, Nick chopped down all the hugely overgrown hydrangeas at the front. They put up quite a fight. We also planted a few pansies in an attempt to cheer the front up a bit. Mme André was thrilled. She had lived next door to two properties that had looked unloved and unlived-in for a long time and she seemed to be delighted that at last someone was taking an interest in one of them. Her helpful suggestions tested our French to the limit but I could see that we were getting on well and could become good friends. 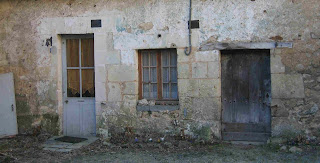 We also had a visit from the Pompiers. Jean-Paul, sporting a magnificent handle-bar moustache, and one of his colleagues, had obviously heard we were not there for much longer so took the opportunity to combine a nosey round with the sale of their calendar for next year. They were asking for donations rather than a fixed price. Luckily, Nicole and Alex turned up for a nosey at the same time and came to my rescue as I was dithering. Ten euros seemed to be the going rate this year. 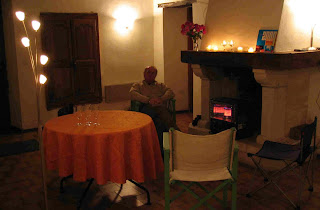 On Saturday evening, we invited Barrie and Lucie round for apéros. We thought our little home looked lovely and cosy. With candles glowing, we all sat round our parafin heater, admiring the little pink and blue flames and luxuriating in the warmth, enjoying a glass of Loire Valley sparkling wine.
So the end of our first week came. We had spent the whole time wearing umpteen layers of clothes to keep warm. We had become experts at minor electrical installations and regulars at the DIY shops. We had found that French tradespeople are very friendly, helpful and just as reliable as in the UK, if not more so. Not only that, some of them didn't want payment either - they were happy to send us the bill later. All in all we had had a wonderful week. 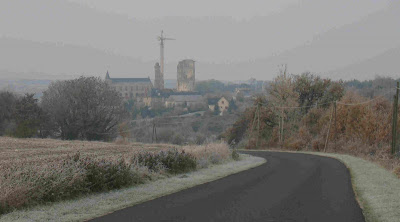 On Sunday morning before we set off for home, we took some pictures of the deep frost in the fields with the château in the distance. It looked beautiful but my goodness, it was cold. As we made our way through France we were looking forward to our next visit which would be in only five weeks' time - for Christmas.
On the way home, it snowed. And I was missing the place already.