JUST ANOTHER DAY IN PARADISE 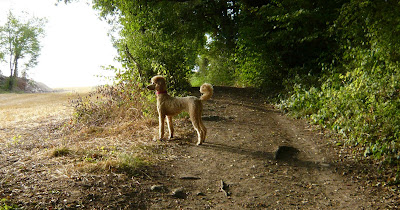 Lulu enjoying a walk in the cool of the morning.
----
Before we set off for France we had checked the weather forcast periodically and it looked like we were in for a good couple of weeks. When we arrived I was surprised to see how parched everything was. Our little lawn was quite brown, in spite of the TLC lavished on it by Nicole (in her Chez ANIA Jardinage capacity). In actual fact for the whole two weeks it was really hot and we had mostly brilliant sunshine. By Wednesday of week one we were getting temperatures of 38° C in the mid-afternoon.
----- 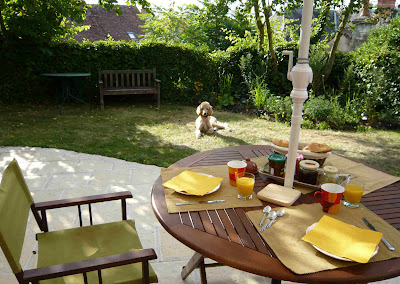 Breakfast on the terrace every morning was one of our favourite times.
We had to plan our trips out very carefully. Lulu could not be left in the car for even two minutes at these temperatures. Sometimes we would take her with us if there were likely to be places we could let her have a run around. Mostly we would leave her at home, with access to the garden, and she seemed quite happy with this. 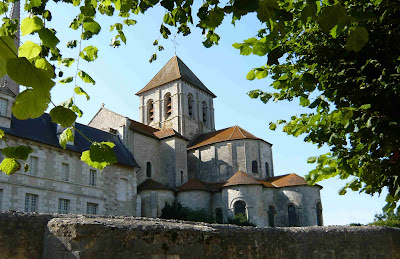 On one of our days out we stopped at St-Savin-sur-Gartempe. We had passed through the town a few times before but on this day, we stopped, had a drink in the square in the shade and a walk around. 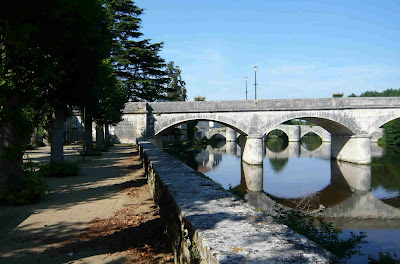 The Gartempe is the river at St-Savin

It is a lovely place. Down by the river it had a very tranquil feel, apart from the enormous lorries that occasionally thundered over the nearest bridge in the picture. So many pretty towns in France have to endure the heavy lorries that rather spoil things. We didn't fancy going into the museum but were content with a stroll along the river under the shady trees. The sun was quite fierce and it was awkward getting good photos in the dazzle of the afternoon. 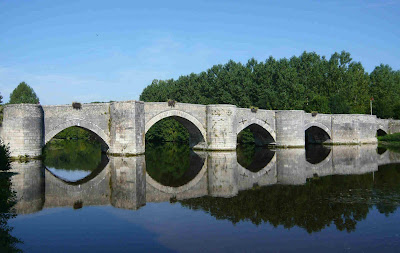 The old mediaeval bridge over the Gartempe, just by the Abbey.

The whole place was generally very quiet. I found it difficult to grasp the fact that most of France had gone back to work and almost back to school by the time we had arrived for our major summer holiday.

This is our favourite time of year for a holiday. The crowds have usually gone but most places are still in full swing and the weather is often superb. The fabulous blue skies in our photos reminds me of how lucky we were with the weather this year.

We thought we seemed to see fewer British cars than on previous years - the last fortnight at the end of the school holidays is usually such a popular time for the English to take their holiday in France. Maybe the poor exchange rate and the "credit crunch" had put a lot of them off. 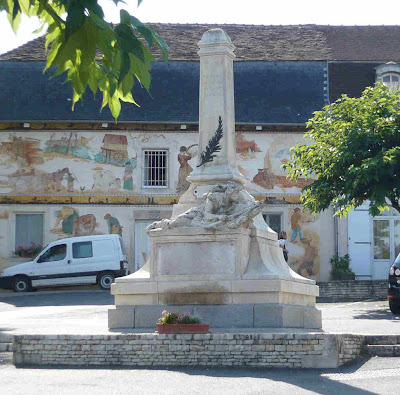 The war memorial at St-Savin.

If I remember correctly it is for the soldiers of the Crimean war - but I could be wrong. 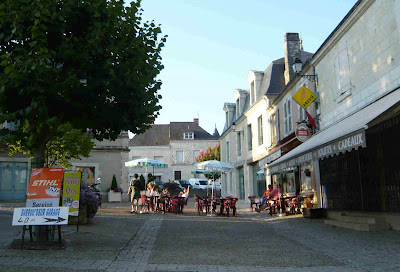 We ended most of our trips out with a drink in the village square in Le Grand-Pressigny, usually at the PreHisto but often at the Jean-Bart, depending which had the shade or the empty tables.

"Just another day in Paradise" is what we would say each morning as we awoke to blue skies and sunshine, day after day.