I have written before about our mode of travel to our little house in France. Generally it takes about 12 hours door-to-door by car, 9 hours of which are actually spent on the road, the rest of the time being taken up by stops to stretch our legs, have a bite to eat, or waiting to board the train . 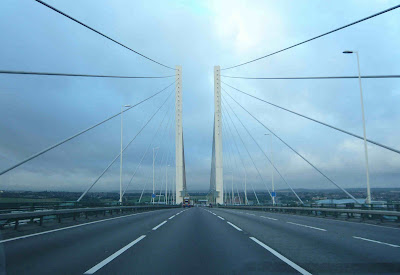 Crossing the Queen Elizabeth II bridge at Dartford at 6am.
Lately we have favoured getting up very early and driving to Eurotunnel at Folkestone without a stop, or with just one stop if needed. In August this worked very well. We got up at 3 am and were on the road within the hour, having packed the car the previous evening. I made a flask of coffee with the remains of our milk, stashed a large bag of sandwiches in the cool bag, disposed of the last few items in the fridge and away we went. 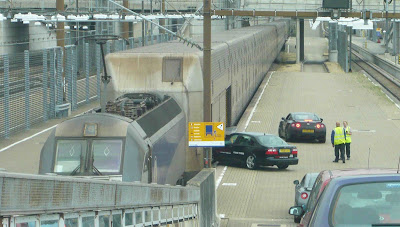 Boarding the train at 7.30 am.
The weather was cool and drizzly but as it was Saturday morning we had a clear run and arrived at Folkestone early. Luckily there were spaces on the next train and we made the crossing 40 minutes earlier than the time we had booked.

I am always impressed with Eurotunnel. So far, we have made dozens of crossings and rarely have we been delayed. Even when they are phenomenally busy, the staff are polite, helpful and friendly. I can really recommend them. 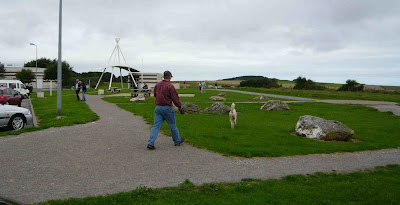 Stretching our legs at 9.15 am in Northern France.
We were in France by 9.00 am and it was still cool and dull but we had a short break at one of the first services beyond Calais. We have used this stop several times as there is a large field next to the filling station where we can let Lulu off the lead and she can have a good run around. We enjoyed some sandwiches and hot coffee from the flask and after half an hour we were back on the road. 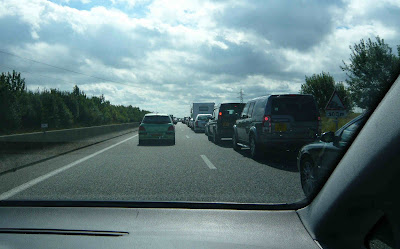 Mayhem on the motorway
By 10.00 am we knew we were in trouble. There was a massive traffic jam on the motorway at Le Touquet. Traffic going north was at a standstill for miles. We hit the back of the queue going south soon afterwards as we got near to our exit at Abbeville. This was most unusual. Normally there are no hold-ups and the roads are quiet. We did the same journey on the same Saturday last year so what was the problem?
Then we remembered. Last year we had travelled through the night, arriving at Le Grand-Pressigny at 8.30 am, thereby missing any traffic completely. This year we were in the thick of it, travelling on one of the busiest weekends of the year for holday traffic. A high proportion of the cars had UK plates.
So we decided to leave the motorway and do what we used to do when we travelled everywhere by motorcycle. We went the pretty way. 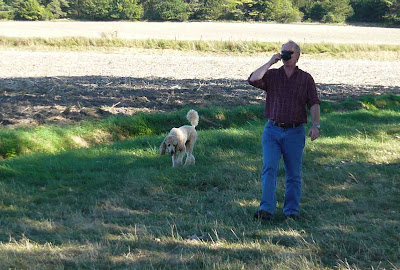 Taking a break near Vendôme at 3.00 pm. It was 34°C.
We bipassed Rouen and went through Les Andelys, Evreux, Dreux, Chartres and rejoined the motorway just north of Tours. It was a long day. We arrived chez nous at 5.30 pm, two hours later than we had intended. But we had saved more than 30 euros in toll charges and had seen bits of France that we loved and had explored many times before. Interestingly, the journey was also four miles shorter. In years gone by we would have made the journey over two days on the bikes, stopping somewhere to camp for the night or treating ourselves to the luxury of a hotel room, a bath and a good dinner.
We did our usual shop for essentials at SuperU in Descartes, called at the butcher in Le Grand-Pessigny for some meat and the boulangerie for some bread. The temperature was 34°C.
We were all so happy to be back. The sun was shining and it was so lovely and warm.
Just before our holiday we had been very busy at work and at home, getting the house ready for the decorator to move in while we were away. It was a huge effort and we were more than ready for a relaxing holiday. 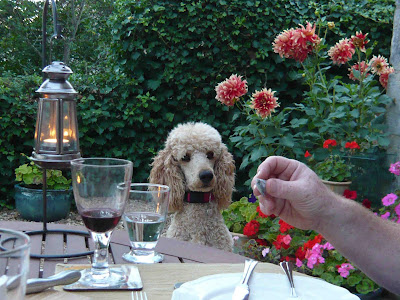 Lulu deserved a bit of her favourite St Maure cheese after such a long day..

The house was in great shape. Alex and Nicole had made sure the garden was at its best. Nick decided to barbecue the chops and chipolatas from the butcher and we really enjoyed our first holiday meal. We sat on our little terrace until it was dark. The swifts and swallows entertained us and when they went to bed the bats came out for a while and did the same.

We were not too late to bed. On the one hand we could have sat for hours into the night, enjoying the warmth, the peace and quiet and the prospect of two whole weeks of relaxation. On the other hand, the journey had taken its toll. It was two hours longer than usual because of our detour and we were exhausted. Except for Lulu, who had slept most of the way. Soon after the church bells had chimed ten o'clock, we took Lulu up the hill for her last walk then went to bed. 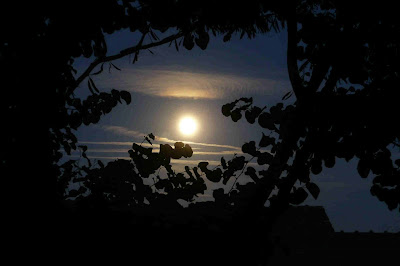 Moonlight over our garden. The calm before the storm.

At 4.00 am we were woken up by the most amazing thunder storm. For a whole hour the noise was incredible. Lulu had been sleeping downstairs and usually thunder doesn't bother her but after one particularly loud bang she shot upstairs and whimpered outside our room, asking to be let in. We read in the local paper a couple of days later that some buildings in Le Petit-Pressigny had been damaged during the storm.

The next day, the weather had changed. It was much cooler, a mere 20°C. It started raining as we set off for the market in Descartes. But we really didn't care, we were on holiday.