THE SPY, THE OWL AND THE CHIMNEY 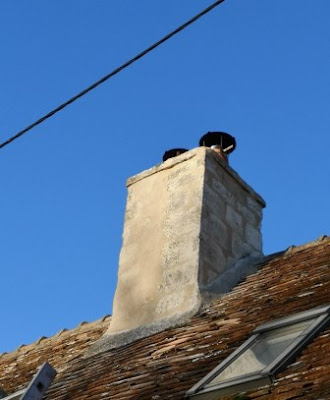 With fine weather chez nous the builder has been able to fix our chimney.
Hoorah! 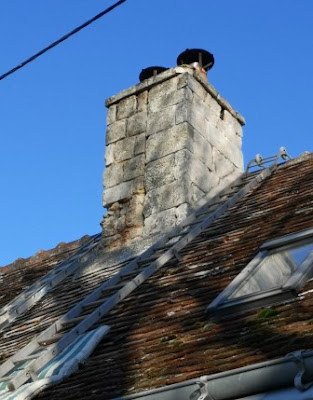 It was in dire need of some pointing and the gap under the top bit is where the hornets got in to make their nest last year. 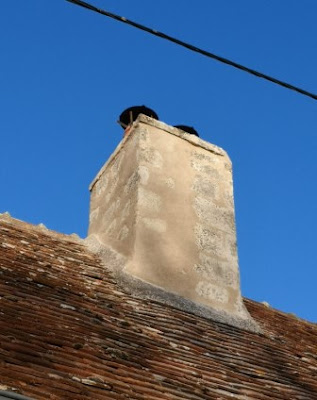 We are thrilled with what looks like a very fine job indeed.
Of course, we have yet to see it in person.  The work has been done in our absence, often a good way to get disruptive jobs done, and photos have been sent to update us with progress.
Friends pop by every so often to check on the place, sending photos to reassure us that it's still standing.  We also have a new gadget - a spy camera.  That's very exciting.  We spend hours watching the comings and goings of various creatures and birds, cars passing by on the lane and leaves blowing around.  It alerted us to the fact that chimney work was about to start by the arrival of a van and delivery of a cement mixer. 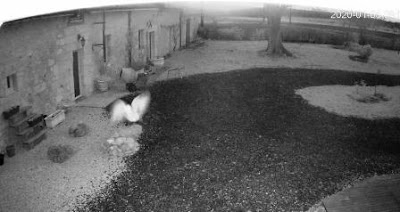 We are thrilled to see that the barn owl has moved back in.
He/she moved out last year when Daisy arrived for the summer, leaving behind much evidence of his/her inhabitation in the form of lots of owl poo and owl pellets.  In case you're wondering what the difference is, think fore and aft - well actually the other way round.
We have several minutes of video of the owl swooping around, here and there, or just sitting on the doorstep, waiting.  Who knows what for.  For several hours at a time it sits on the guttering right by the spy cam, the regular twizzling round of its head and flapping of wings triggering the camera to keep taking pictures.