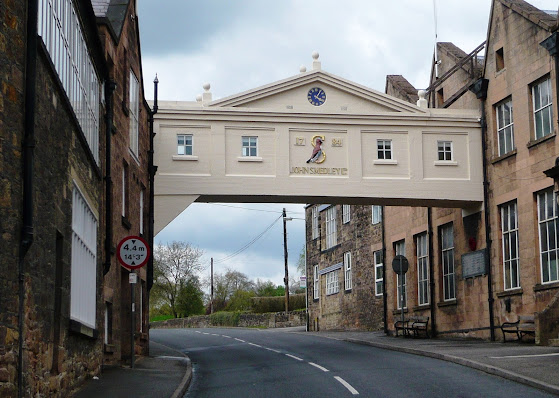 I mentioned in a comment on Tom Stephenson's blog here, that my mum's great claim to fame is that she once mended King Farouk's underpants.  Tom thought there must be a good story behind that so here it is. 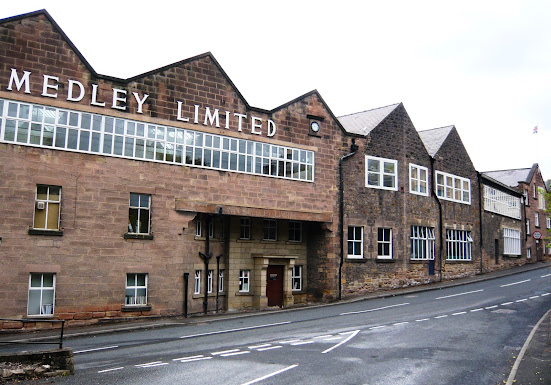 For most of my childhood our family lived just along the road from this factory.

It was only a few years ago that I learned that this John Smedley factory is the oldest working knitwear factory in the world*.  It was always part of village life, the machines clattering away day and night.

My mum and her family were the very first occupants of one of the small cluster of semi detached houses, built between the wars, that housed many of the workers in the factory.  That in itself is an interesting aspect of social history.  Many thousands of small family homes, the typical red brick "semis" that you see everywhere, were built between 1918 and 1939 to replace poor quality terraced houses and give ordinary working folk somewhere decent to live.  Most of them were "council houses".  And we're not talking grim and grimy cities like Bradford or Manchester here.  This factory is in a beautiful part of Derbyshire, the Amber Valley.  Slums were not just a city thing, they were everywhere including rural England.  Just imagine the thrill of being one of the first families to have a bathroom instead of a tin bath hanging on the outside wall and an actual, flushing toilet instead of the wooden seated "thunderbox" housed in a brick privy at the top of the garden.  That would be my mum, her parents and siblings when she was about four years old.

Inevitably, Mum and her two sisters, Rene and Vera, worked at some time or other at the John Smedley factory.  It made fine knitwear and underwear for the well-to-do.  Buses were laid on to bring workers to the factory from nearby towns and villages.

Mum worked there, on and off, part time or full time, from leaving school at the age of fourteen until she retired at sixty five.  She was one of the longest serving factory workers, and there were many who had been there all their working lives.  She began as a cleaner, sweeping up the fluff under the machines and gradually worked her way through every department.  She worked for a long time in the mending department.

Mending a fine garment so that it looks as good as new is a serious skill.  It would be unheard of nowadays but it seems that in decades gone by the well heeled, having spent a small fortune on their underclothes, would have them repaired rather than throw them away and buy new.  King Farouk of Egypt was only one of many Royal and illustrious households that were clothed in vests and knickers from John Smedley.  These garments were sold in shops like Harrods and came with a hefty price tag.  When the underpants developed a few holes, they sent them back for mending.

I remember the day very well.  My cousin and I had come home from school and were watching something like "Crackerjack" on the telly.  As mum brought our tea to the table she just mentioned it.  "I mended King Farouk's underpants today."  It was probably about 1960 and I had a vague idea that King Farouk was someone quite important.

*The factory is still making knitwear and you can read more about it here.