MAKING A RUN FOR IT 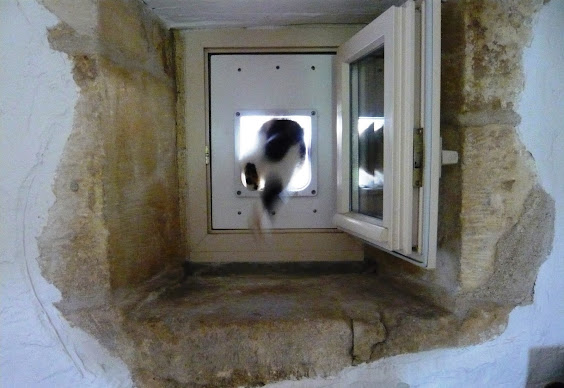 When Daisy became an indoor cat with outdoor options (after she had been kidnapped by our neighbour, which you can read about here) we got her a cat flap.  (Actually it was kindly donated by our friends Tim and Pauline as they had it as a spare.)  We fitted it into a small window in the utility room as that was the easiest and quickest option. Otherwise we would have had to fit it somehow into a glass door panel, which seemed rather too tricky.  To exit the house she jumps up onto the work top  then the window sill. 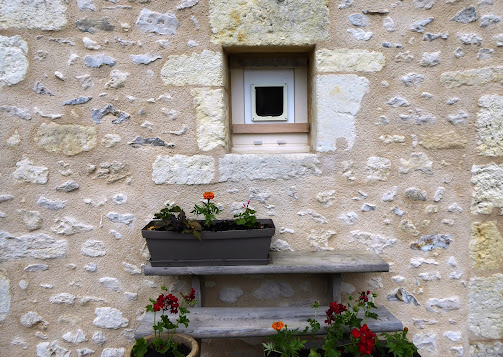 On the outside we put a kind of ladder for her to access the window.  The ladder is actually part of a staircase kit on which we display pots of geraniums.  (Curiously, very few people have ever commented on us having a cat flap in a window.)

There has been much excitement among the members of a facebook group that I follow, one that is dedicated to people who, like us, have a second home in France.  Yes, some people have made a run for it and made it across!!  Even with France in the "orange zone".

It seems that the EHIC (now GHIC) card is an acceptable form of travel insurance for the VLST (long stay visa) and an EU pet passport is being accepted instead of the AHC (animal health certificate) for pets who have a French passport like Daisy.  Apparently, as long as all the paperwork is in order, the i's dotted and t's crossed, it's a smooth process - even for those towing a trailer.  We will still have to get our covid tests and an AHC for Hugo but as long as all the ducks are in a row things are looking hopeful.  (Never as straightforward as pre-Brexit - and a lot more expensive - but doable.)

The situation seems to be changing rapidly.  On the one hand Spain is allowing visitors from the UK from next week without a covid test.  Many seem to think that France will soon follow suit. That would save us a lot of money and faffing about - one of the hiccups I have read of is some travellers' PCR test results not arriving in time for their crossing - wouldn't that be a nightmare?  On the other hand, Germany has now banned visitors from the UK entering the country due to the India variant that is running riot in certain towns.  (Another blunder by the clowns who pass as our government, allowing flights from India to continue to arrive long after the variant was known to be a problem.)  Let's hope that France does not follow that lead!

In the meantime, we have just spent a wet week in Norfolk, more about that later, but until then....

more of the same Daisy