On Boxing Day 2007 we were surprised to find everything pretty much back to normal. In France, that is. In England we would have been into round two of the Christmas eating marathon, with visits to relatives and an attempt to wade through the mountain of food purchased for the two-day holiday.

In Le Grand-Pressigny all the shops seemed to be open as usual, as if nothing had happened. It just seemed to be a normal Wednesday. This was lucky for us. We had plenty to do and were keen to make a start. So we set off on one of many pilgrimages to Leroy Merlin at Tours. For those who don't know, Leroy Merlin is a cross between a DIY shop, builder's merchant and interior design shop all rolled into one. Like a mixture of B&Q, Wickes and John Lewis all under one roof. They sell everything for the home from cushions to drainpipes. 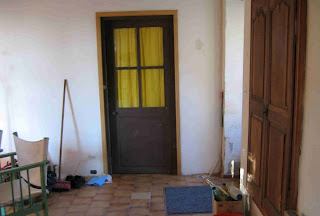 Lots of people had told us that French paint was rubbish. But I was getting really fed up with the colour of the doors and desperately wanted to paint some. They all seemed to have been painted in a thin, lifeless, matt brown or grey paint. They were horrible. On some the paint was wearing off to reveal bare and grubby wood underneath. There was nothing attractive or charming about the effect.

In fact I got the impression the internal doors were probably secondhand when they were fitted, judging by their battle scars. They were all very dirty and scratched and looked as though they had only ever been painted once, long before they arrived in our house. The door you see here is to the bathroom - with clear glass panes in it ! This was fairly typical of the "make do and mend" approach to decor that we had seen so often when house-hunting in France. Why lash out on a proper door for the bathroom when a cheap secondhand one would do and modesty could be preserved by a piece of cheap cotton fabric hung inside the door ?

In Leroy Merlin we were pleasantly surprised by the variety of paint for sale. In fact the whole store was pretty amazing. We spent a small fortune on bits and pieces and I bought a tin of orange paint. I was desperate to cheer up at least one door. Painting it orange made me feel like a teenager again ! 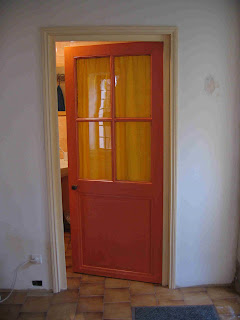 It had been many years since I had used runny gloss paint and I have to admit, the further down the door you look, the worse the finish. This could be because I started at the top in daylight and finished at the bottom after dinner in the evening when a couple of glasses of wine had been consumed !! Still, it was my door and I could paint it however I liked. 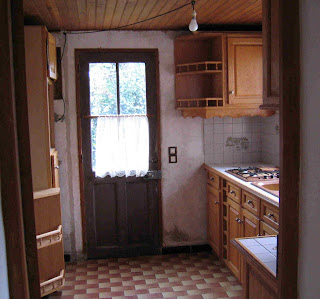 Over the next couple of days we had eliminated a lot of the grotty brown paint by undercoating much of it in white. That was already a great improvement. I also got the kitchen walls painted in an off-white. This brightened the place up no end and covered up many of the DIY bodging scars that were everywhere. 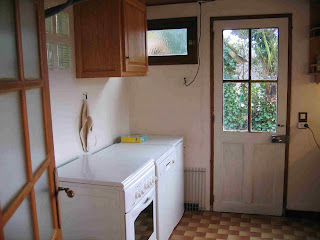 By the end of the week we definitley felt we were making progress. But in reality we had hardly scratched the surface - literally !

more of the same DIY, Paint