NEWS, SOME GOOD, SOME BAD 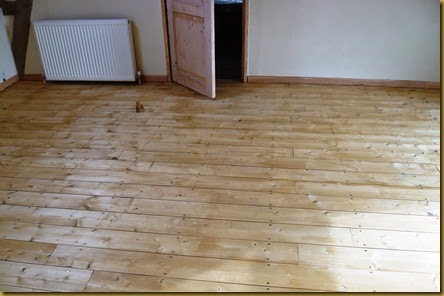 The good news is that our new floor is fantastic.  It no longer slopes towards the door but is beautifully level and ready to have our furniture put back in the room – without the numerous bits of wood that we previously had to use to chock everything up so it didn’t fall over! 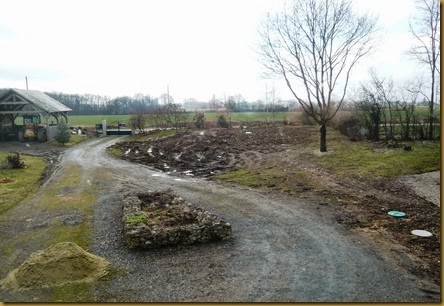 The disappointing news is that even though the previous two weeks were fine and dry, the contractor didn’t come to do the drive as we had expected.

Now, after a weekend of rain, it is wet and muddy again and in a much poorer condition. If he was waiting for it to dry out in order to do it (the reason given for not starting the job), it looks like we will have to wait even longer before he can start.

Nick is now chez nous to begin the job of taking out the old kitchen.  I will be arriving soon, with the dog and the cat, which will make for a very interesting journey, I’m sure!

On the one hand I can’t wait to see the place again, after two months away.  It now seems unthinkable that for a number of years we didn’t see our little house in Le Grand-Pressigny for nearly six months over each winter.  I do remember feeling achingly desperate to get back each spring. 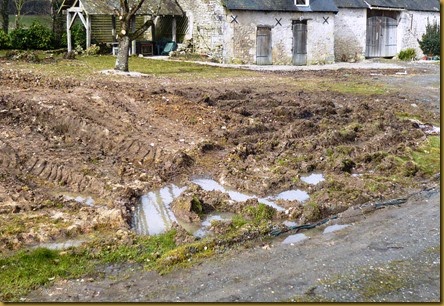 On the other hand, I am really not looking forward to living with the mud.  With the cat, the dog and ourselves in and out of the house and the drive having hardly any dry areas left, it will be impossible to avoid trailing it into every room downstairs.  Maybe I should just give up and resign myself to letting the ground floor get filthy, as trying to keep it clean could be a waste of time and effort.

Upstairs is apparently also pretty bad.  According to Nick the cream carpets in the two bedrooms (a difficult colour to keep clean but not our choice as they were in when we bought the house) are rather grubby where the boiler man left his boot prints when he fiddled with the radiators. 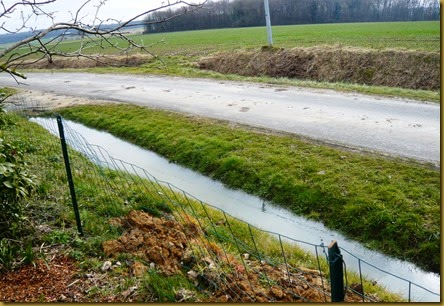 Still, we are lucky that the major job, the fosse, is now done.  There is however the unexpected effect on the ditch to resolve.  The waste water from the fosse is clean when it discharges into the ditch by the road, which with the recent heavy rain, is now quite full.  The entrance to the drive forms a dam that prevents the water running further down into the next part of the ditch, so maybe we need a pipe underneath it or something like that.

It feels a bit like “two steps forward, one step sideways” at the moment, but all in all it’s good progress. So long as you don’t mind the mud!

more of the same House repairs