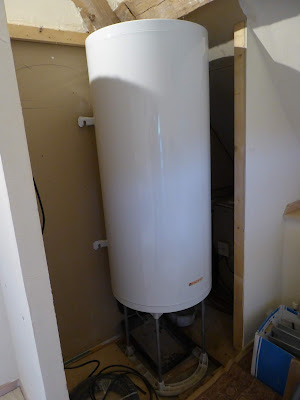 When we bought the house there was an electric hot water heater and tank already installed, in a cupboard upstairs.  It worked but it had annoying quirky features.
Firstly, it appeared not to have a thermostat.  Numerous friends have said "of course, it MUST have a thermostat" and crawled all around underneath it to try to find one.  There was no thermostat to be found.  We considered installing a timer switch but this was a very complicated business, so we continued to manage our hot water supply in exactly the same way as the previous owners of the house.  By switching the thing on at the fuse board for an hour or so every morning, which would provide enough hot water for our needs all day.
If we forgot to switch it on the water was barely warm and if we forgot to switch it off it was almost boiling, dangerously so, with a risk of scalding, suggesting that the tank had been set to near maximum temperature when it was installed.
Secondly, the drain that pipes away the small amounts of expansion water that are produced continually was not connected and instead there was a bucket underneath the tank to collect the drips and that we had to remember to empty regularly.  The absence of a pipe also meant that emptying the tank would be a tricky job. 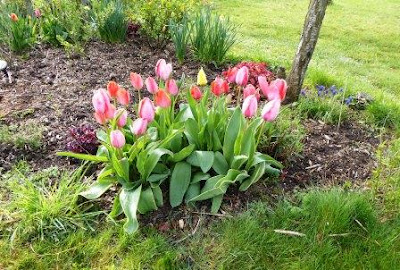 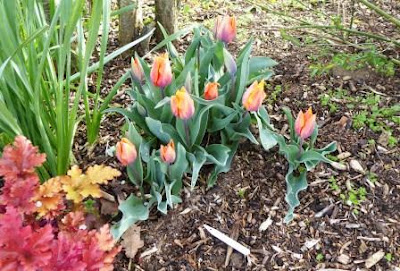 Arriving in late March, our tulips were in full bloom, much earlier than they would have been in the UK, which is a total joy as they are my favourite flower. 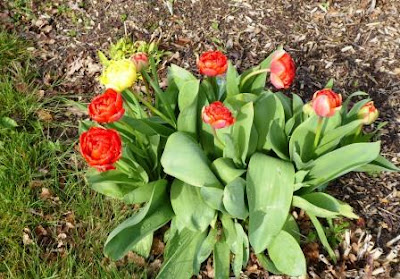 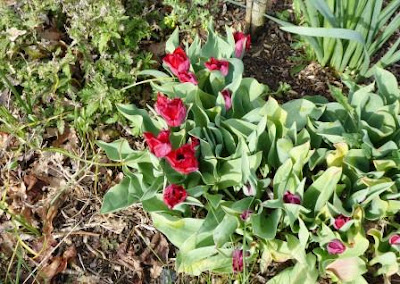 And of course you may well wonder why I have jumped from hot water tank to tulips but that's because however busy we were, we took time out to admire the tulips.  There was a lot to do but life is too short to let a whole year's tulips pass us by. 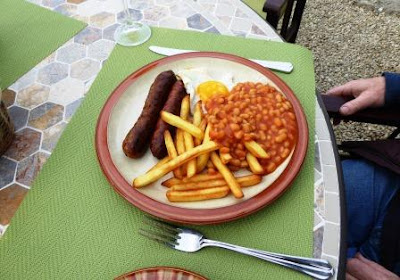 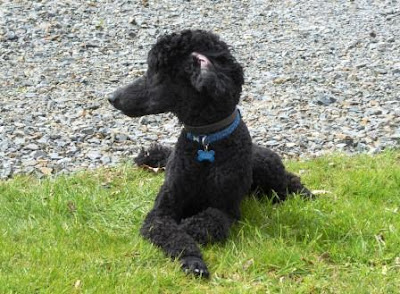 Changing the hot water tank is a big job and we decided to do it as part of the improvements upstairs.  Apart from anything else, working upstairs would be very uncomfortable later in the year due to the heat so early spring was definitely the time to get on with it.  However, we still enjoyed eating outdoors (English sausages and baked beans, French eggs and oven chips on this occasion) and spending some quality time with Hugo.  All work and no play make Jack a dull boy and all that. 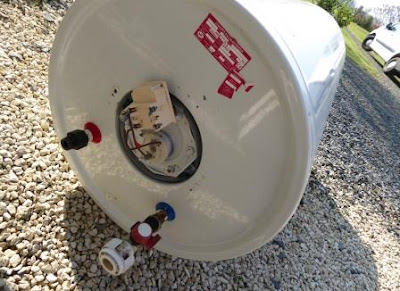 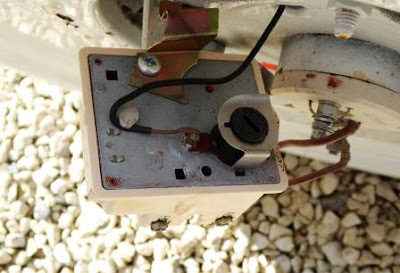 Thirdly, we guessed that the tank was probably getting on for twenty years old and therefore full of limescale, so that was another good reason for changing it - a new one would be more controllable and more efficient.  But, more than anything, I was heartily sick of faffing about with the switch on the fuse board every single day!
Because of the lack of drain it took one and a half hours to empty it, bucket by bucket.  Getting it out and down the stairs was quite a feat but at last the damn thing was outside.
Close inspection revealed that there WAS a thermostat, it WAS set to almost maximum AND was mounted in such a way that it was indeed totally impossible to find it, never mind adjust it.  Also, the tank rattled as it rolled on the floor, confirming that it probably had a thick coating of limescale inside. 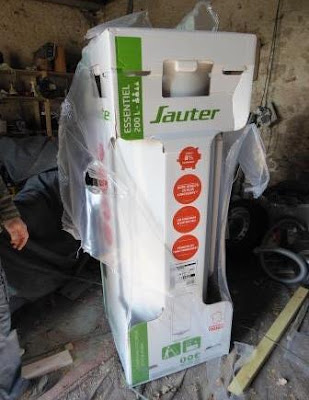 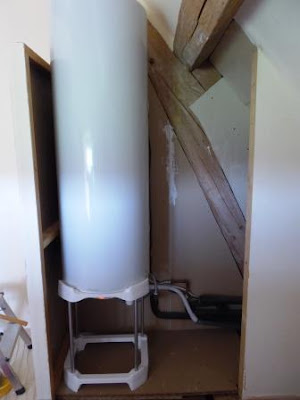 And so here is our brand new, pristine, gloriously efficient hot water tank.
We can switch it on when we arrive and switch it off when we leave, weeks or months later, enjoying constant hot water as we need it in between.  Nick has rearranged the plumbing inside the cupboard that it lives in to make better use of the space, has connected up the drain so that we don't have to worry about a bucket overflowing and we can drain it easily when we like.
The only down side is that the new tank is a bit taller than the old one so that the cupboard will have to be rebuilt but that's just another job......and we will have more useful storage inside the cupboard than before.  A win, win situation. 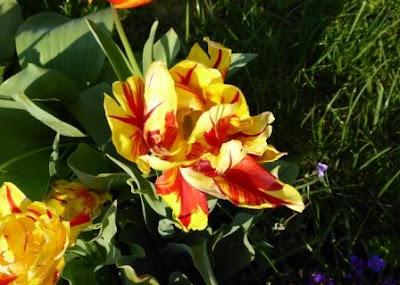 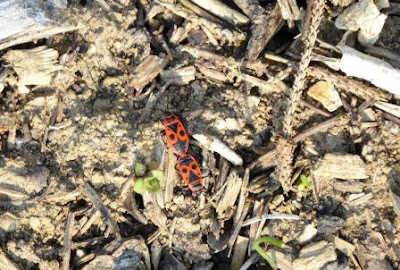 The tulips are all finished by now, which is more than I can say for the work.  As always, it has taken much longer than we thought.  The finishing off has required numerous trips back to the Brico shop as snags and complications cropped up and in fact is not altogether done yet.  But for lovely, constant, effortless hot water - it will have been worth the effort!