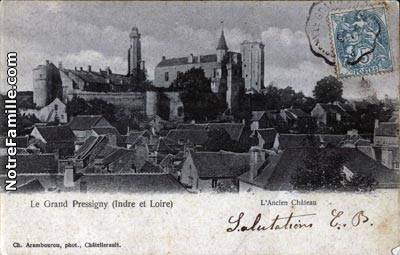 Old postcard picture of the Château and surrounding houses, one of which was to become ours this very afternoon.
After checking the house over, i.e. that it hadn't burnt down or fallen down (it's been standing for probably 300 years so why should it fall down now?), off we went to the Notaire's office.
We were both very nervous but in the end the whole legal bit had elements of all my favourite comedy programmes; Fawlty Towers, Allo Allo and Yes, Minister. 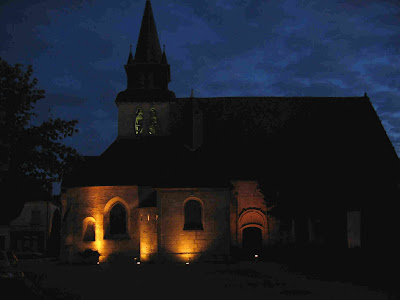 The church at Le Grand-Pressigny at night.
We arrived at the same time as the vendor, Mme Beranger and a Mystery Woman who we took to be one of her daughters. The story from Antony was that after Mme Beranger's husband died five years ago, her daughters were insisting that she sold the property so they could cash in their inheritance. Such is French property law.
In reality she was not too interested in the house. It had been in her husband's family for several generations but for the last thirty years had been used as a holiday home and she now lives in Paris. After she was widowed, Mme had hardly been there at all and it had been for sale for about a year.
In the office, as well as the Notaire, there was Nick, me, Antony, Antony's colleague Phillipe, Mme B and Mystery Woman, all sitting in a line across from the Big Desk.  As things unfolded it transpired that Mystery Woman was not a daughter but Mme's sister-in-law who had turned up to make sure she also got her share of the cash!
The contract was brought out and each page explained to us. This was not easy. Our French was better than the Notaire's English and of course all the text was, as you'd expect, in French. Antony and his boss also chipped in as Mme and Mystery Woman looked on with arms folded and a very severe expression. This took about twenty minutes, but we were actually in there for TWO HOURS. 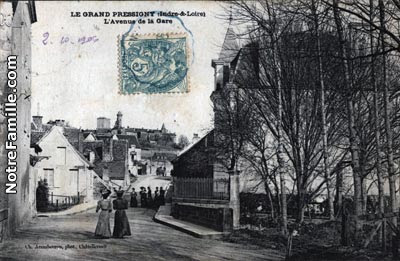 An old postcard showing the other end of the village.

The railway station was there, down by the river and it was much busier then than it is now.

Most of this time was taken up in sharing out the money (our money). Whilst Nick and I looked on in amazement, not really understanding what was being said, calculations were made on bits of paper by the Notaire as he argued with Mme as to how much there was and who gets what. Although the contract had obviously been prepared well in advance, nothing else seemed to have. We realised that all the other people in the room were there to make sure they left with a cheque - and so they did. Every payment made was explained to us at great length, presumably because the Notaire was dishing out our money. The last straw for Mme was when the Notaire raised the issue of the additional contract we could sign that would ensure that if one of us died the other would automatically become owner of the property without payment of any tax, the "clause tontine". This had not been prepared in advance so a secretary was duly called in to type one up. We thought Mme was about to explode.  This change in French property law had only been introduced earlier in the year and Mme had to have explained to her repeatedly why we were able to do this yet she wasn't. 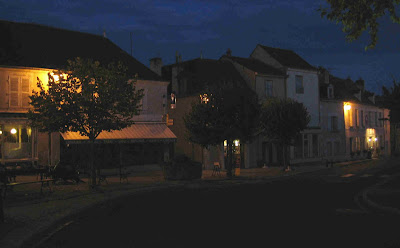 Place Savoie Villars and the hotel at the far right.

She was not a happy lady. Not only had her daughters persuaded her sell the house, but by the time everyone had had their share there was not that much cash left for her.  She also gave Antony a ticking off for having taken so long to sell it and for not getting as much as she wanted for it! Nick and I had to avoid exchanging glances for fear of bursting out laughing. Either that or bursting into tears.

At 5.00 pm we left the office, cheques having been written and handed over, handshakes were exchanged and we received a bundle of keys from Mme. They were all huge old iron things, like church keys, and they all looked different.
However, our afternoon of entertainment, French bureaucracy style, was not over. Antony had mentioned that we could take over Mme's insurance policy for the house if we called at the Insurance Office around the corner. As we needed insurance and just wanted to get it all done and dusted so we could get on with owning the place, we thought "why not" and he escorted us round there. To this day I have no idea why arranging a policy should take ONE HOUR, but it did. The insurance agent was waiting for us with Mme's dossier on his desk. He had the tidiest desk I have ever seen in an office and if he said "tout à fait" once, he must have said it fifty times. We were very tired, having spent two hours already trying to keep up in French and having had far too much excitement for one day. Somehow we managed to come away with an insurance policy at a sensible price. At 6.30 pm, one hour late and absolutely shattered, we arrived at the PreHisto to join Barrie and Lucie for apéros. We then marched up the hill with our bundle of keys and although they were all different shapes and sizes, they all fitted the front door.
At last, it was ours.
We had arranged to spend the first three nights at the hotel in the village. We went to Chez Grand Ma for dinner with Barrie and Lucie and celebrated our new status as home owners in France.  At 11.00pm we emerged, rather tiddly and very happy.
It had turned bitterly cold. We couldn't be bothered to fetch our luggage from the car but let ourselves in to the completely dark and deserted hotel for our first night in Le Grand-Pressigny. The hotel owners looked completely baffled when, at 8.30 the next morning, we brought our luggage into the hotel and then sat down to breakfast. We didn't have the energy to try to explain it to them.

more of the same Paperwork