MOVING IN, CLEANING UP

We got the keys to our liitle French cottage on Friday, 9th November 2007 at 5 pm. Having spent our first night in the hotel in the village, the next morning we wandered up the hill towards the château and our new home after breakfast. It was a bright but chilly morning and the house felt extremely cold. 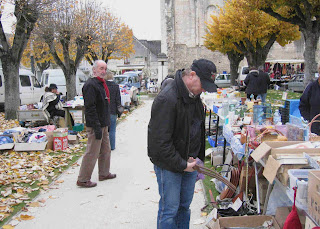 Barrie and Lucie had suggested we went to a vide grenier which was taking place at Beaulieu-lès-Loches, to look for any bits and pieces that might come in useful. We had brought with us a basic set of crockery and cooking utensils, also some camping chairs. Obviously, as all the furniture was unexpectedly (but thankfully) gone, we needed a lot of stuff. One thing we wanted to buy was a doorbell as Mme had taken the original, along with everything else.
Whilst we were there, we bumped into and were introduced to Pascal, the plumber in our village. This was lucky as we needed to engage his services to get the chimney swept. This would have to be done ASAP to comply with our insurance policy so that we could light our fire. (We also needed to order some logs from Michel, the log merchant.)
. 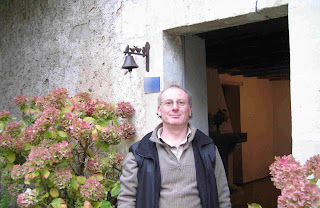 Our next stop was the bed shop in Loches and somehow between us we managed to get a king-size bed into our VW Golf - the base was in two pieces with wooden slats and the mattress folded in half to stuff into the car. Barrie and Lucie helped us to winkle it back out of the car and into the house. That was one hurdle over. 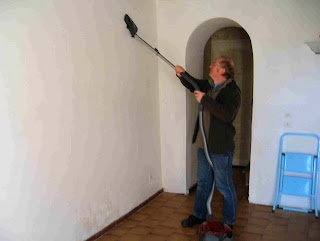 In the afternoon we started the clean-up. To be fair, it was not very dirty at all. There were certainly a few cobwebs and some dust but otherwise nothing too gruesome. Barrie and Lucie had loaned us their vacuum cleaner for the weekend and, with the few cleaning materials we had brought with us from home, we soon had the downstairs clean enough. So far, so good.
We spent a second night in the warmth and comfort of the hotel and the next day was Sunday. It was also Nick's birthday and Armistice Day. We watched the parade through the village in the morning and followed the procession into the little square behind the church where speeches were made and ALL the names of villagers who had lost their lives in the two wars were read out. It was very moving and this was our first taste of village life in rural France. We were somewhat overwhelmed to think we had just become part of this village and I would go as far as to say we felt rather humble, too. 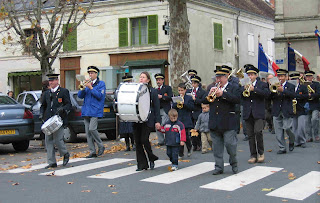 Afterwards huge numbers of people wandered up to the Salle des Fêtes where there was wine and nibbles for everyone, including us. Barrie and Lucie introduced us to the Maire and one or two other people. We met a few of the English residents, too, including Alex and Nicole, who had almost finished renovating their first gite and who Barrie thought might be interested in doing some gardening and handywork for us. In the afternoon we pressed on with the cleaning, making notes of shopping we would need to do pretty soon; light fittings, loo roll holder, blind for the bathroom, table, saucepans.... the list was endless. With all our available electric heaters going full blast, the house was just beginning to feel slightly warmer than freezing. We were very much looking forward to getting some logs organised so that we could light a fire in our magnificent fireplace.

We retired to the hotel for our third and last night. We were the only guests and ate alone in the dining room that evening as we celebrated Nick's birthday and our first days of French village life. Tomorrow night would be the first in our own little house and we were looking forward to it very much. Neither of us mentioned it to the other but we were also very nervous, too.