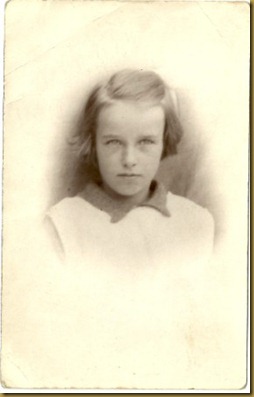 This little girl was born in January 1928.  She was a shy country girl with a mischievous sense of humour, the youngest of eight children.

She married a handsome sailor, had two children herself and worked in a knitwear factory where she once mended King Farouk’s underpants.  Not many people know that.  She rode pillion all over England, Scotland and Ireland on the back of a BSA motorcycle.  She loved her home in the country and enjoyed holidays in Cornwall and Scotland with her sailor.  She once went to France but didn’t reckon much to it.  She died four days before Christmas in 2002. 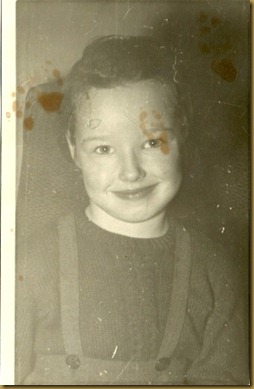 This little girl was born on the 11th December 1951.  She was a bit of a tomboy and spent most of her spare time climbing trees, collecting tadpoles and playing cricket with her male cousins.  She seemed to spend a lot of time in a sidecar attached to her dad’s motorcycle.  She went to university, has skied down mountains, dived the ocean, sailed, windsurfed, canoed, ridden a Harley-Davidson all over Europe with her husband Nick, and once drove a steam engine.  Not many people know that.  She has a little house in France and almost as many friends there as she does at home and is really looking forward to her next visit.

She misses her mum on the day she turns sixty but she is looking forward to her family coming over for her birthday.  It’s roast lamb and tiramisu for lunch, two of her favourites.  Happy days.

more of the same Family, Thoughts