Having an overnight stay in Calais on the way down to the Loire was good in one sense – it broke the journey and gave us all a rest, which was important for my dad as he hadn’t travelled so far from home for many years.  The down side is that it took us virtually 24 hours to get from Derbyshire to Le Grand-Pressigny.  In other words, the journey time was doubled and we still arrived very tired and a bit crotchety, which is how we are when we do the journey in one hit, taking twelve hours. 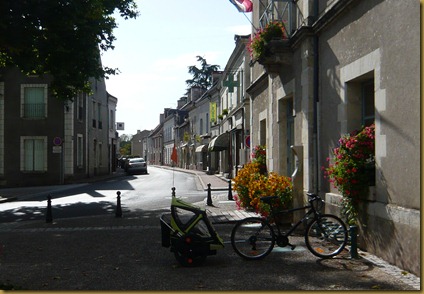 However, we had made provisional arrangements to meet up with our friends Chris and Gail in the village square on our first evening.  So we had a reviving cup of tea, did a little unpacking then all marched down the hill to meet them.  Me, Nick, my dad and Lulu.

As we left the house we were greeted first by Mme André, our neighbour, who was very pleased to meet my dad and wished him a happy holiday, in French of course.  On our way out of the courtyard we bumped into the Parisian couple who have the holiday home opposite ours.  They shook hands with us all, gave Lulu a scratch behind the ears, and, practising their English, wished us a pleasant evening and hoped my dad would have an enjoyable holiday with us.  You get the picture. 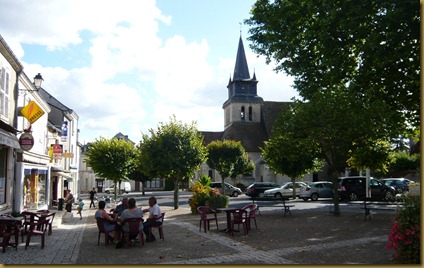 The village square looked very inviting as we went to join our friends.

By the time we got to the square, in the lovely warm evening sunshine, my dad had not only travelled a long way from home but had also met and spoken to more new faces than he had met in a very long time.  He was beginning to get the idea why we love the place so much and why we keep coming back. 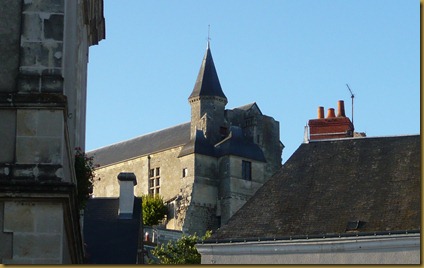 The château viewed from the village square.

As the week unfolded, it was fascinating to see how my dad took it all in and gradually got used to the way things are in our little corner of France.  It was as if we were experiencing it all afresh – as we did when we first stumbled across the place – by seeing how he reacted.  Not that we take it for granted, but we have got used to the nice weather, the friendliness of the people, the different way of life.  Rather like it might have been in Derbyshire in the 1950’s or 60’s I think.

He was quite bowled over, hardly knowing what to make of it all, not quite believing it was real. 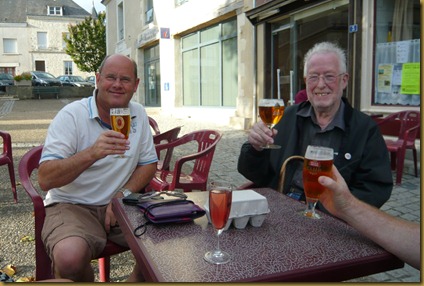 Of course, not everything was good in his opinion !!  Foreign beer took some getting used to.  His favourite beer at home would be Mansfield bitter, or Marston’s.  At a push, Stones.  You can’t get anything quite like that in France and we decided not to risk trying him with the rather light, chilled “pression” at the bar but suggested Leffe Blond.  He almost enjoyed it and by the time he had drunk his second he was definitely warming to it !!