It is now exactly a week since I embarked upon the new adventure.  Being retired.  A lot has happened since then.

We had an awful journey to France, largely because we chose to travel at the wrong time.  The Friday before a bank holiday is not a good time and we knew we were asking for trouble but had no idea how bad it would be. 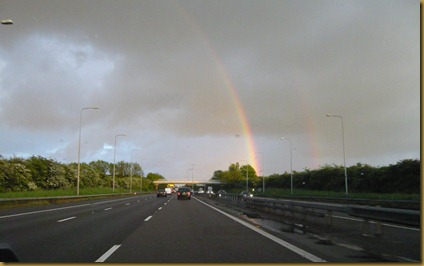 A double rainbow on the M1 in Nottinghamshire.

My experience of Eurotunnel reminds me of the poem by Henry Wadsworth Longfellow.  (I didn’t know who wrote the famous line until I just looked it up!)  “When she was good she was very, very good, but when she was bad she was horrid.”

Suffice it to say that the motorways were incredibly busy as we got further south on our way to Folkestone, and the driving really hard work around London.  The last thing we needed when we got to Eurotunnel was a THREE HOUR DELAY !!  This seems to have come about purely because of the volume of traffic.  The thing I find baffling is when they know how many people are booked onto trains, how does it come as a surprise when they all turn up?

I could rant for ages about where I think they are going wrong but I’m sure there are people much cleverer than me looking into it as we speak.  The upshot was that by the time they got us checked in the trains were running every hour instead of every ten minutes or so, and we arrived at our hotel in Calais at 5am French time – in fact we were checking into the hotel to get a few hours’ sleep at the same time as other people were checking out to set off on the next leg of their journey. 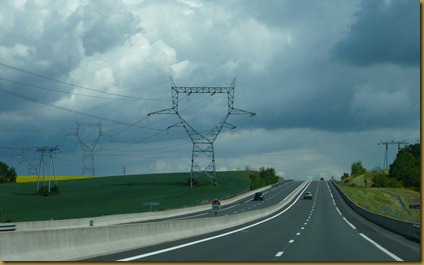 Hardly any traffic on the French side of the channel on Saturday morning.  Most of it had UK number plates.

As usual, driving on the French side of the English Channel was a breeze.  The traffic was light and well behaved – most of the cars and caravans in the north had UK number plates and lots of bicycles strapped to the back. 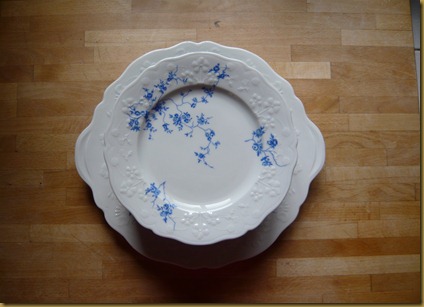 And then there were ten!

All our troubles melted away once we set foot through the door of our little house in Le Grand-Pressigny.  On Sunday we went to a “brocante” at Port-de-Piles near Descartes and I swooped upon this set of crockery.  A large cake plate and eleven small plates, perfect for serving cakes at a party.  And that’s just what I was going to have – a party in France to celebrate my freedom from the drudgery of work.

The plates were described as a “complete service” – the fact that there were only eleven plates means that it had once been a set of twelve where one had got broken – but for only four euros it was still a bargain.  Then I found one was cracked so in the end there were only ten !! 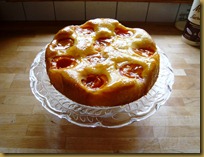 The programme for our party was:

7pm (or thereabouts) barbecue (food and more wine) (weather depending)

For the afternoon session I made, from top left, raspberry and lemon mini muffins, rustic apricot tart, lemon drizzle cake, coffee, almond and blackcurrant cake, chocolate Guinness cake and coconut macaroons.  If you click on the picture you will find a link to the recipe I used (some modified slightly).   A beautiful strawberry and rhubarb tart was also provided by Walt. 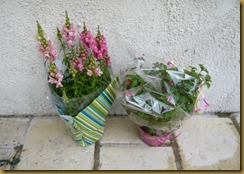 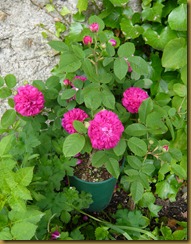 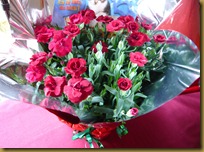 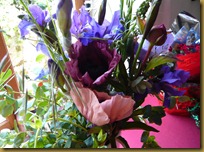 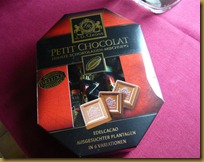 We were incredibly lucky with the weather.  Not only did we have very little rain, but the sun actually came out and for all the afternoon and most of the evening we were able to sit outside.  We had planned the menu so that we could barbecue if the weather was good but cook it all indoors if it was raining.  We were very pleased to be able to barbecue outdoors after all.

It quite took me by surprise that so many people brought me lovely presents.  There were flowers, plants for the garden, chocolates, numerous bottles of  wine and a beautiful set of Portmeirion cake forks.  Our guests obviously know me rather too well !!

I was far too busy organising the food, chatting and generally thoroughly enjoying myself to take any photos of the “do”, but it was a very special day for me.  There were a few notable absences – it was impossible to time the party for a day when I could invite everyone I would have loved to have been there – but those people will be feeling the warmth of my friendship some time soon I hope.  It was lovely to see all those who were able to drop in, whether for just a few minutes until the bitter end.  One of the greatest joys of having found our little home in France is the number of friends we have also made and it was lovely to have so many of them around to help me celebrate.

Nick did a fantastic job with the cooking, producing a huge amount of stuff on our little barbecue as well as a very popular chicken curry (to a Hairy Bikers recipe which you can see here.)  Gaynor brought a platter of salad that was a work of art in itself, and other guests, large and small, chipped in with the serving of food and the washing up. I was also thrilled and rather proud that we could fit eighteen adults, four children and two dogs into our tiny house all at the same time and have somewhere for most of them to sit and a plate, fork and a glass each.  I do however apologise that in the end I was so “tired and emotional” that I completely forgot to serve the cheese !!