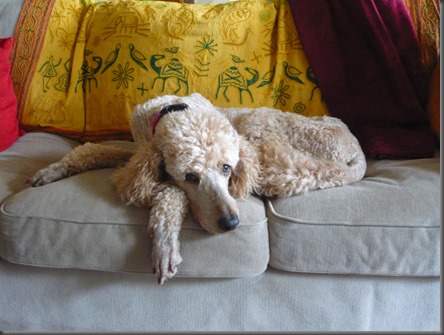 Our joy in getting back our old Lulu did not last very long.  We collected her from her hospitalisation at the UK vet's last Friday evening, full of vitality and brought her to France with us on Saturday, but on Tuesday morning I thought I noticed signs that all was not well.

She deteriorated fast, as they had warned us she might. After her teatime walk on Tuesday she was obviously in distress and took to her bed where she stayed for eighteen hours.  An appointment was made with our vet in Descartes for Wednesday afternoon. 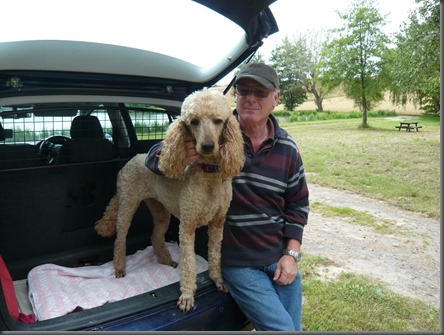 We got her up at lunchtime and after pottering around the garden she came with us for one of her favourite walks around the lake at La Celle-Guenand.  We all like that walk and it’s on flat ground so not too taxing for a dog that’s feeling poorly.

The vet in Descartes was wonderful.  We showed him the report of her illness and treatment and he said he would take another blood sample.  Our hearts sank.  If we had to wait another two days for the result Lulu would most likely be in a terrible state again by then, and we didn’t want that to happen.

But no, the surgery is well equipped and after a last walk around outside, amongst the flowers and trees, the result was in and showed that her kidneys were in a very poor state.  With no other treatment available and no future for Lulu except pain and feeling ill, we decided to have her put to sleep there and then, before she became as ill and distressed as when we first took her to the vet in Derbyshire.

Anyhow, that’s where we are.  Doing the right thing never feels right afterwards and now we have to adjust to a life without Lulu.  It won’t be easy.

more of the same Lulu