OF BRIC A BRAC AND FLOWERS

We are partial to a bit of bargain hunting when in France and with brocantes or vide greniers going on most weekends throughout the year there is plenty of opportunity for it. 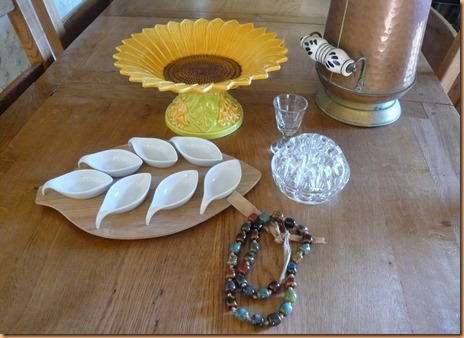 Apparently I took this picture on 27th March, which was a Monday, so these items were obviously acquired at a brocante on Sunday 26th.

The thing is, I can’t actually remember where it was.  I remember certain things about it, such as the set of little china dishes being brand new and unused in their original box and I thought that for 1€ they might come in handy for all kinds of things.  Afterwards I wondered why on earth for only 1€ each I didn’t buy both of the two boxes she had, especially when at the first use of them later I dropped and broke one! 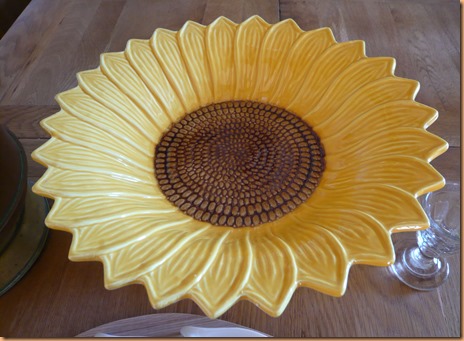 I remember spotting the cake stand on another stall under a pile of bits and bobs.  It’s definitely one of those love or hate items.  I love things like this, a bit quirky and not necessarily in the greatest of taste but for 2€ I thought I would risk it.  In the end it turns out to be more of a fruit bowl as it’s not flat enough for a cake but I think it looks great when full of fruit.

We rarely pay much money for anything at a brocante, that’s a great part of the fun, consequently we don’t haggle over the price that often.  Only if the stall holder is asking more than we think it’s worth do we try to knock them down a bit.  Some do indeed start at a high price expecting to get a bit less.  But when items are only 1€ or 2€ each, haggling over them seems rude! 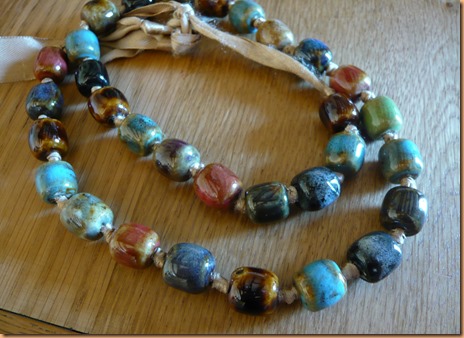 This necklace was a terrific bargain for 2€.  The beads are china and would retail for probably £1 each in a UK bead shop.  I have bought a lot of jewellery at French brocantes and in UK charity shops but nice beads are becoming increasingly difficult to find.  On close inspection a lot of the “jewellery” for sale is cheap and nasty stuff made of plastic beads, which are not much use to the discerning jewellery maker. 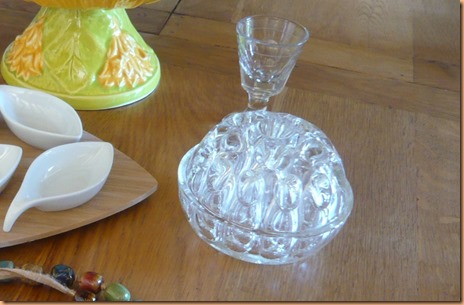 Of the other things, the little glass rose bowl is something I have fancied for a while but clean examples in good condition do not turn up too often.  A lot of the brocante we see is not transported very carefully and stored in barns or outhouses between events so they become dirty and damaged.  Some stall holders clean their stuff up before putting it on sale but most don’t.  The little holes in these rose bowls are difficult to get the muck out of and I’m also a bit choosey about chips.  I don’t mind using secondhand crockery once it’s been through the dishwasher but I don’t buy anything that’s chipped or cracked, regardless of how cheap it is.

The little wine glass is one of those very old hand made glasses that Nick is collecting and the coal scuttle was a really good buy at just 2€.  We obviously don’t use coal but it’s handy for stashing other fireside stuff.

So we did really well at our first brocante of the year, wherever it was. 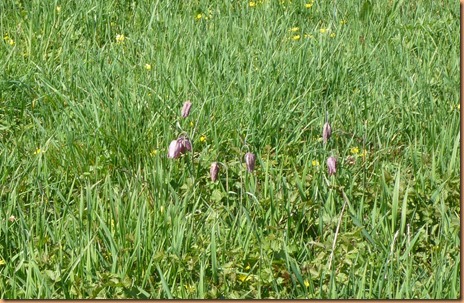 Now to the flowers.  On 29th March according to my photos, our friend Susan of Days on the Claise turned up and asked if we wanted to go with her to see a field full of fritillaries, those lovely flowers with snakeskin like petals that apparently don’t grow in too many places in this part of France.  You do see clumps of them in ditches here and there but a whole field full of them was a sight to behold.  The other thing about them is that they do not hang around for long so this was our chance to get a good look and off we went.

One thing that strikes me about this picture is that even though the trees are completely bare because it was only the end of March, Nick is in his shirt sleeves because it was a lovely warm day.  That’s one of the things we love about our little corner of France so much, by the end of March spring is in full swing and it is often lovely and warm.

The Live Writer programme is up and running again.  It’s little hiccup of not publishing pictures seems to have been fixed, but now that I have posted using Blogger I will not be so nervous of using it again if I need to.