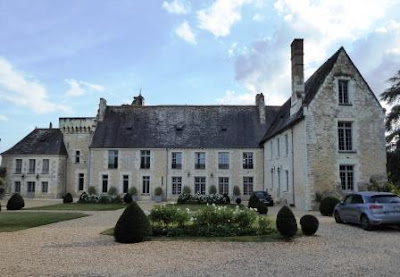 On leaving La Chartreuse du Liget we headed for another place on the list of châteaux and monuments open for the weekend of the Patrimoine. 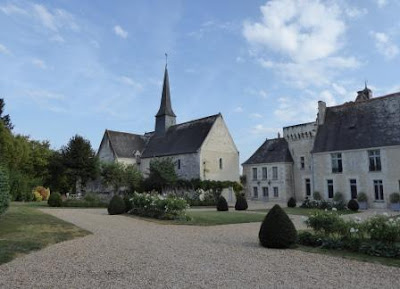 We had never heard of it before:  the Château Saint-Jean Saint-Germain.
According to our map the village of Saint-Germain was off the the road from Loches to Perusson so off we went in search of the château.  We couldn't find it.  We drove up and down the same roads, round and round the village and nowhere could we find what we were looking for.  Just as we were about to give up and go home for a cup of tea, we turned around and went through the village the opposite way and there it was, behind a wall and a huge pair of gates.  We had driven past it several times already.
Then we couldn't get in.  The gates were firmly locked and there was no sound of life from inside.  They were too tall to see over so we went around the wall to see if there was another way in, which there wasn't.  Feeling miffed that we had found it at last but still couldn't get in to see it, we headed back to the car just as the gates opened silently and a small group of tourists stepped out.  The guide spotted us and ushered us in.  Hoorah! 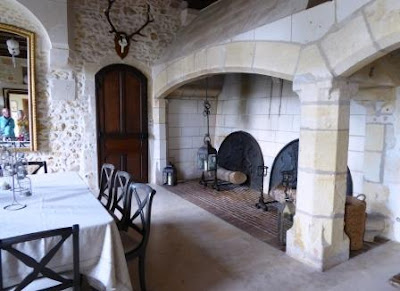 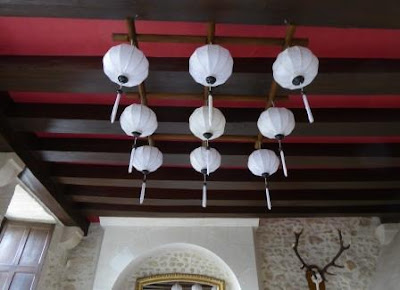 According to the guide the château was bought only a few years ago by someone from Loches who originally comes from the village of Saint-Germain.  Bits of it date back to the eleventh century and when he bought it, it was in dire need of repair and renovation.  The new owner has made a good start and finished a few rooms on two floors.  I have to say it is really well done.  If I were ever to buy a château myself and do it up, this is how I would want it to look.  The stylish modern touches blend really well with the traditional stonework, fireplaces and other features. 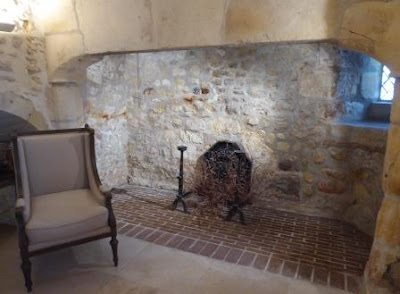 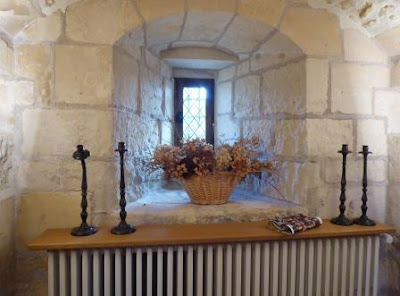 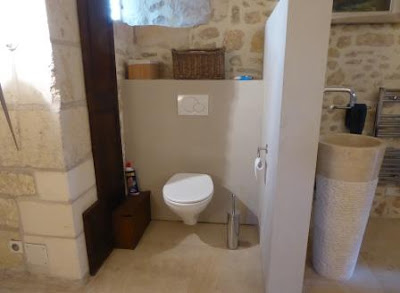 Having had a brief look at the dining room the next room we were able to look at turned out to be a cloakroom / bathroom. 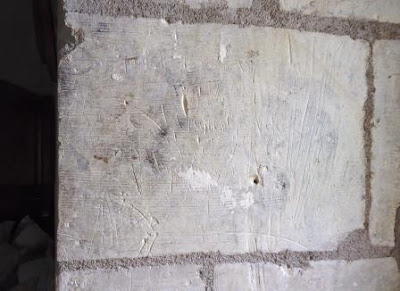 Then we were ushered rapidly upstairs.
By now we had got the message that although photography was permitted, the guide was keen to get us round the château and out again as soon as possible.  Most of the questions we asked she didn't know the answer to, which I thought was odd, but I suspect she just didn't want to spend the time explaining things.  Such a contrast to other guided tours where questions would lead to lengthy and tedious explanations going into enormous detail. 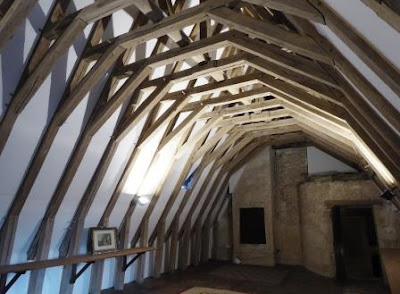 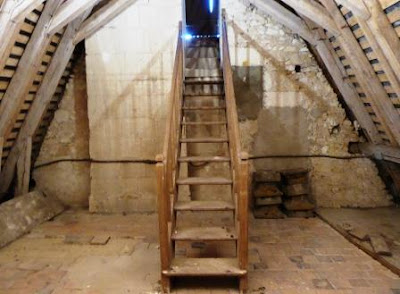 Next stop on our whistlestop tour was the attic.  Before I realised what was happening we were heading up the rickety steps onto the roof. 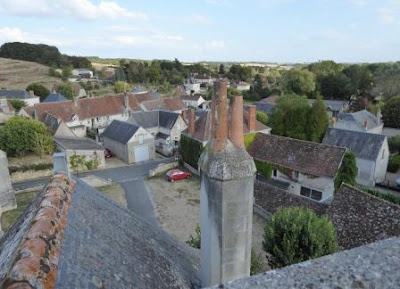 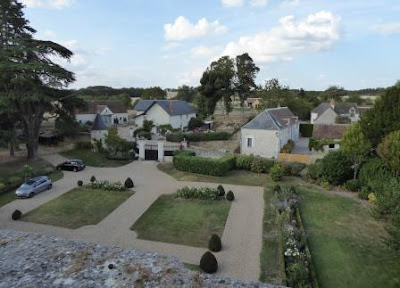 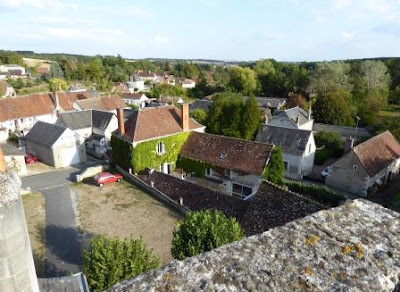 This is most definitely not something I would normally do.  In recent years I have suffered more and more from vertigo and given the choice wild horses would not have got me up those steps.  Too often I have found my legs freezing up in similar situations but maybe this time, because it was all done so fast in a matter of fact kind of way, I somehow managed to launch myself up and out onto the roof. 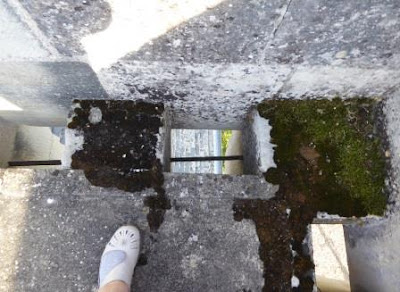 The guide was busy pointing out interesting things to be seen from the roof when she suddenly said "mind the holes!".  Looking down I saw that there were gaps in the floor between me and the wall that I had not noticed.  I took a couple of steps backwards and stayed well clear of the parapet after that. 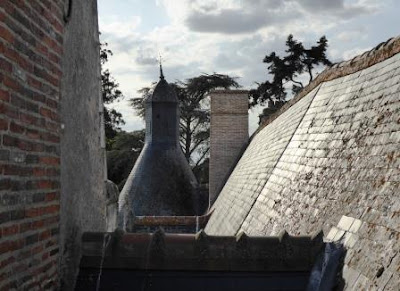 Having completed our visit to the roof we headed back down the rickety steps - possibly even faster than we went up. 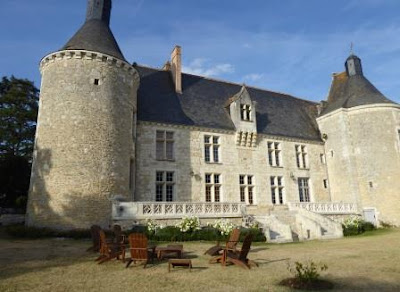 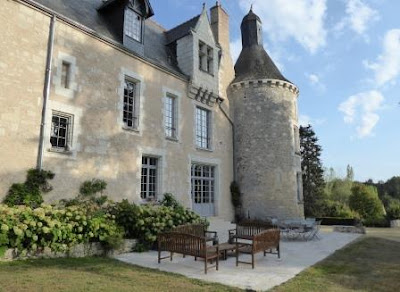 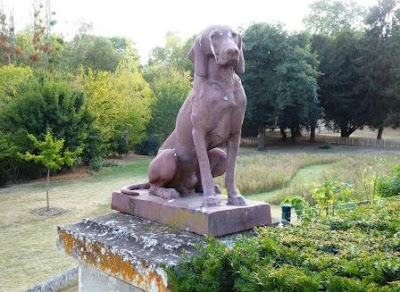 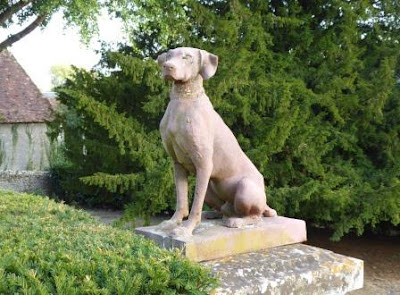 The outside was just as gorgeous as the inside.
The guide pointed out a few outdoor features, then marched us back round to the front of the house and out we went. 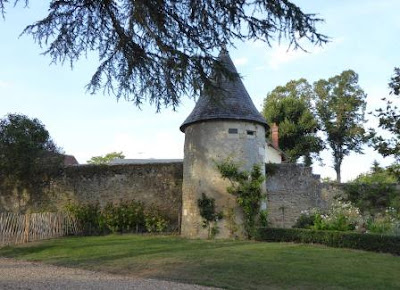 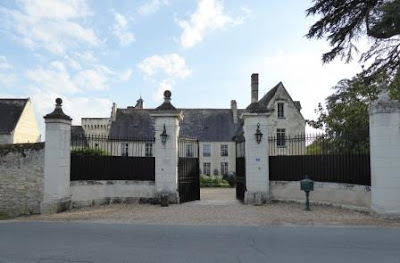 She had no idea what the little tower in the courtyard was for and with a quick goodbye ushered us out into the road.  We stepped across the road to our car and as we looked back, the gates were already closing behind us.
We had seen all there was to be seen in about twenty minutes!
We headed home for that cup of tea and sat outside enjoying a lovely warm evening.  We then had a barbecue, just a simple affair using what we had in the house, but it seemed sensible to make the most of the late summer weather and outdoor dining.  We stayed out until well after dark, listening to the owls, the foxes, the deer and the crickets. 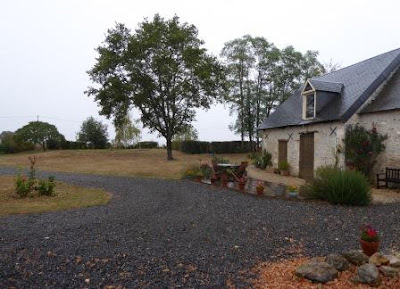 At some point during the night someone flipped a switch and autumn arrived!
It was raining when I took this picture the next morning and the grass that you can see which is completely brown has by now turned green again.  The whole garden sighed with relief as the rain fell and many of the plants that were brown and droopy are now lush and thriving again.  Sadly, a fair number have given up completely, including the standard rose that was a gift from friends after Lulu died.  It was suffering in the heat but it was the activity of a mole around its roots while we were away that finally did for it.
For ten days now the weather has been mixed, much cooler with plenty of rain.  Part of me misses the warmth but the other part is glad to see normal weather return.