TWO ANGELS IN ONE DAY - PART ONE 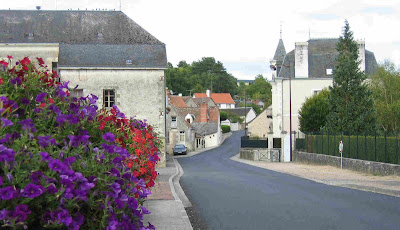 A view of Le Grand Pressigny
Some people believe in guardian angels. Some believe in fate. I'm not sure what I believe in but things started to go right and an amazing coincidence happened on Saturday 18th August 2007.
ANGEL NUMBER ONE - ANTONY
After breakfast we went to Descartes to see what Lochois Immobiliers had to offer. There we were greeted by Antony the Agent - our first angel. Bless him, he was such a sweetiepie and he had a sense of humour and he spoke a little English. I almost feel ashamed to admit we heaved a sigh of relief. Not only were we able to communicate with him, he also understood what we were looking for and was keen to help. Not just keen to flog us a huge dilapidated renovation project just because that's what the English usually buy.
We sat in his office and looked through his folder of properties for sale and he would comment on each one along the lines of "this one is too big for you" or "this one needs too much work" or "that one is overpriced" or "that one floods". After an hour we had picked out 8 possible houses. He told us to go for lunch and come back at 2.00 pm by which time he would have 4 houses for us to look at in the afternoon.
We wandered down the street to the Saladerie with two hours to kill and had a lazy lunch, wondering what the afternoon had in store for us. When we got back to Antony's office he was all ready to go with information sheets printed out for 4 properties that afternoon and 4 more on the following Tuesday (they were closed on Mondays). What an incredible difference from the service we had previously received from other agents.
The first house was in a small village not far from Descartes. It was a tastefully restored old house but more of a family home than a holiday home. Not for us that one. 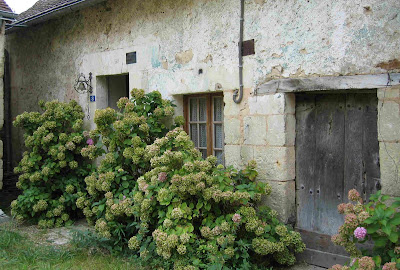 The elusive cottage "au pied du chateau"
Next we went back to Le Grand Pressigny. We parked up on a steep hill and walked into the small courtyard. As he approached the house I thought "Oh, I never even noticed this one". It was a small cottage tucked away at the end a row of houses. We stepped inside and it was dark and stuffed full of huge French furniture and "brocante". But it had a lovely feel to it; no odour, the rooms were the right size, there were lovely oak beams and a gorgeous fireplace. Once we had opened up the other doors and the shutters, the sunshine flooded in and we could get a true impression of the place. 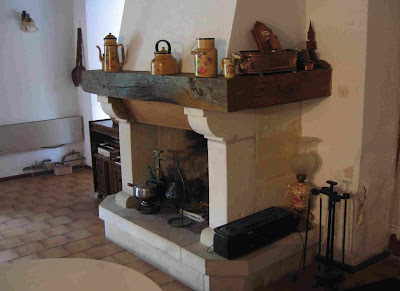 Lots of brocante but a lovely tuffeau fireplace
We explored the house inside and out. Pretty soon I had the "this is the one" feeling.
It met all our requirements:

As we were walking round the house, we already found ourself making plans for what needed to be done to it. Nick fancied putting "lucarnes" in the bedrooms - dormer windows which would open up the rooms to give more light and a lovely view over the village rooftops. The gite we were staying in had these. Also, in the one room downstairs, there was a window on the outside of the house, complete with lintels and hangers for the shutters, that had been blocked up. We thought how much lighter it would make the inside of the house if we could reinstate it.

We could see that the roof on one side of the house was in good condition but the other side would need replacing at some point. Also the electrics and plumbing would need sorting out a bit and there was obviously some damp in the walls. In spite of all this, it fulfilled one of our major requirements.  It was somewhere we could use comfortably as a holiday home whilst work was in progress - and not a major renovation project. 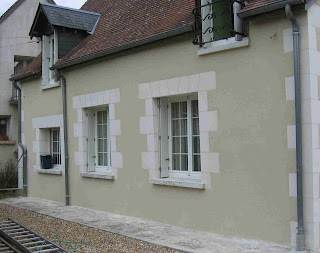 The restored house at Cussay

Antony was keen that we should also see the other two houses he had organised for us so off we went. The next one was at Cussay and, just as he said, it was beautiful. It was right at the top of even our first budget but we could have moved in straight away and it was spotlessly clean. It was an old bungalow, although not as "ancienne" as the cottage we had just seen. It had been tastefully restored with three bedrooms, a modern fitted kitchen and a large garage that had a second kitchen in it for all the outdoor entertaining ! The garden was large with a lovely little vegetable patch but mostly just lawn so half an hour on a ride-on mower should sort that out - Nick had always fancied one of those. 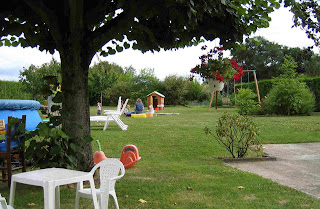 ....with the lovely garden icluding "potager"
Hmmmm.........now we were spoilt. Not one but two possible houses, at opposite ends of the scale in terms of budget and amount of work required. 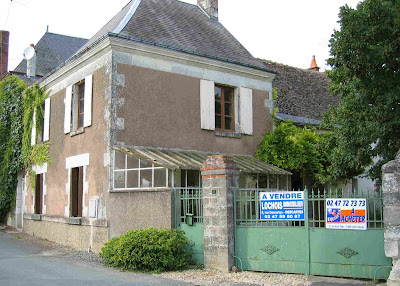 This house had a lovely view of the watertower, just off the picture to the left
The last house was more like what we had been looking at all week. The house itself was probably early 1900's and was in poor condition inside. Lots of work would have to be done before we could even consider spending our first night there. The outside was phenomenal. Attached to the house was a very pretty little old cottage "to do up", there was also a substantial courtyard and garden, a row of "dependances" (outbuildings) that had been a stable block and through an archway a huge orchard / field. The house itself was uninspiring but we could see that someone could do wonders with the rest. (There was however, the unfortunate matter of the water tower that someone had built rather inconsiderately right outside the salon window of the main house!) 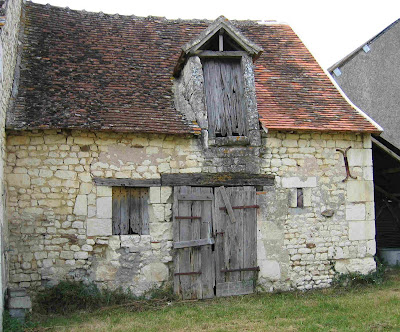 It came with a nice little cottage "to do up"

Not for us, that one. 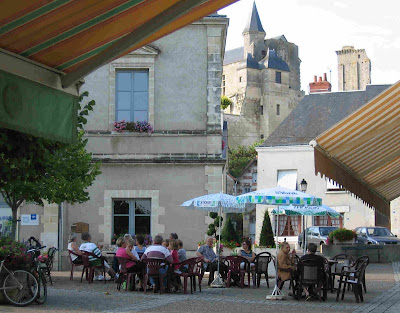 The view of Le Grand Pressigny from the PreHisto bar

We parted company with Antony and arranged to meet him at his office on Tuesday morning to view the next four houses. We then returned to Le Grand-Pressigny and retired to our customary spot outside the PreHisto bar for an apero and a serious debriefing. Having spent the first part of the week feeling quite depressed at the end of each day, this time we had the luxury of two possible properties to choose from. Both completey different but equally suitable.

We had a lot of thinking to do.