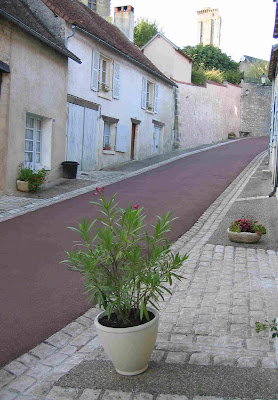 On Friday we handed the key back so that he could get on with the surveys, namely a lead survey and an energy survey.
Our stay in the gite was due to end on Saturday 28th August but M. Duport said that we could stay an extra 3 nights, until the Tuesday morning. The imobilier's office was normally closed on Mondays but Antony arranged to open "exceptionellement" in the afternoon so we could meet and sign the important documents before we left France.
- 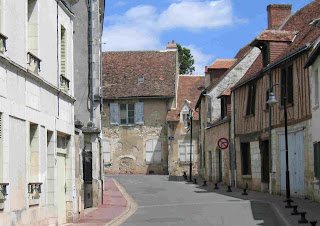 The old town of Descartes
The compromis de vente is the document that seals the deal when buying a house in France. It contains details of the building and the land plus anything else included in the sale. Once signed a 10% deposit has to be paid. At this point the vendor cannot back out or change the price. The buyer can put conditions into the document allowing for him or her to back out of the deal.
In our case we included the condition that we would be able to raise the funds (the most usual condition if a mortgage has to be obtained) and that the repairs for the roof would not cost more than 10,000 euros (about £7,000 at the time). A copy of the document is then sent to the buyer's home address and once it plops through the letterbox, you have 7 days to change your mind. After that you are committed to the sale and would lose the deposit if you backed out. 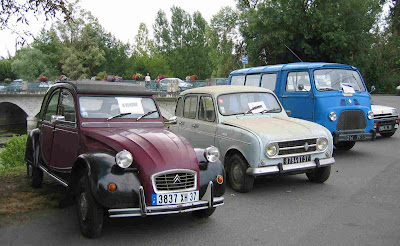 The autojumble at Le Grand Pressigny

Antony was brilliant and got everything organised in super quick time.  Estate agents' fees are substantial in France and are paid buy the buyer. Hence all the cloak and dagger stuff about properties for sale - many agents will get you to sign a document to say you have seen the house with them so that they get the fees, not one of the other agents who also have it on their books.

We wandered past the cottage on Friday and there was a car parked outside.  Over the course of the weekend various cars came and went. These turned out to belong to the surveyors and then, to Mme Beranger herself. Our neighbour offered to introduce us but we declined. We didn't want to get into any discussion about buying her furniture, largely as our French was not good enough for such a conversation. She was there for the weekend and for the meeting on the Monday. 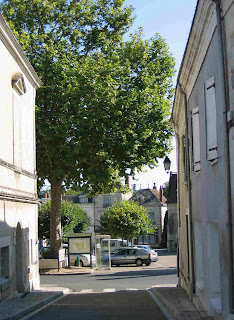 Over the weekend we entertained ourselves by doing some sightseeing. On Saturday we went to Chinon and treated ourselves to a nice lunch in one of the many smart restaurants there. I think we both needed to see the town one more time before we committed ourselves to buying the cottage in Le Grand Pressigny - Chinon had been after all our first choice for location but we had abandoned it when we couldn't find a suitable house.

On Sunday we went to the vide -grenier at Chaumussay. This was a big event and in a very pretty village. We had a great time weighing up all the stuff that was for sale - there was an awful lot of junk but as always there were some really nice things and, now that we had somewhere to put it, we were very tempted. Somehow we managed to be sensible and resist. The ink wasn't dry on the paper yet. 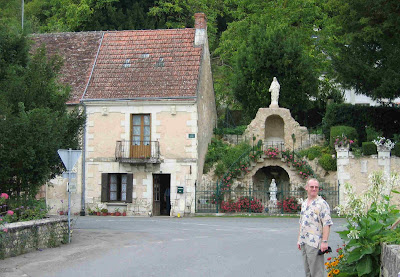 The village of Chaumussay

By Monday morning we were feeling very nervous. So many people had told us tales of how complicated the buying of a house in France could be but I thought it couldn't be that difficult otherwise nobody would do it. And we already knew personally several people who had done it and lived to tell the tale. To pass the time and take our minds off it a bit, we went to Loches in the morning, had a look around the chateau and a good lunch to put us in the right mood. 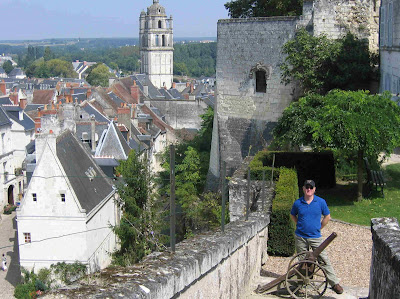 Loches from the chateau

We arrived at the office to find Antony, his colleague Phillipe, a local restauranteur who spoke good English and had been asked to come and interpret and last but not least, Mme Beranger the vendor. They were all looking very serious and I thought for a fleeting moment that Nick might make a run for it. But no, we sat down and got straight on with the business.

The bridge at Descartes

All the details were explained to us by Phillipe in French and then the restauranteur in excellent English.  Every page of the huge document, the compromis de vente, had to be signed and annotated by both of us with the words "prix compris" - price understood. Then Mme Beranger had to do the same. This took quite a while and then - it was over. There was lots of hand shaking and then we were out on the pavement in the sunshine. We said goodbye to Antony, congratulated him on doing a fantastic job and headed back to the gite to pack.

So that was it.

Leaving Portsmouth as we set off on this adventure two weeks before, I never thought it would actually happen. Not so soon anyway. We had bought a holiday home in France. 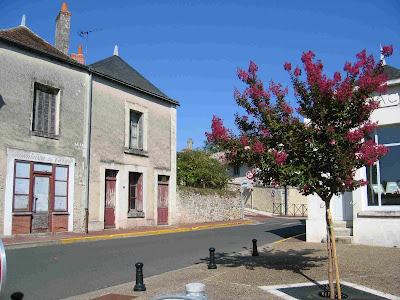 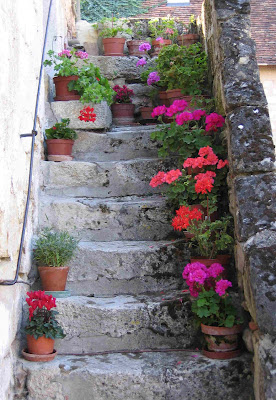 We had discovered a corner of France that we had never noticed before. We had enjoyed staying in a fabulous gite. We had glimpsed peoples' lives as we were shown around their homes. And we had bought a little house of our own and made some new friends.