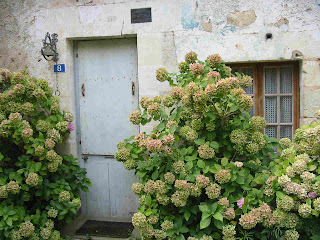 On Wednesday 22nd August Antony the Agent, our Angel Number One, phoned us in the afternoon with the news that Mme Beranger, the vendor, would accept 1,000 euros more than the last person had offered. This meant the house could be ours. We were filled with so many different emotions; euphoria, fear, excitement, panic................. 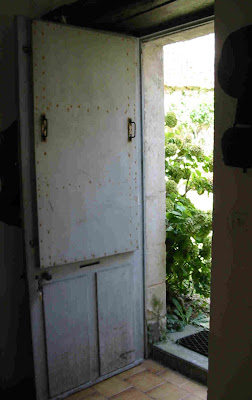 We dashed into Descartes to see him in his office to confirm our offer and talk about the next step. I asked if we could possibly trouble him with a third visit to check a few things out. We came away with the key !!!
We had arranged to meet Barrie and Lucie in the bar to tell them how we had got on. To their absolute amazement, we dangled the key under their noses and off we all sped up the hill to the little cottage to have an unchaperoned look around. It was chucking it down with rain and almost dark but the little house welcomed us in. It was full of huge old French furniture and "brocante" but it felt wonderful to be there within what would soon be our own four walls. 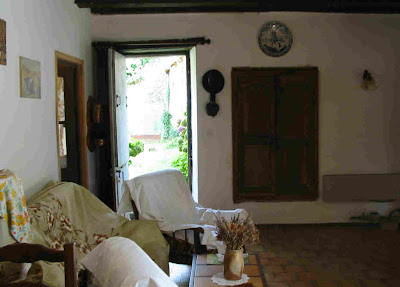 We skipped back down to the bar and celebrated with a few glasses of the PreHisto's best Vouvray. 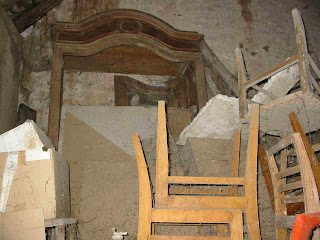 The next morning, as soon as it was polite to do so, we went back to the house to have a proper look round, armed with tape measure, notebook and camera. The sun was shining again. The one room downstairs had no windows, only three doors; the front door with an old fashioned shutter over it, the french doors to the terrace and the glazed door to the little kitchen extension on the side of the house.   There had been a large window in the room which was still there on the outside but was blocked up and plastered over inside. 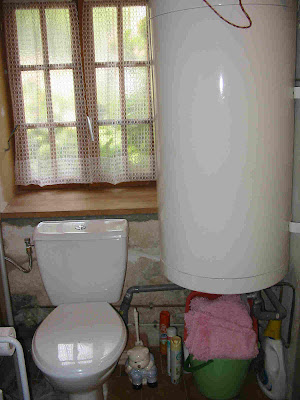 They agent had told us that Mme Beranger wanted to know if we would like to buy any of her furniture. He then told us not to offer anything for it as she would probably leave it all anyway!  We sincerely hoped she would NOT just leave it all.  Although some of it could no doubt be useful we didn't want to spend our first few holidays there sorting and disposing of stuff we didn't want. 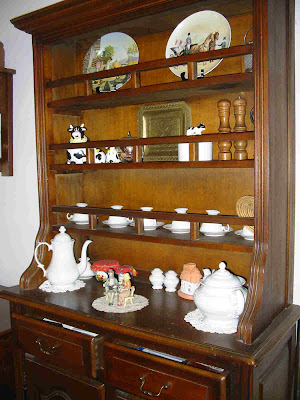 There was only one item in the whole house that I would have liked: a white china cake stand, shaped like a daisy. When I had mentioned this to Antony, he said "take it, you have bought it with the house". I was horrified - to me that would simply have been stealing. Daft, I know, but it's the way I was brought up - you don't take anything without asking first. 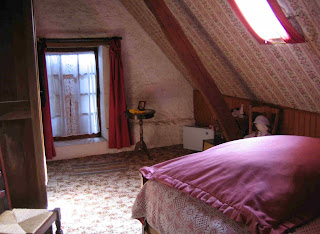 As we came away from the house, the neighbour asked us in to take a "petit thé ou café" with her. It was an interesting half hour as we used our best school French but we managed to tell her that we would be buying the house.
The next day, Friday, we handed the key back so that various surveys could be done. This is where things things really started to get serious. The process of buying a house in France is slightly different from in the UK and in many ways better, we thought. Once the deal is struck it is difficult for either party to back out. 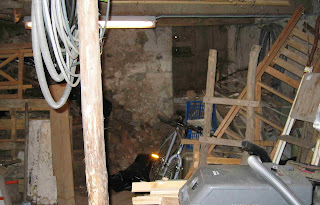