THE MOMENT HAS COME 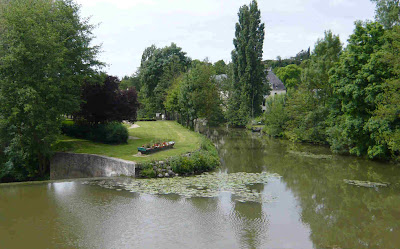 Down by the river at Abilly
Tuesday 21st August 2007 dawned bright and sunny but there were ominous grey clouds around. Armed with our new umbrella we went to Descartes to meet Antony the agent, our Angel Number One. He had organised three viewings for that day.
The first was at La Guerche, a charming little village not far from Le Grand Pressigny, with a medieval château but little in the way of commerces. As you go over the bridge into the village from Le G P, the house we looked at is on the left. You can't miss it. The bridge was built after the house and the road comes half way up the windows. 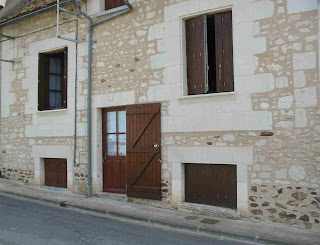 House number one at La Guerche
Not for us, that one then. Nearly two years later I believe it is still for sale.

The next house was at Abilly, another attractive little village with the river running alongside the road and a few commerces. We already liked Abilly.

The house was right at the top of our budget and was lovely.  There was a reasonable sized garden with a potager, rabbit hutches at the end of the garden and a spectacular view of some distant château. In the cellar, apart from the eau-de-vie still, there were neat rows of bottled fruit, preserves and wine on the shelves. 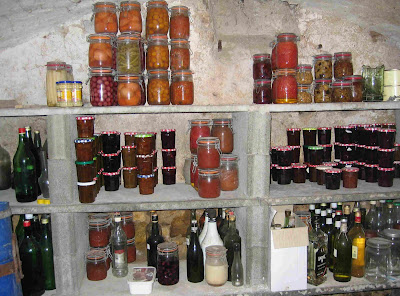 The store cupboard in the cellar at house number two

Outside, there were not one, or even two, but three cottages that came in with the house. All for "doing up". Antony hinted that there had been some discussion recently that the vendor might separate the sale of the main house from the dépendances but that might take some negotiation. For negotiation read aggravation, time and frustration, I thought. 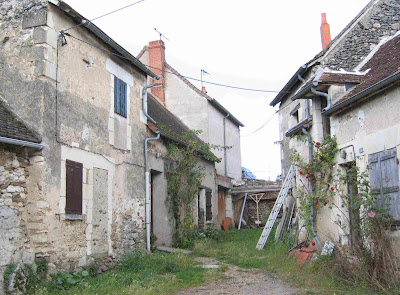 The three spare cottages that came with house number two.
Note the external access to the bedrooms - a ladder!

Not for us that one, either.

I can't remember where the third house was. I just remember that it was unattractive, with a huge garden and orchard, a hangar with a small forge in it. We then said to Antony that we would like to go back to Le Grand Pressigny for a second look at the little cottage there. I was trembling with excitement as we drove back to the village. We had seen nothing else that was anywhere near as good and I couldn't wait to see it again.

As soon as Antony unlocked the door and we stepped inside I felt absolutely sure this was the one. The rain clouds had drifted off and sunshine filled the one room downstairs. Standing on the little terrace, with the château just peeping over the top of the house and the view from the garden over the village rooftops I felt completely at home. 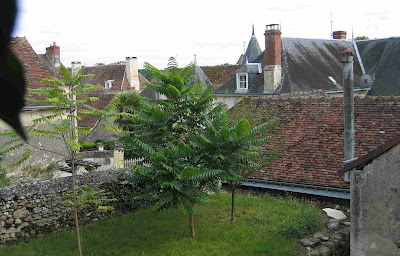 The view from the back of the house.

We announced to Antony that we would like to make an offer on the house, could he try to find out what the vendor might accept, as we could not afford the advertised price. Tomorrow was Wednesday and he promised to contact the vendor, who lived in Paris and get back to us as soon as possible. We had until the following Monday to sort this out as then we would be going home.

As we walked away from the cottage the neighbour was pottering about in the courtyard. Antony exchanged a few pleasantries with her and I grinned at her and said, "we are going to buy this house". I thought she looked very pleased.

more of the same Houses