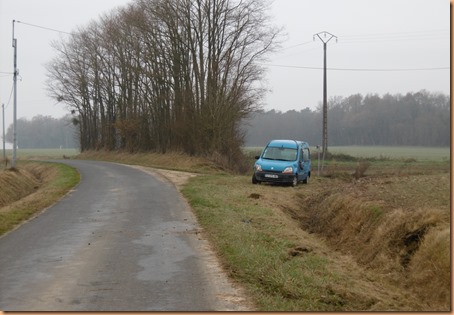 Living in the middle of a field can sometimes be interesting, especially when it’s deep in the French countryside and there is plenty of wildlife about.  The driver of the car in this picture had a very close encounter with a wild boar and a lucky escape.

This all happened the weekend before we set off back to the UK for Christmas.  It was after dark and as I was walking up the drive towards the car port I became aware of car headlights and voices just along the road from our gate.  There is very little traffic along our road but voices are not that unusual as passing neighbours sometimes stop their cars for a chat in the road.

As I pulled out of the drive I looked to my right and realised that one pair of car headlights was one above the other not side by side.  This could only mean one thing.  Something very wrong.

I reversed smartly back into the drive and fetched Nick and we both went to investigate.  The blue car was at that time on its side in the ditch, the driver was a middle aged lady who had been hauled out of it by a passing neighbour and his son.

It appears that she was driving past our house (in the opposite direction to the way the car was now facing) and as she rounded the slight bend a wild boar stepped into the road in front of her.  She braked and swerved, causing the car to hit the opposite side of the ditch and it then spun round and ended up on its side with the driver’s door underneath.  She was very lucky that the passing neighbour turned up only five minutes later.  From inside our house we had no idea that a crash had happened as we heard and saw nothing at all.  She could easily have been there for hours as apparently she was totally unable to get out of the car without help.

The lady was remarkably calm about it.  She was a bit battered and bruised but otherwise not seriously hurt, in spite of having had to be dragged over the seats and out of the back door of her car.  The neighbour had already called for the help of another neighbour who soon arrived with his tractor, hauled the car back onto its wheels and pushed it out of the way on the grass verge.  After that, the neighbours disappeared and we took the lady home to the other side of Le Grand-Pressigny in our car.  Her car was badly damaged and was towed away two days later.

We knew that wild boar were around near our house.  A visitor had seen a family of them in the field at the side early one morning in the summer and we had seen footprints for ourselves.  Nick had seen them a few kilometres further along the lane, sauntering across the road in front of him at dusk, although that was many months ago.  I found it fascinating that this one was crossing the road right by our house but that I had never, ever seen one myself.

Then, as we drove north through France three days later on our way to Calais, we encountered another one.  We were on a stretch of fairly busy normal road (not motorway) in broad daylight and one stepped out from the forest.  It was just behind the car in front and fairly close to us.  It trotted swiftly across the road and disappeared into the forest on the other side.  Luckily we were far enough away that we could brake calmly and were in no real danger of hitting it.  Otherwise, who knows, we might have ended up in the ditch ourselves.  When faced with the choice of hitting a 200 kilo lump of solid muscle or a soft grassy bank, would one’s instincts make the right choice?