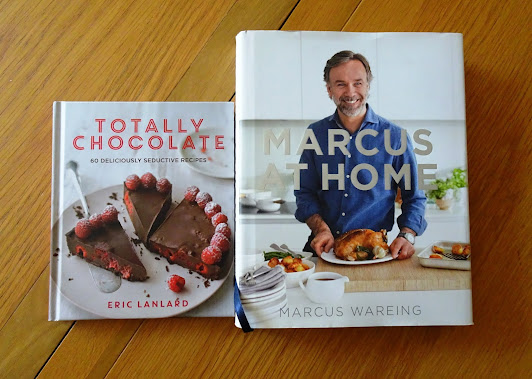 With the easing of the lockdown at the beginning of this week the charity shops re-opened.  I did a brief tour of our local ones yesterday and checked that they were accepting donations, which most of them were.  (There are five different ones in our nearest town.)

I took a small box of unwanted items to my favourite shop along with a large bag of plastic carrier bags, acquired during our early days of click and collect grocery shopping when the supermarkets were supplying goods ready packed in bags, presumably to limit the amount of time people spent picking up their groceries.  Charity shops are always very pleased to get carrier bags in my experience.

Me being me, as usual, the net flow of charity shop items was into the house not out of it, (more of that in the next post), two of the things I swooped on being these two cook books.  I have a large collection of cook books already but when they are only £1 or so each it's hard to resist a new one.  Both of these seemed to be completely brand new and unused.  Michelin starred chef Marcus Wareing is a judge on the professionals version of MasterChef and I had hung my nose over his book when it was first published a couple of years ago.  I managed to resist when it cost about £13 but when it was only £1.50 it seemed like a bargain too good to leave on the shelf. 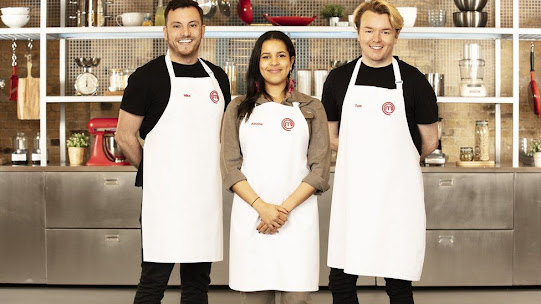 Which brings me to this year's MasterChef.
There was a bit of a hoo-ha when the broadcasting of the final of this year's amateur MasterChef competition was cancelled in favour of endless tributes to the late Duke of Edinburgh who died last week.  The poor man had been ill for some time which obviously gave all the TV channels plenty of time to prepare numerous tribute programmes including vast numbers of interviews with people who knew a lot about him and were prepared to record their memories and versions of events whilst he was still languishing in hospital then later in Windsor Castle.  I can't imagine being asked to speak in the past tense about the life of one of my friends while they are still with us but that's show business for you!  The MasterChef final was finally broadcast last night.
We gave up watching the competition during the early rounds (John Torode and Greg Wallace do get on my pip a bit) and had forgotten all about it but decided to catch up just for the last cook-off.  What a pleasant, talented lot this year's young finalists were.  I would happily eat at any restaurant they each cook in and in many ways I suspect it hardly matters which one wins as I'm sure that just getting to the final secures a bright future for anyone hoping for a career as a chef.
The food they cooked looked amazing and fabulous, considering that all of these people are literally amateurs, and the winner turned out to be Tom Rhodes, the young man on the right.  He currently works as assistant manager at Nando's Mexican style restaurant in Newcastle-upon-Tyne and seems like a really nice guy as well as an incredibly talented cook.
However, the thing that really tickled me was that during the section where viewers are treated to a little insight into their background and home life we saw a brief glimps of Tom's own cook book collection.  It looked like they were all arranged by colour !!  There he was browsing through one of his cook books in front of shelves where all the ones with pink covers were arranged together, next to the ones with blue covers and so on.  What a totally bonkers idea and I love it!  (Apparently Tom's ambition is to write a cook book himself.)
Mine are organised vaguely by author or type of cookery but they don't look anywhere near as appealing as having all the green, pink or yellow ones together!  I feel compelled to reorganise the whole lot rainbow fashion accordingly and I can't wait to make a start !!

more of the same Curious stuff, Food, Life in the UK