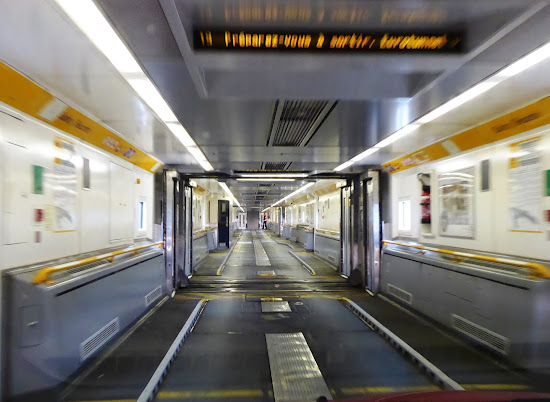 This is the view if you are first onto the train at Eurotunnel.

Well, all is in place but we are on tenterhooks.

The PM has put Spain and the Beleriacs on the green list but left France on the amber.  This means that the hordes of people desperate for a foreign holiday can now jet off to Spain, Majorca or Ibiza without having to quarantine on their way home - which was pretty impractical to do if all you have is a fortnight off work, not to mention the cost of all the PCR tests.  We pensioners are better placed as ten days at home on our return is more or less what we have got used to.

This is good news for us.  In the short term, France being on the amber list (with the quarantine, palaver and expense of testing on return) is diverting thousands of holidaymakers from France to elsewhere and might just mean that Macron keeps the border open.

With the Johnson variant running rife through the UK now (we might as well credit him with the Delta variant as his incompetence is why we got it), the leaders on the other side of the Channel Tunnel are getting twitchy about letting us in again.  If they get too twitchy the best we could hope for is that they might insist on a quarantine period as well as the vaccination record and Covid tests.  The worst case is that they close the borders to travellers from the UK but the prospect of fewer Brits travelling to or through France might calm things down.  Putting France on the green list some time in September would be handy, so that we wouldn't have to fork out for all those tests and quarantine on our return.

For now, not knowing if we'll be able to go when we planned is just too much.

At a push we could make a run for it while we can, as long as we could rearrange the Covid tests and the AHC appointment for Hugo at a suitable time, both of which could be tricky.  There might be a run on Eurotunnel bookings as everyone else does the same but we'll take any crossing at all.  Anything.  Anything not to spend the next two weeks worrying about whether things will change.  We just want to get there and get all this stuff behind us for a while.

more of the same Brexit, Life in the UK, The virus., Travel