GETTING ON WITH IT

When the cottage was built, possibly around 1700, it was probably just a one room dwelling with a loft space. It has obviously been through several incarnations and renovations, the discovery of which will keep us mystified for years.
.
At some stage, possibly in the 1950's or 60's an extension was built on the end of the house to form a kitchen and toilet. (Our neighbour, Mme André, has told us that 1955 is the year that mains water arrived - prior to that the water would have come from the well in our garden, for us and our neighbours.) In possibly the 1980's this was remodelled into just a fitted kitchen. We know this as we have seen that the same kitchen units are still available in the Lapeyre catalogue in their traditional collection. We think that at about the same time a shower room was formed from part of the room downstairs, the tuffeau fireplace was fitted, a staircase was put in and the upper space was boarded out to form two bedrooms - a major modernisation of the building.
.
. 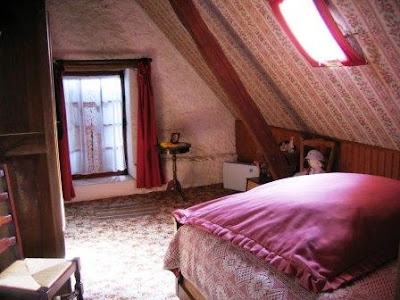 The main bedroom when we first saw the house.
.
When we saw the cottage in August 2007 it was crammed with huge old French furniture, of no particular style, just the sort of stuff that someone would relegate to an infrequently used "maison secondaire". Downstairs was not too bad but upstairs was definitely the poor relation.
.
The bedroom with the larger window was to be the master bedroom but it was on the side of the house that needed a new roof. With that would come a new Velux window to replace the scruffy little skylight with the broken catch. We preferred that room as it was much lighter due to the large window, but this didn't fit properly and the sill height was dangerous. It was important to be very careful when opening or closing the shutter as it would be easy to fall out onto the terrace if you leaned just a little too far....
.
.
In 2008 we did nothing to the bedroom except tidy it occasionally so that summer visitors could sleep in it. We used the other, smaller bedroom for ouselves as it was less draughty in autumn and winter. 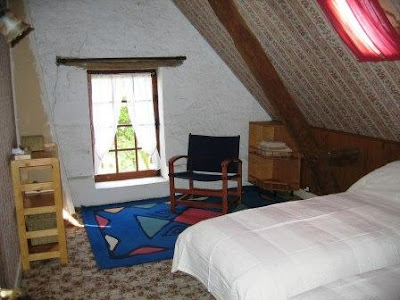 The bedroom, tidied up a bit to make it useable by our first visitors.
.
.
In September 2008 the essential half of a roof arrived. Without being asked, the roofers also boarded over the broken plasterboarding with the pink flowery wallpaper when they fitted the new Velux window, leaving a lovely new wall for us. Very nice of them - but it was probably just the easiest way for them to tackle their job.
.
.
Over the winter 2008/09, Alex and Nicole fitted us a new double-glazed window to replace the broken one and also removed the ghastly shag-pile carpet and built a beautiful wooden floor on top of the underlying concrete. Nicole completed the work by staining the floor. It looked gorgeous and almost as if it could have been there forever.
.
. 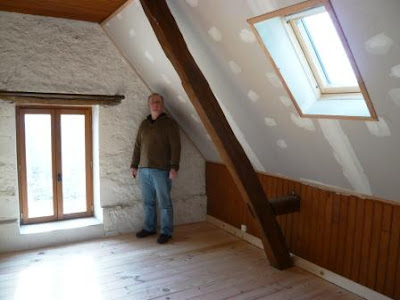 Alex demolished the partition at the end of the bedroom, revealing the lovely beams in the old wall and also repositioned the door thereby making the room a couple of feet longer. He also put new boarding over the other wall and the rest of the pink wallpaper. That was going to be a lot easier for us than trying to remove the paper and make good the surface underneath. 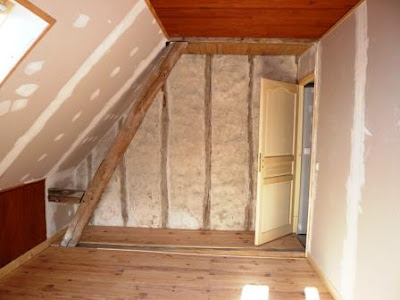 Alex also fitted a new safety grille to the window, making the use of the shutters much safer. 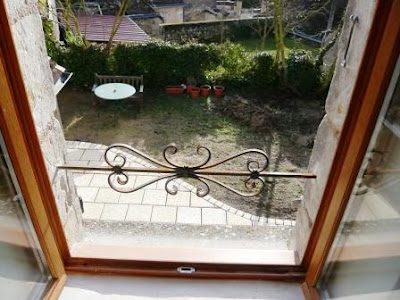 New grille in place - much safer and attractive, too. 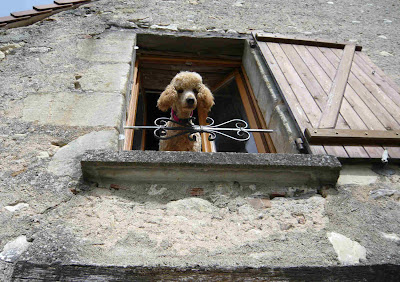 As demonstrated by Lulu.

.For most of 2009 we did very little to the bedroom except occasionally tidy it up for visitors. We were simply having too much fun just enjoying the place on holiday and lots of the DIY jobs that we were so keen to tackle early on were by now in danger of never getting done - we had simply stopped noticing them ! 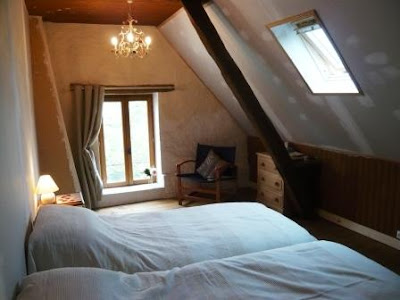 The bedroom temporarily pressed into service again for more visitors in May 2009.

In October we decided we just must finish something so we made an effort to get on with decorating the bedroom. The idea was that we would finish the larger bedroom and move into it as our room. Then at some stage we would do the same with the other bedroom, which would become the guest room.

.It turned out to be a bigger job than we thought. The painting of the older walls was very time-consuming because on some of the surfaces, we had to effectively scrub the paint into the walls. The new plasterboard needed two coats of paint and a lot of sanding to disguise the joins. The beams needed scrubbing to remove years of old cobwebs and splatterings of paint left from the last (and probably only) time the room was decorated.

.The ceiling had been boarded over at some stage with a kind of wood panelling that we had seen in lots of other houses. We debated whether to remove it and put nice new plasterboard up but that seemed like another big job so we decided just to paint it. That took ages and required three coats.

By the time we arrived last Boxing Day we had done most of the preparation work and were ready to finish the job. Nick did most of it, facilitated by my regular supply of food and drink. I helped to paint the beams, the walls and the woodwork. The final job was to paint the new floor with a non-slip varnish that gave it a lovely soft sheen but safe surface to walk on. 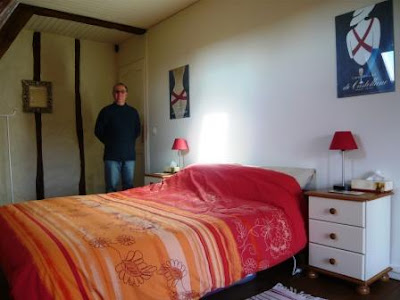 . I also supervised the replacing of the furniture and the other finishing touches. We're very pleased with it. 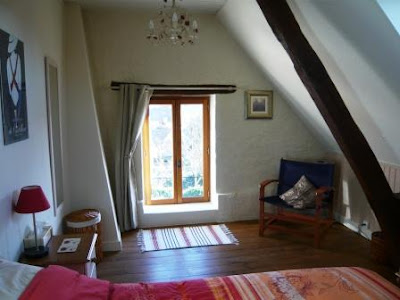 Light, comfortable and airy, just as we wanted.

more of the same DIY, Travaux