A LESSON IN FRENCH

CRABTREE RIDES AGAIN!
One of our favourite TV programmes from years gone by is "Allo Allo" which ran for 10 years between 1982 and 92. So much so that we have bought the whole series on DVD and when we need cheering up on a grim winter's evening we put it on and have a good laugh. It never fails.
.
For those that are not familiar with the programme, Officer Crabtree was the idiot Englishman who believed he could speak French, masquerading as a French police officer. 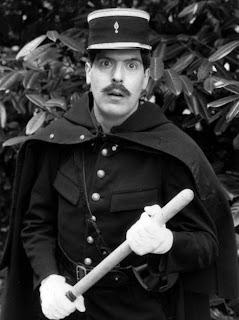 Nick has become an expert at what we have called "the Crabtree".
.
I will explain : our French teacher once told us that the English and French languages are often very similar so if you don't know the word in French try saying the English word instead but with a French accent. Nick has become this theory's greatest fan.
.
One of his classics occurred that first Christmas week in Le Grand-Pressigny in trying to buy a cabbage on the market. He couldn't remember the French word for cabbage so he took our teacher's advice and said "un cabbarge s'il vous plait", emphasising the arge to make it sound as French as possible. The stallholder immediately knew what he meant and without a hint of amusement or bewilderment reached over and handed us a cabbage.
.
This is surprising since the real French word for cabbage sounds nothing like cabbarge - it's chou.
.

During the same week he performed another version of the Crabtree - "saying the wrong word".
.
We were in the PreHisto one afternoon, taking a break from the DIY and the landlady was enquiring how well we had settled in. It had been bitterly cold and she asked if we had any heating. (We think that's what she asked, anyway.)
.
We were very pleased with our beautiful new wood-burning stove, the poêle, so Nick proudly announced that yes, we had a new "poulet" which was heating the whole house !!
.
She and several of the people at the bar burst into laughter and it took us a while to realise his mistake.  He had informed everyone in the bar that we were heating our house with a new chicken !!
.
.
(Photos from a Google source, not by me.)
.

more of the same French language