When we bought the house in 2007, at the back there was what can only be described as a large pile. We were not at all sure what was in it - it seemed to be overgrown stone, "silex" and general junk. It took up a huge area and we wanted the space for ourselves. The only way to find out what was underneath was to start digging.
. 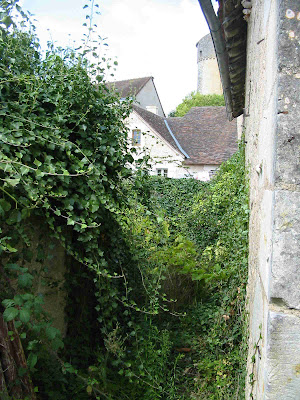 We didn't fancy doing that ourselves .... but we knew someone who would, our friends Alex and Nicole. 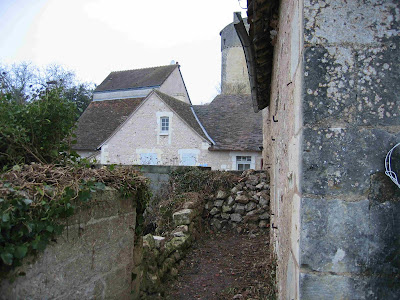 On that side of the house there was a wall separating us from our neighbour down the hill. Most of it had fallen down and Mme André had alarmed us with stories of someone climbing over and prowling around the property.  In any case, when we were deciding on how to spend our budget for alterations, rebuilding the wall was a priority. So we hired Alex. He's good with walls. 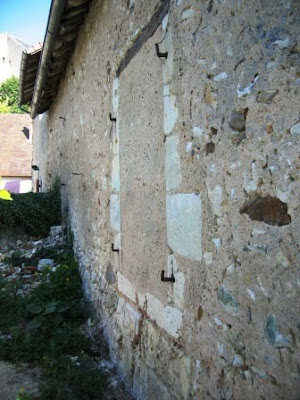 There was also the case of the missing window. On the inside of the house there was nothing, just a smooth (!!) wall but on the outside was a window, complete with lintel and hooks for the shutters. Re-instating the window would be a big and messy job but it was a also a priority. Alex tackled the wall early in 2008. We instantly felt much more comfortable knowing there could be no unwanted nosey prowlers. Re-instating the window required planning permission, which Barrie organised for us. It was tacked onto the application for permission for the new half of a roof and the new velux window on that side. There was some uncertainty that we would get permission for the old window to be re-done because of its proximity to the boundary between us and our neighbour. Luckily it was granted. In winter 2008-09 Alex engaged and worked alongside a local mason to put the window in. 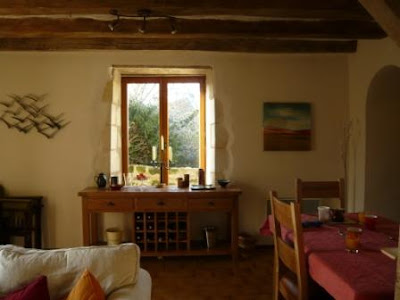 Having the new/old window made a huge difference to the house. Previously the one room downstairs could feel very dark. The window seemed much larger inside than outside and we are absolutely thrilled with it. It lets in so much light and faces west, giving us the evening sunshine.

Alex also made us some new shutters for the window and finished it off with those cute little people shutter fasteners. 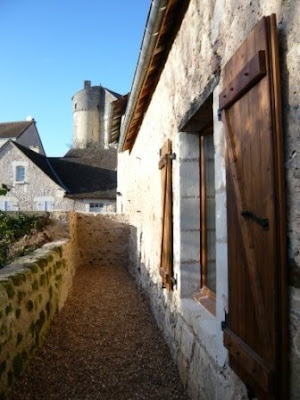 Finally, in our last absence of ten weeks between October and Boxing Day, Alex and Nicole removed the pile. It was tons of overgrown rubble, probably the spoil from the demolition of a small building, although we had no idea where it had been.We couldn't wait to see how it looked. It was superb. 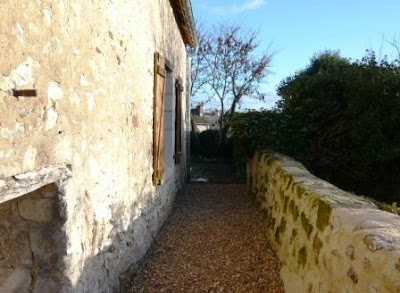 Now we have a fabulous clean and useable space.

As well as getting a huge amount of extra space (huge relative to the size of our tiny cottage that is), we gained another window. As the pile was gradually removed another window emerged. You can see it in bottom left of the picture above. On the inside it is hidden by the structure that forms the staircase. Maybe one day we will do something imaginative with that, too.

more of the same Travaux