We left Le Grand-Pressigny on New Year's Day in 2008 feeling rather pleased with ourselves. We had achieved a lot already but it was going to be a long stretch until our next visit at Easter. We had had a great time getting to know the place but we had an enormous list of things we wanted to do and things we needed to buy.
Furniture for a start. 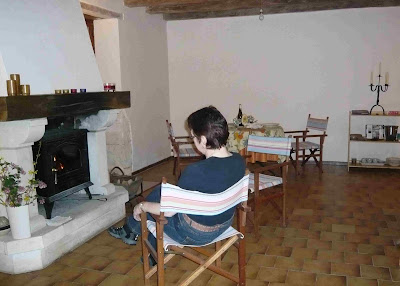 Contemplating the need for furniture.

We had looked in some of the places people had suggested to go for furniture but so far we had drawn a blank.  We had found nothing at the right price (considering this is a holiday cottage, used for just a few weeks per year, and not a permanent home) and the nearest Ikea was in Paris!
Sale rooms and the vide greniers had been suggested but relying on being in the right place at the right time to find just the right furniture seemed to be unlikely. They would be fun to look around for all those important extra bits and pieces later. We were beginning to think that at this rate, we could end up spending a large part of each holiday looking around furniture shops.
Back in England, we put the problem on the back-burner for a while and then, one day in January Nick was passing our local furniture shop in Derbyshire and spotted a display of really nice stuff in the window. And they had a sale on - 25% off all of it. We went in for a look and fell in love with it. It was made from reclaimed oak, was supplied by a company in the next county, and yet looked for all the world like some of the lovely French country furniture we had seen in Tours.  It would be just right.
We talked about it for a long time, mainly because to buy things in England was not what we had planned. We fully intended to get everything in France. Buying it at home and then getting it over there seemed like hard work, but in the end that's what we did.
We placed our order and the store agreed to keep it all in their warehouse until we were ready to transport it across to France. We also bought two small Ikea sofas and stored them in our garage at home.  We wanted to get the decorating done downstairs first as that would be much more sensible than trying to paint round a whole load of brand new furniture. 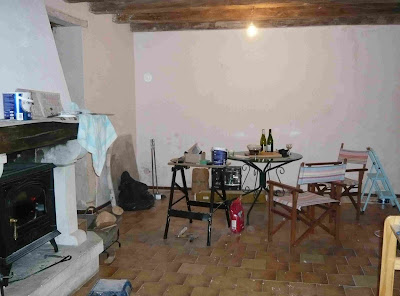 Work in progress at Easter.
Easter then, was spent doing up the one room downstairs - the living room. In a short 5-day break we got the walls, beams and ceiling prepared and painted. We also got everything cleared up and cleaned ready to put the furniture in. It was hard slog.

Cleaning the old paint off the beams and painting the ceiling inbetween them took hours of hard and dirty work.

Less than two weeks later, we came back with the biggest transit van we could hire on our normal driving licenses.  We loaded up the furniture and took the opportunity to fill the remaining space with all kinds of things that we would not be able to fit into the car, including our old garden bench which we thought would get a lot more use in France than it did in our garden in chilly Derbyshire. There was also a shower cubicle and tray for the bathroom, which was to be the next DIY project, and a spare lawnmower.

We set off Friday lunchtime, sitting very upright in the uncomfortable van and taking it in turns to drive. We stayed overnight in Rouen and en route we called at the bed shop in Tours. Somehow we managed to squeeze two single beds and mattresses for the second bedroom into the van. By now it was bursting at the seams! 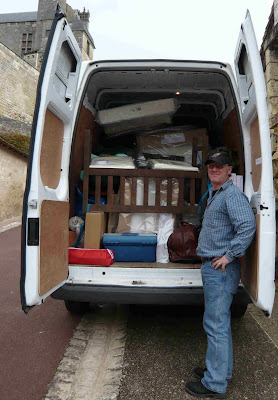 There was not much space left in the van.

At the other end, Alex and Nicole, Barrie and Lucie helped us get it all off the van and into the house. Just a few hours later, it was all positioned, polished and looking just perfect. At 8pm we were enjoying a very welcome meal in the hotel in the village before turning in early, exhausted. 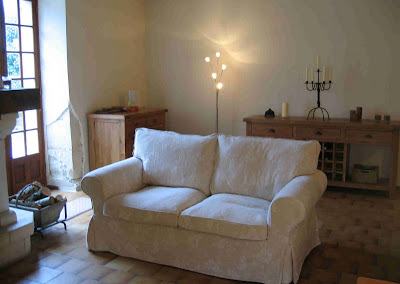 All in place and perfectly polished.

Mme André was somewhat bemused by the whole thing. We turned up with a van, stayed one night and then left again !! The drive home was long and hard and to our absolute dismay, we hit snow, literally, in Northern France, even though it was 6th April - that wasn't supposed to happen ! Driving a large and completely empty transit in snow was not a happy experience. We passed a couple of nasty accidents on the motorway, one involving a horse box, although the horse was standing by the overturned box and seemed to be OK. These slowed us up and we missed our ferry, having to join the long queue for another one. 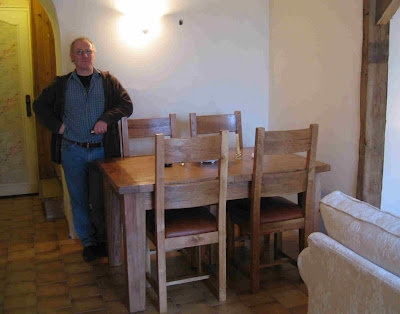 Not a speck of dust to be seen !

The whole weekend had been quite an adventure but I wouldn't wish to repeat it in a hurry. Huge transits are horrible to drive. They are slow and hard work and very uncomfortable and doing all those miles and then back again in just 2½ days was exhausting. But it was worth it just the once. 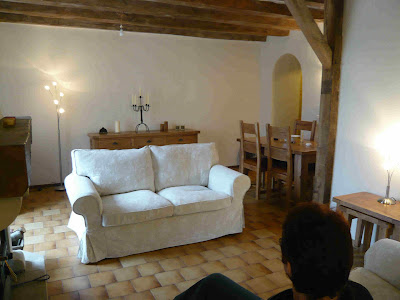 The little cottage "au pied du château" was beginning to look like home.

more of the same DIY, Furniture