When we arrived in Le Grand-Pressigny last August for two weeks' holiday, we were really ready for some rest and relaxation. We were determined to take it easy and not try to cram too much in.
On arrival at the house we found a note left on the table by Nicole said "Comice, Montresor, parade 3pm". That was it, all resolutions went out of the window and off we dashed.  So much for taking it easy. By the time we got there the afternoon had turned very sunny warm and we were definitely overdressed in our thick jeans and t-shirts. We were there in good time to see the parade and there was already a good crowd of people.

The Comice Agricole is a sort of fete that celebrates the local agricultural community. There are usually stalls selling food, crafts and local produce, a display of farm animals and of course, the parade. Last year it was in Descartes and the weather was so hot that we got to see the stalls and chickens but chickened out of watching the parade. There are some photos of it here. This year we did the opposite. We saw the parade but, still tired from our marathon of a journey the day before, went home after that to get into cooler and lighter clothes and put our feet up.
At the front of the parade was a band.
Then came the floats. This one was pulled by a rather fine ox.
Lulu barked at it.  I expect it was really scared !!

Then came the tractors pulling the other floats. There is usually one from each village that takes part in the Comice. There are, I believe, 12 villages that take part and the event moves around from one to another with each year. I noticed that for some reason there was no float from Le Grand-Pressigny this year.
I wonder how the rufty-tufty farmers felt, driving along in floats decorated with flowers and suchlike.
All the children taking part seemed to be really enjoying themselves.
These ladies were having a good time, too. I bet they were hot in those costumes.
I had seen this jumper before, on the same gentleman, back in July!
Amélie and Isabella were there with their parents. They looked very chic in their new outfits, recently acquired on a trip to England.

This canine member of the crowd was really well behaved.
We suggested to Lulu that she should watch carefully to see how it's done!

Montresor is such a lovely place. We never tire of going there.

We have been in France on 14th July many times before and seen all sorts of things going on. There were often street parties, fireworks, special meals in the restaurants, huge barbecues and so on. So we were really looking forward to the celebrations in our village. 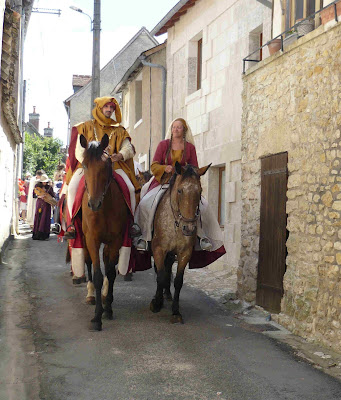 In the morning Nick finished the DIY in the kitchen - fitting a proper worktop either side of the cooker - and with that out of the way we decided to have a run out. We went to one of our favourite places, Anlges-sur-Anglin. 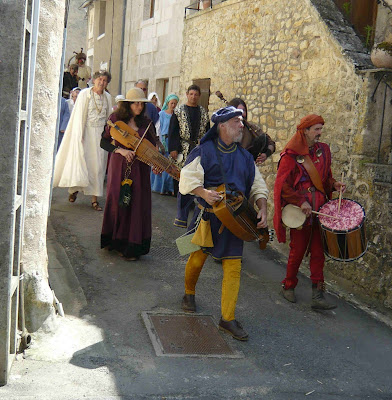 It was a bit crowded but we treated ourselves to an ice cream and ambled up to the old town. There was a general air of excitement and expectation about the place and we assumed it was because everywhere people were getting things ready for the big village party that evening. But we were wrong. We stumbled across a medieval market and a procession taking place. 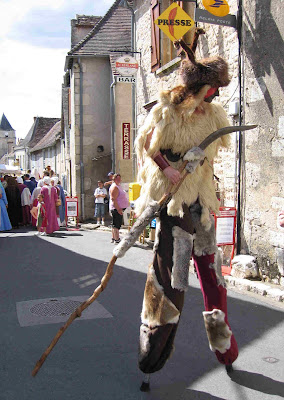 There were musicians, jesters and clowns, also people on stilts. (I wonder if they really used those in medieval times.) A few people were dressed to represent how unpleasant and unwashed the average person might have been in those days. There was an ugly old crone tormenting children with a half-eaten apple that quite clearly had a (plastic) worm sticking out of it. The costumes were great and I admired those taking part because it can't have been too comfortable under all that clothing on such a warm day. 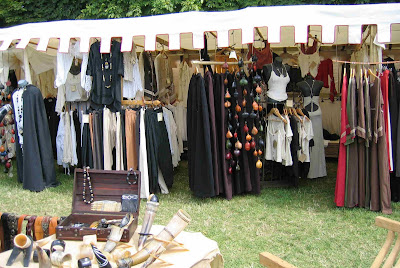 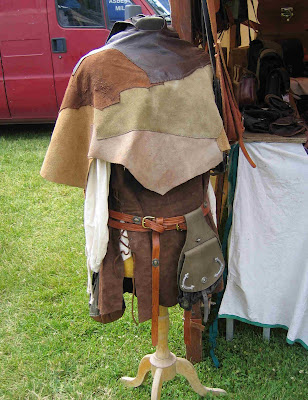 The market itself was fascinating, with lots of people browsing and enjoying the ambience. I couldn't say how good sales of medieval clothing were on such a hot day, but we did buy some lovely herbs and a very useful mortar and pestle from one stall holder. 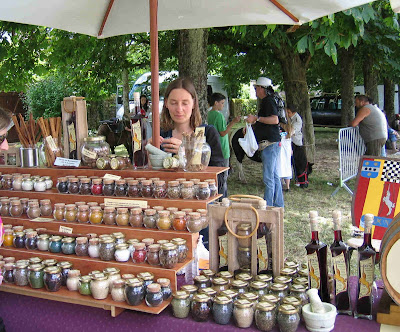 We had a lovely afternoon but the best was yet to come. Back in Le Grand-Pressigny preparations were well under way for the 14th July street party. We had bought tickets for the "moules et frites" event being hosted by the PreHisto. Tables were put out on the pavement and a dance floor and stage were being erected in the square opposite. 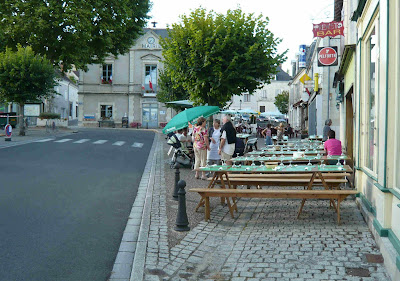 People started gathering in the square for apéros and gradually the tables filled up and the whole place was buzzing. It was a beautiful warm evening. The crew at the PreHisto did a fantastic job of getting the three course meal out hot and fresh to everyone. Not all at the same time of course, but who could complain about waiting when we were having such a good time ? 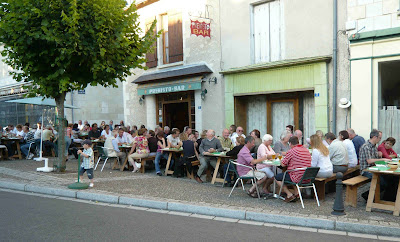 After dinner the band started playing and we had lively dancing to an eclectic mix of music in typical French style. All age groups joined in and would be on the dance floor together. It was marvellous. We certainly don't get anything like this at home in England. Even if the weather was good enough, persuading anyone to do anything outdoors like this where we live would be a complete non-starter. Teenagers would NEVER be seen within a mile of a dancefloor that had "OLD PEOPLE" (like us) on it, not to mention toddlers. You might manage it at a private wedding but in public - not on your life !

Much later, when we had all had an evening "bien arrosé", and worked off some of the frites on the dance floor, we all wandered down to the river to see the fireworks. By which I mean everyone, the whole village. Or at least it seemed like it. I was surprised to overhear one or two grumbles about how poor the fireworks were compared to previous years. To me they were fantastic. We oohed and aahed to our heart's content. Our only equivalent to this in England is on 5th November and for that you nearly always have to brave freezing rain and mud. And eat soggy hotdogs. Here we had had delicious moules and frites followed by lively dancing AND FIREWORKS. What more could anyone want ?

For the umpteenth time that holiday we wandered up the hill to our little cottage very happy indeed. We sat on our little terrace in the past-midnight warmth and listened to the last of the music and the happy chatter going on down in the village square. How lucky we were to have found this place. You can keep your swimming pools and fancy verandas, your acres of land, vineyards and orchards. With our tiny terrace overlooking the village, our scary plumbing and dodgy wiring, our scruffy bedrooms and crumbling paintwork, being in the thick of it all and knowing that fresh croissants were only a few steps away in the morning, we had the overwhelming feeling that it doesn't get much better than this.