During my brother’s stay we had to make a trip to Ikea in Tours to be able to progress some of the kitchen work.  (More bits were needed for the worktop lighting.)  So we suggested that we all go, have lunch, leave him in the city centre to explore while we did our shopping, then regroup for a beer before going home.  It worked perfectly and gave us the excuse to go to one of our favourite lunchtime restaurants. 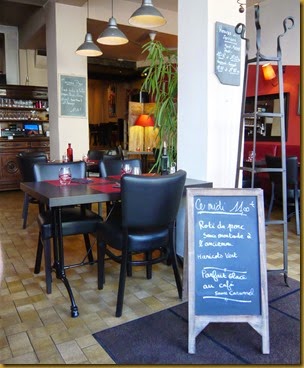 It’s called “Il Mostro”, in Place du Grand Marché.  I don’t have a picture of the front of it but it’s almost directly opposite this statue: 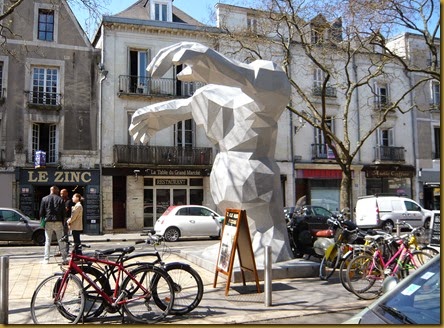 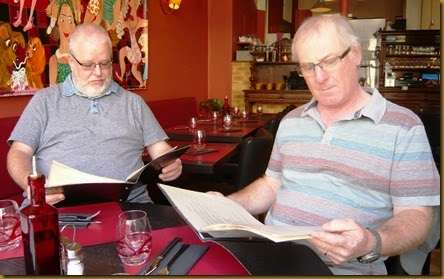 There was much studying of the menu but I knew already what I wanted to eat – exactly the same as on our two previous visits – turkey risotto followed by tiramisu.  The menu du jour looked good and most other people seemed to be ordering it – but I had set my heart on the risotto! 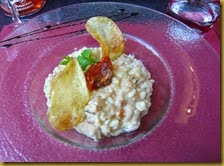 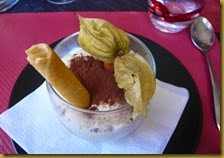 Definitely the most delicious and creamy risotto ever!

My brother had a nice pizza followed by a salted caramel parfait. 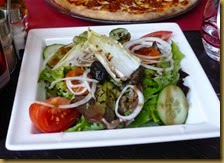 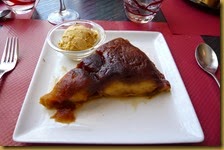 Nick had the same as me, followed by tarte tatin, and we all shared a nice side salad.

We operated our usual “arrive by 12.15pm” policy and were the first to sit down indoors.  It was a warm, sunny day (thanks, dear brother!) but we sat indoors because a lot of the outdoors tables were already occupied.

By 12.30 the staff were declaring the “terrace” – the dozen or so of their tables on the pavement - “complète” and prospective diners were heading elsewhere for an outdoor table.  I don’t blame them for wanting to make the most of the sunshine, but by not coming indoors they were missing out on a jolly good lunch!

After our shopping trip to Ikea we met up in Place Plumereau, the beautiful square in the middle of old Tours and after a beer headed back to the car.  On the way I rediscovered my old love of old doors (and windows and other curious architectural features). 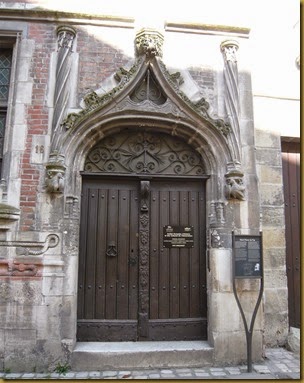 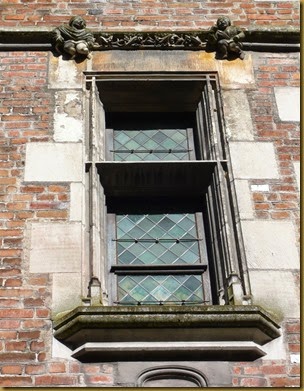 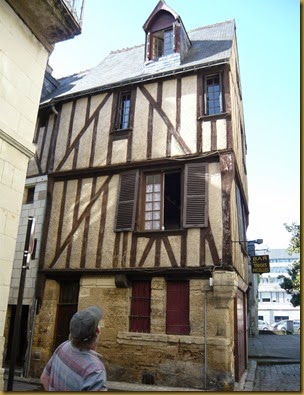 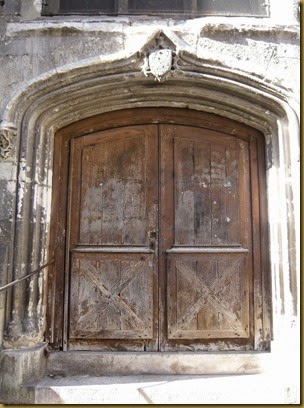 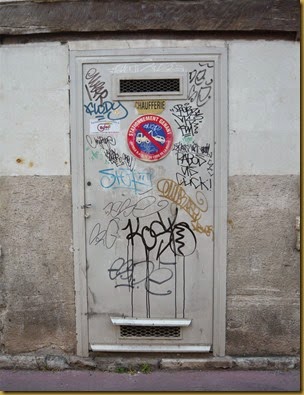 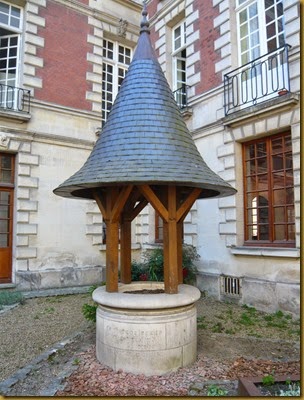 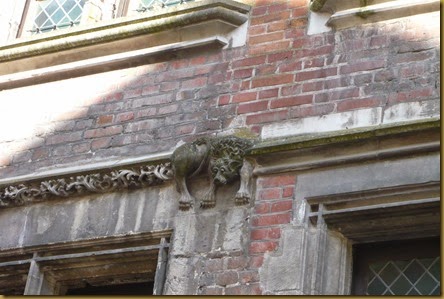 There’s something about doors and windows that fascinates me.  I take every opportunity to sneak a look inside – hoping for a peep at their furniture or maybe a table set for lunch – a glimpse into the lives of the occupants.  It’s an endless source of entertainment, especially in France where the outside of a building can be totally misleading in terms of what to expect on the inside.  Depressingly squalid living rooms can often be found behind lavish stone exteriors, yet chic and modern kitchens can be found in crumbling and dilapidated old buildings.  You never know what you will find behind closed doors!

DESCARTES AND A LEAKY ROOF

In April my brother came to stay with us for a short holiday.  For nearly all of the nine days he was with us the weather was glorious. 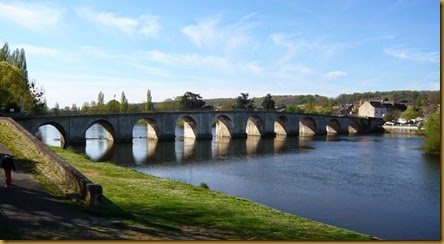 I’m sure many of you will recall the beautiful blue skies and sunshine we had in the middle of April - and temperatures pushing 30°C at times.  It started the day before he arrived and ended the day after he went home.  In fact that weekend after he left it chucked it down and we had nearly 3” of rain over three days.  Awful.

So awful that we awoke on the Saturday morning to that ominous sound of drip, drip, drip.  Sure enough, the leak in the roof that we had suspected was there was now very much apparent.  Water was getting in around the chimney stack, running down the exposed stonework, along the beam and dripping out of the beam further along – onto the bedroom floor!

We sent an email to the carpenter (the young man who is making our new staircase and has cut our kitchen worktops) and that very morning he arrived in his van, went up onto the roof and bunged up the substantial gap between the ridge tiles and the chimney stack with sealer to prevent the water coming in – as a temporary fix pending a devis for a permanent repair to the roof.  We were very grateful.  Although that night we relocated to the guest room just in case – the anticipation of the sound of water dripping onto the bedroom floor is not conducive to carefree slumber! 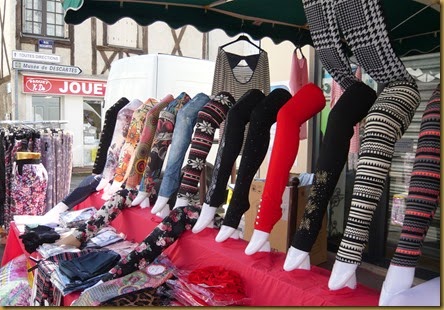 Going back to the fine weather and my brother’s visit, we decided that all work on the kitchen and garden would come to a halt for the duration of his stay and along with him we would have a bit of a holiday.

One of the places we went for a relaxing mosey round was to Descartes for the Sunday morning market. 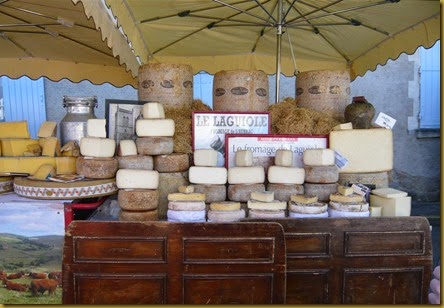 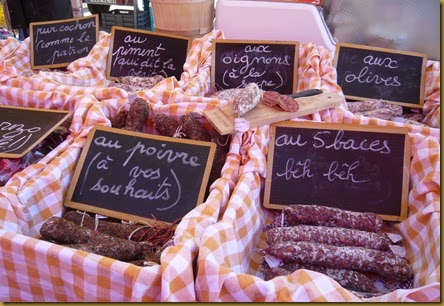 We tend to take the markets a bit for granted nowadays.  After all, we can go there any week, to several locations, so, much as we enjoy them it’s not as much of a thrill as it used to be.  Which doesn’t mean we no longer appreciate them, far from it, but the sense of wonder has gone a bit.  It was therefore lovely to see it again as if through my brother’s eyes and to see how much of a novelty it was for him as he pointed out the things we no longer seem to notice – because they’re always there.  How lucky we are. 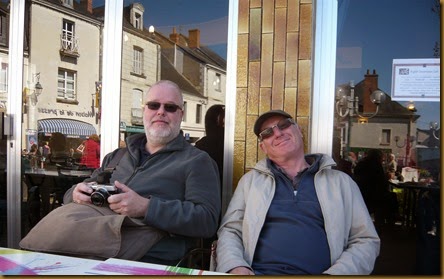 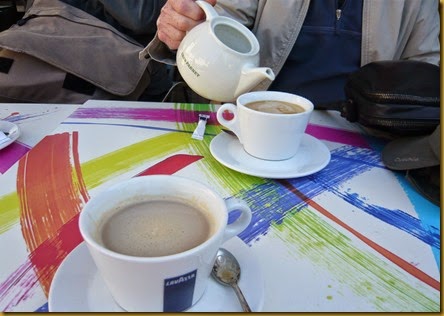 After our amble around the market we decided to stop for a coffee – something else that we don’t do often enough.  The café was bustling and the waitress very busy.  When our coffee arrived we thought she had made a mistake as she brought a teapot with it – but no, it contained the hot milk! 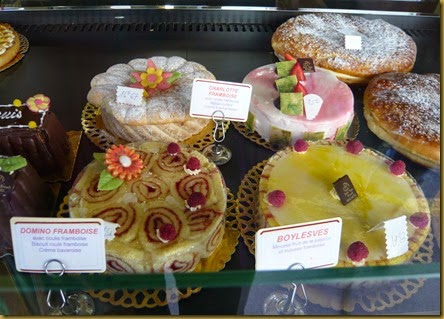 After coffee we headed for the park, passing the patisserie on the way.  We rarely buy cakes and pastries these days but I’m pleased to say that having a visitor gave us the excuse to put that right! 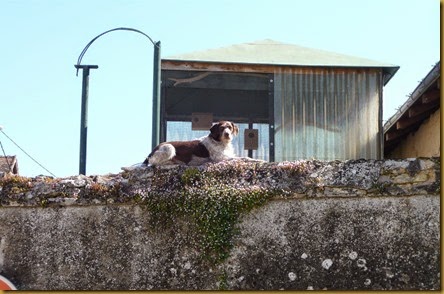 My brother has stayed in our previous little house in the village three times before, bringing his teenage daughter with him for a summer holiday.  It seems they have always had good weather and only one day of rain in all that time.  How lucky they were!  If he always has that effect on the weather he can come again as often as he likes! 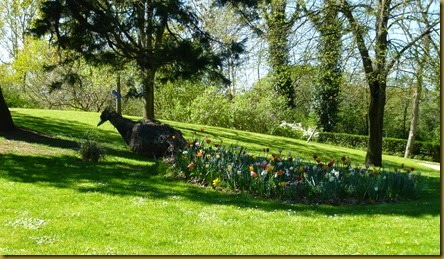 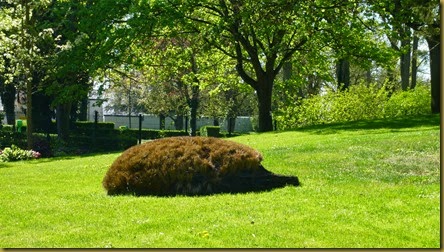 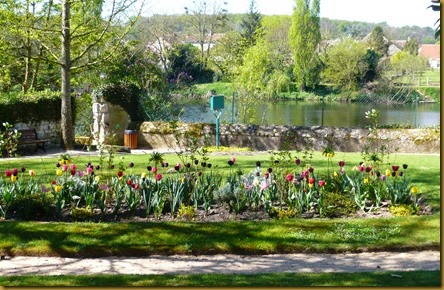 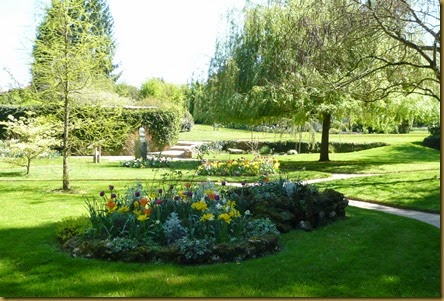 We love the park at Descartes and have walked around it many, many times.  There is rarely anyone else there.  In fact it’s unusual if we see more than one or two other people.  It’s peaceful, beautifully planted and well tended, a joy to walk around.  On this occasion we were just slightly too late to see the tulips at their best but it was still full of colour. 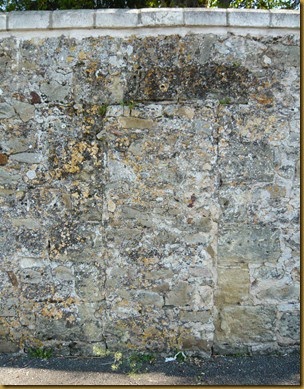 On the way back to the car I spotted something else I hadn’t noticed before.  It just shows how much difference it makes to be ambling along aimlessly instead of rushing somewhere.  I must have walked past this ghost door dozens of times before and never seen it.  Now I shall have to go back to see if I can work out why it was there!