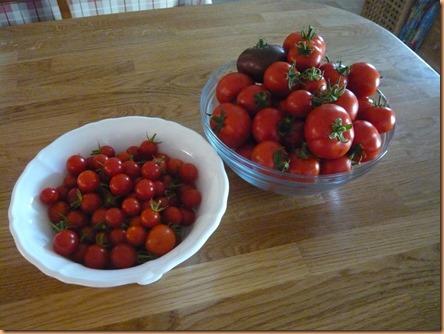 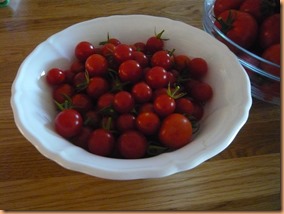 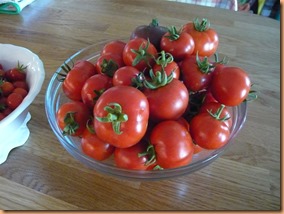 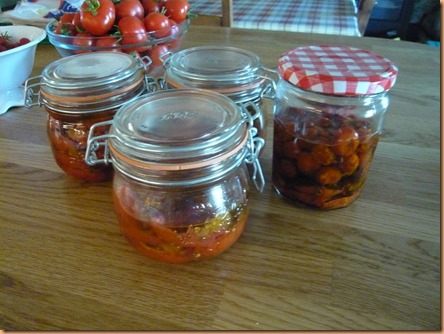 ROOF TERRACE, GATES AND A PROMISE

Time has whizzed by.  I am slightly dismayed by my own lack of blog posts.  Constantly playing catch-up and posting old news is not what I thought I would be doing at this stage of my life, now that we are more or less settled in our new home in France.  I could claim to have been so busy that I haven’t had the time, but in the past, before I retired, I had less time but still managed to post more often.  Ah well, they always say, if you want something doing, ask a busy person. 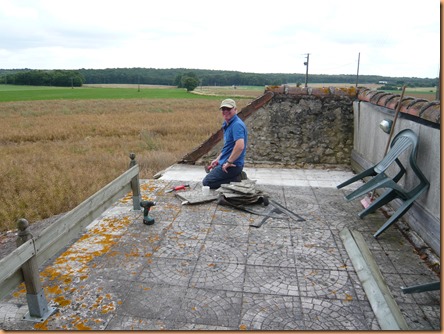 One of the things that has risen to the top of our to-do list, once the weather dried up, was to rebuild the “roof terrace”.

The very term roof terrace implies something more sophisticated than it really is!  Basically it’s the flat roof over the well barn and its existence has puzzled us from the beginning, although it’s nice to sit in an elevated position and enjoy the view over the fields at the back of the house from time to time.  We don’t have any other way of seeing this view as there are no windows in the back wall of the house, except for three Velux windows in the roof, none of which are in a position that you can gaze out from without getting a sore neck after two minutes. 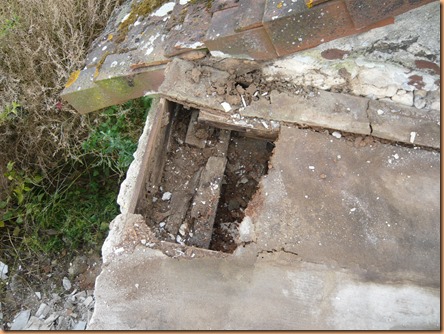 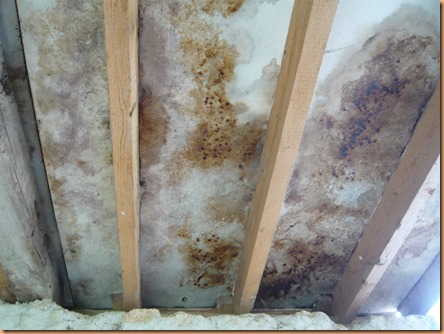 The problem is that it leaks.  The two layers of tiles, one on top of the other, sit on chipboard flooring panels and these have mostly rotted because water seeps through.  We could just leave it to rot away completely and not use the “terrace” but having something that is potentially unsafe and a no-go area on the property is not our style.  And the barn beneath would be a good storage area once it’s dry, so we decided to bite the bullet and get on with it. 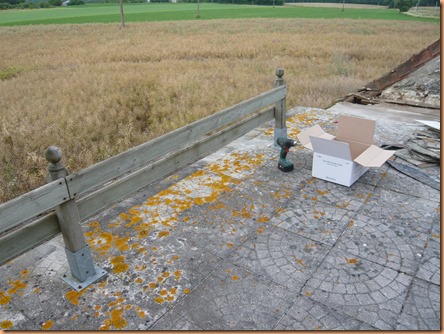 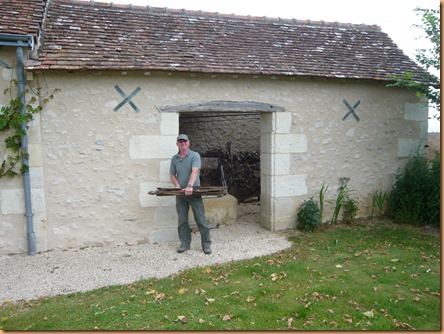 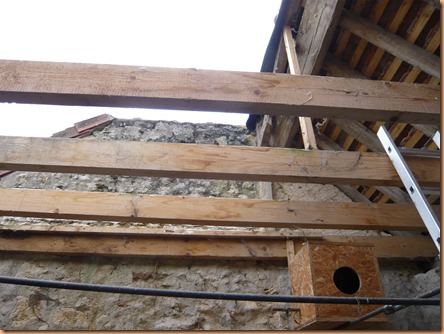 To access the “roof terrace” you have to climb out of the bedroom window!  Nick first removed the low railing, which was presumably meant to prevent you from falling off the edge, then the two layers of tiles.  Then he had to cut up the floor panels to make them small enough to be carried, along with all the other waste, out of the house via the bedroom window, the bedroom, staircase and kitchen.  This is because the farmer’s land goes right up to the back and side walls of the house and there was no way to lower stuff down and remove it any easier. 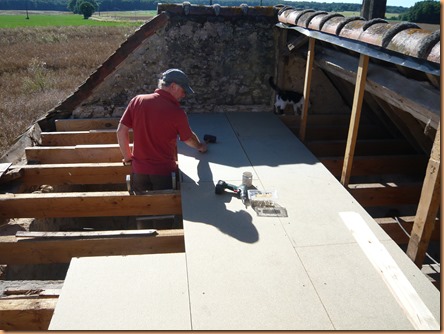 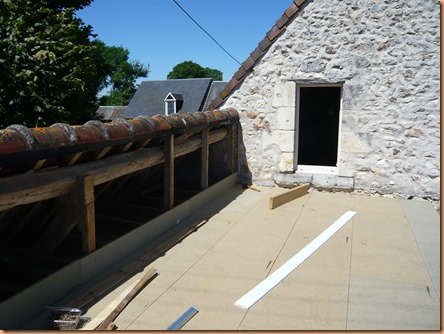 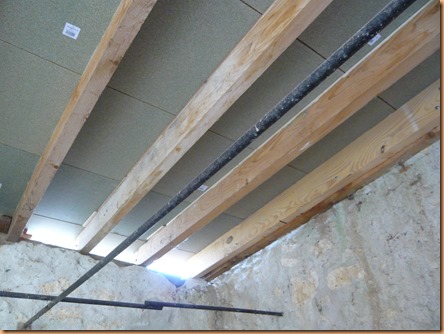 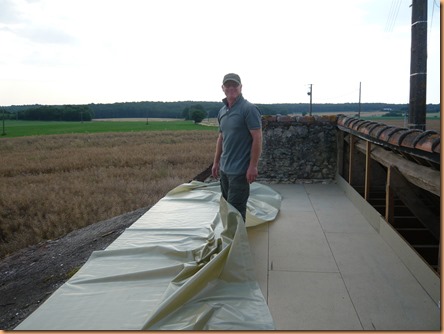 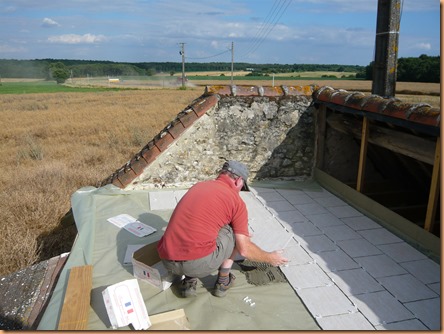 Having removed all the rotten floor panels and replaced a rotten piece of beam, the next stage was to fit new panels made of wood that is impregnated with water repellant, making them less likely to rot and become dangerous if they get damp.  A water proof membrane then went on top of that, followed by the tiles, a long and tedious job.

The previous owners of the house gave us a folder of photos of the renovation work that they and their predecessors did and looking through them it finally dawned on us why the roof terrace was there at all.  The reason is, we think, something like this:

The bedroom wall, with the dining room below (previously the bread oven area), used to be the end wall of the house.  There was a well standing beyond that wall. Someone built a roof over the well, creating the well barn (or well room, whatever you like to call it) on the end of the house. The pitch of the roof built over the well partly blocked off the window in the wall above.  This will not have been a window at the time, but an access into the roof space which would have been used for storage.  (There was a similar window giving access to the space at the other end of the house.)  Whoever started the conversion of the roof space from storage into bedrooms decided it would be nice to use that access as an actual window.  In order to solve the problem of the roof line blocking the window they decided to chop half of it off, creating a flat roof instead and hence the “roof terrace”.  I’ll post more pictures when its repair is completed. 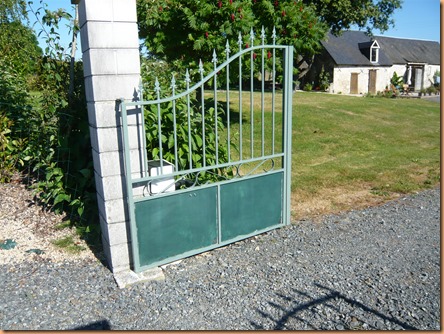 While Nick was beavering away aloft, I was busy painting the gates.  We considered buying new gates, more stylish ones, ready painted.  But we decided it would be expensive and not the best use of our money.  Better use would be plenty of good food, good wine, holidays and a pot or two of paint.  So that’s what we did.  It was a long job.  In fact it took me a whole week to prepare and paint the old gates and the new, not quite matching but near enough, side pedestrian gate which we fitted last year.  (Fitted so that we could stroll out with Lulu for walks without having to open the main gates.) 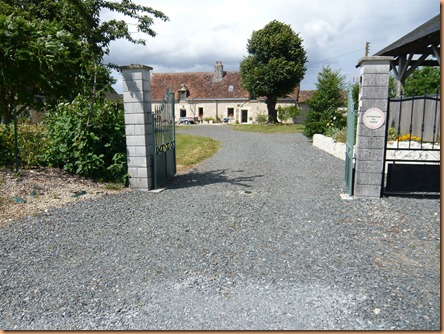 The effect I achieved is a little more shabby chic than I had hoped, largely due to having slathered something the consistency of treacle on vertical surfaces where it dried rapidly in the warm weather.  But the colour is nice, a kind of palish greyish green.   From a distance they look lovely and we’re very pleased with them.  All I have to do now is to paint the gateposts a nice creamy stone colour.  They can wait a while I think…….
11 comments: