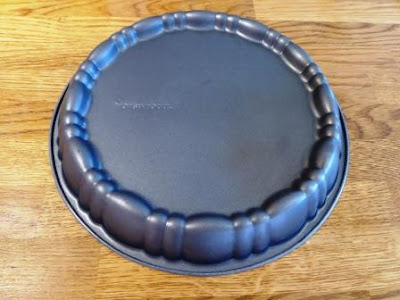 It has been a good year so far for brocante and vide grenier purchases.
In case I haven't mentioned it before, both are sales of old stuff, usually taking place in the streets of a village or on a playing field.  A brocante is a sale of bric-a-brac and is generally old stuff with a proportion of professional dealers of quality stuff.  "Vide grenier" means "empty the attic" and is often a sale of unwanted household stuff with fewer professional dealers.  At least, that would be my interpretation of the two terms based on what I see at these events.  Essentially they are both events where you can buy or sell your unwanted stuff.  If you're selling you can book a table or two for very little cost, turn up early morning, set up your table and wait for people to come along and buy.
If you're buying you can turn up at any time until late afternoon, wander round at leisure and haggle for the things you want.  Most of it isn't priced and will cost less the later in the day it is but you have to bear in mind that much of the good stuff is sold early in the day.  Most buyers will offer less than the asking price and get a bargain.  I'm inclined to think that if something is only 1 euro to start with, offering less is just a bit too cheeky!
The above is a flan tin that I bought in Ferrière-Larcon priced at 1 euro.  It is made by Tupperware, the plastic box people and its non-stick surface is in good condition.  Worth a punt for 1 euro I thought. 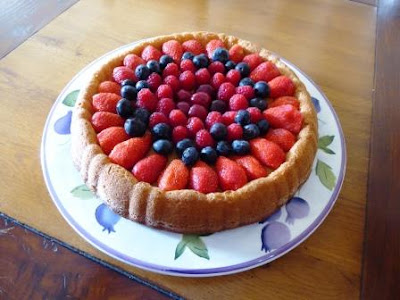 It turned out to be a real bargain. 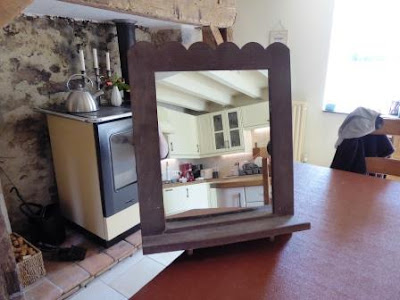 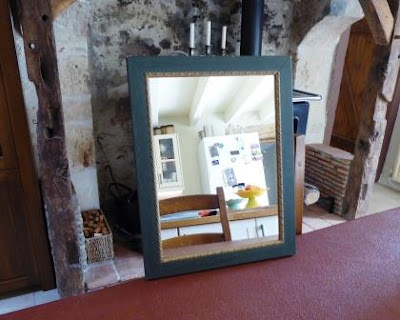 These two mirrors were 5 euros and 3 euros.
Having redecorated upstairs we needed new mirrors for the two bedrooms.  The top one has a shelf at the bottom for placing a hairbrush or other bits and bobs.  The bottom one has a green frame and fancy beading.  In both the glass is in good condition. 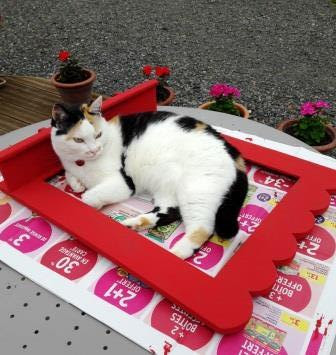 Having first removed the glass, I painted the one with the shelf a bright red to match some of the décor in the new small bedroom.  Within seconds of the paint having dried Daisy appeared from nowhere and sat inside it.  The same effect as leaving an empty cardboard box or basket lying around!
﻿I am always surprised at what you find for sale at French brocantes.  Amongst all the broken toys, unwanted clothes and useless ornaments there will be stuff that is really useful and probably not very old.  There will also be really old stuff that appeals to collectors.
Brocantes (or vide greniers) are good entertainment.  A good place for people watching, bargain hunting, bumping into friends and getting a glass of rosé and a bite to eat if you're lucky (and can bear standing in the queue).  There is rarely (I could even say never) a charge for entrance and parking is usually on street or in field and also free.  A fun part of life in rural France.
5 comments: This morning's trip to the supermarket in Loches introduced us to a new delight.
It's a sort of cheesecake made from goat's milk.
The Verneuil dairy is not far from us and produces milk, cheese, crème fraiche and, amongst other products I have not listed, this new gateau.  We often buy their dairy products so when the very pleasant young man was handing out slices of this to taste in the supermarket we couldn't resist.  Once tasted, we were hooked.  It was delicious!
I'm not huge cheesecake fan - all that fat and all those calories - but when the (quite nice looking) young man pointed out that the milk used has much less fat than cow's milk I thought - why not.  He suggests serving it with some coulis but I have a jar of caramel sauce that might be just right......calories - what calories ??  You can see their website here - turn the sound up!
6 comments: