NECESSITY IS THE MOTHER OF INVENTION 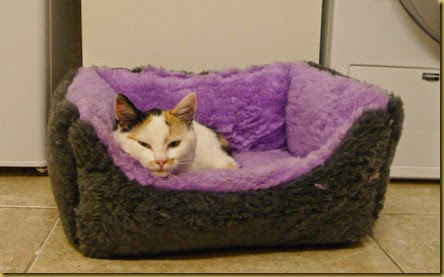 Having got Daisy back safe and sound from the neighbour and back to full health we then had to think hard about her future.  I was very worried that if she remained an outdoor cat the neighbour would steal her again.

So she became an indoor cat with outdoor options.

We took her to the vet and got her all the regular vaccinations plus a rabies vaccination and an identity chip, so that we could bring her home to the UK when we returned for a long spell.

The rabies vaccination was not done soon enough to bring her with us this time so we were faced with having to leave her in France for two weeks.  Our friends Tim and Pauline had offered to cat sit – to call regularly and keep her company, play with her, make sure she’s ok and keep the cat feeder topped up.

We felt very strongly that she would be less vulnerable to the neighbour’s uninvited attention if she could get into the house where it was safe and warm whenever she liked, rather than having to find shelter in the draughty barn.  We needed a cat flap!

The problem was, where to fit one?  All the doors into the house are made of full length glass, something we’re very pleased with as it makes the most of what light comes into the house at the front - as a typical longère there are no windows at the back and the front is currently shaded by an overly large lime tree.  Whilst it is possible to fit a cat flap into an existing glass door (I enquired once we got back to the UK) we hadn’t got the time to get that organised in France before we came away. 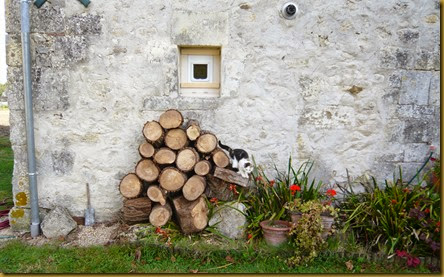 Tim and Pauline loaned us their spare cat flap and Tim made a wooden insert that fits the utility room window.  We constructed a cat ladder from a pile of logs and with a bit of encouragement Daisy soon learned how to go in and out. 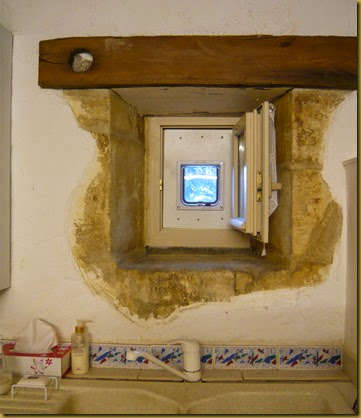 By which I mean that she learned how to climb in very quickly, because we started to keep her bed and food inside, but needed a little more coaxing to get the hang of going out.  We took the magnet off the closing mechanism as the door seemed quite hard for a kitten to push, and that helped.

The going out through the cat flap learning process was assisted by Lulu.  We were in the habit of giving Lulu her dinner outside the front door – she prefers to dine al fresco – and a race soon developed between the dog and cat as to who could get to it first.  Daisy would shoot out of the cat flap and down the ladder and we would sneakily open the door to make sure Lulu got there just ahead of her! 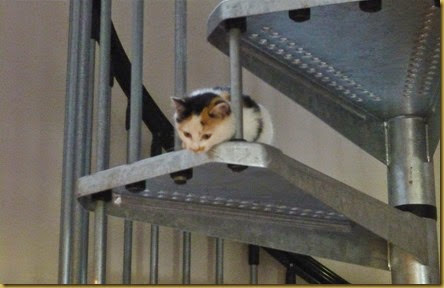 For the last two weeks Tim and Pauline have been keeping us up to date with her progress and sending photos.  She is thriving without us, it seems!  She has grown, her eyes have turned a gorgeous green, she is keeping the mouse population down and enjoys playing with the kitchen sponge and teatowel.  Which tells me that it didn’t take her long to work out how to get onto the kitchen worktops via the spiral staircase and the top of the fridge.  She’s a clever and fearless little thing. I knew that three-seater sofa would come in handy!

So we’ll soon be back in France and are looking forward to seeing how she’s got on without us.  Pretty good, I suspect!