TULIPS, VISITORS AND GETTING BACK INTO THE SWING. 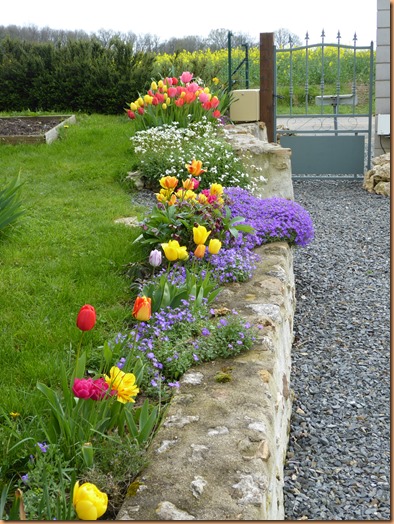 Having spent the first few weeks chez nous mending things and recovering from an exhausting six months in the UK, and a dreadful journey back to France (with my second nasty cold of the year so far), we are beginning at last to slip back into our French way of life. 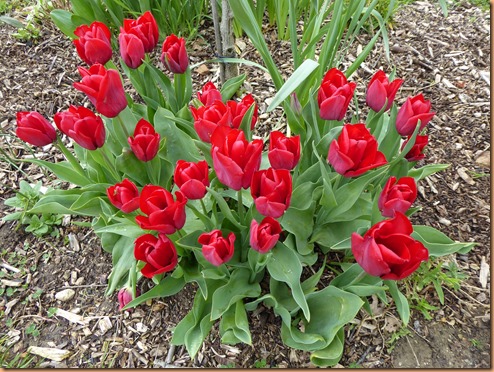 Our tulips soon came into full bloom and what a joy they were.  They are finished now of course, but every year I marvel at their shapes and sizes, filling the garden with a riot of colour just at the time when we need it the most to cheer us up and reassure us that it is, at last, Spring. 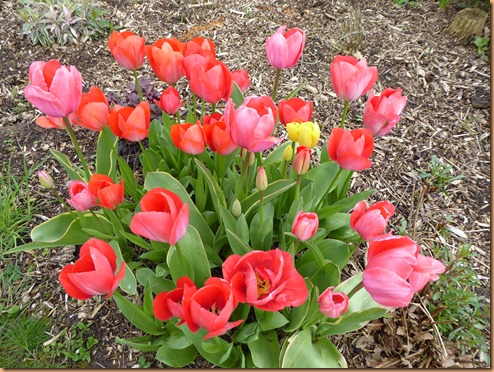 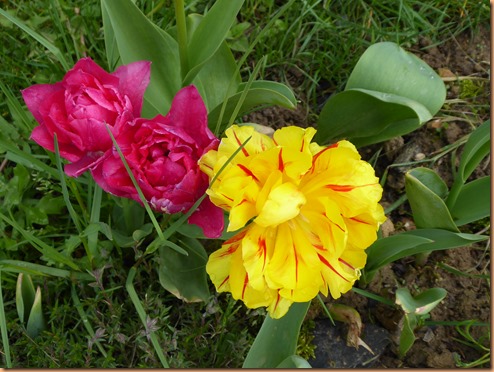 Nick had planted them during his flying visit back to “close up” the house last November.  The bulbs had been lifted after the flowers had finished last spring and he stuffed them into flower beds and pots. 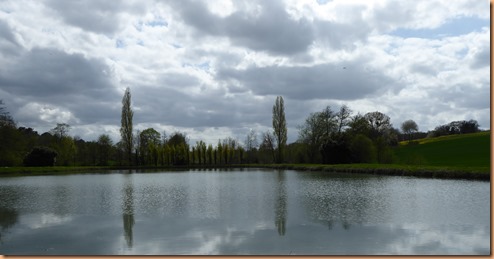 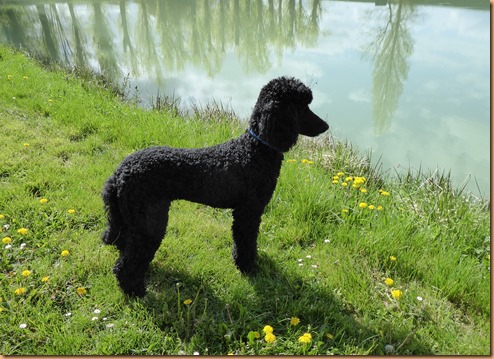 Hugo has taken to his new surroundings like a duck to water.  We have resumed the daily walks that we used to do with Lulu and he is loving every minute of it, exploring the sights, sounds and smells including so many things he has not encountered before.  In the picture above he was standing completely motionless (not a common occurrence), fascinated by the frog chorus at the lake at La Celle-Guenand. 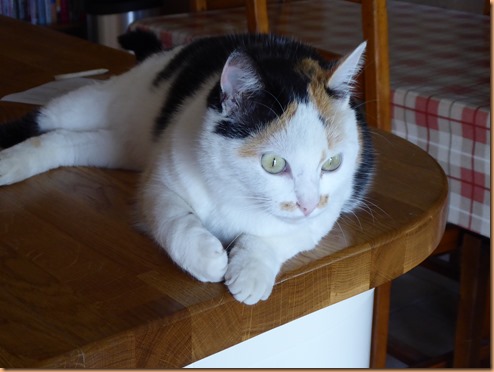 Daisy is delighted to be back in her real home.  She instantly reacquainted herself with her old surroundings and with the rodent population, quickly losing the weight she gained over the winter and becoming her old sylph like self. 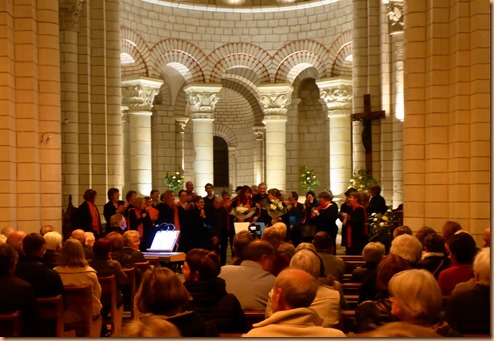 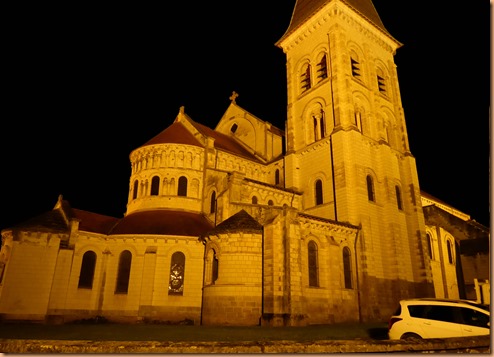 For the first couple of weeks we declined some invitations to events, feeling that we were not great company and needed to catch up on our sleep and reorientate ourselves.  Gradually we began to get back into the swing of things.  One of our first outings was to a concert by local choirs in the church at Preuilly, a spectacular event in fabulous surroundings. 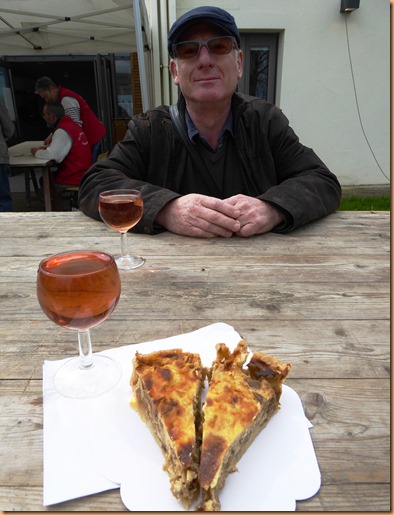 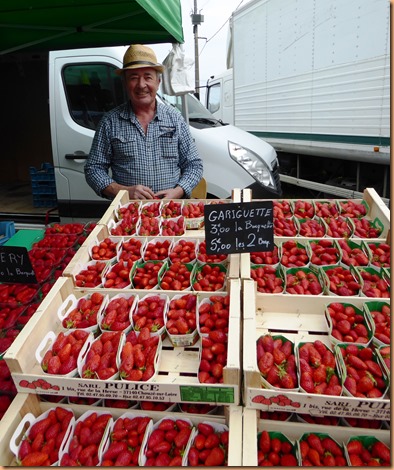 At the “foire à l’oignons” at St Branchs we enjoyed a slice of delicious onion tart and a glass of rosé as well as buying some lovely early season strawberries for our dessert later. 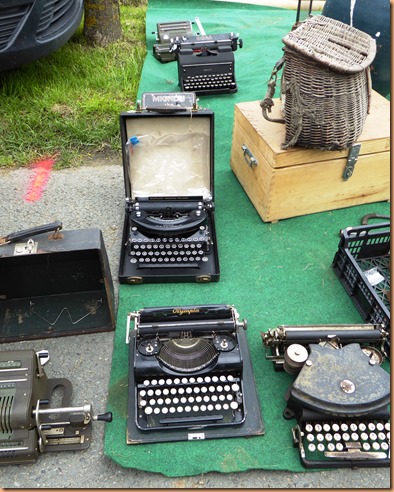 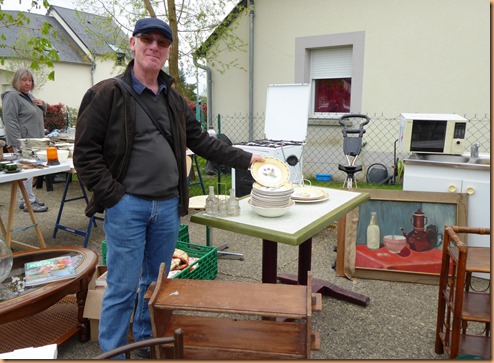 We resisted most of the bargains on sale, including a selection of old typewriters and a pile of plates that matched our UK dinner service – the one that was my mum’s Sunday best china back in the 80’s.  I wonder how they got there. 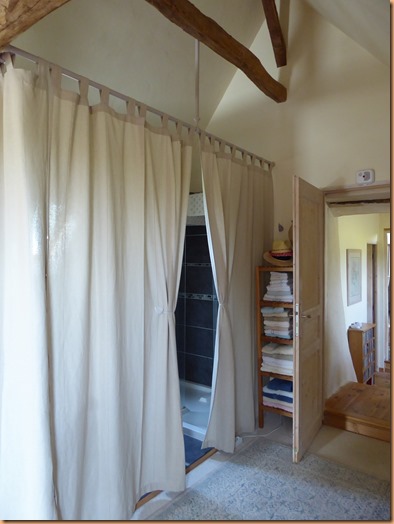 Since we returned we have got on with all the chores that are inevitable when a house has been empty for a long spell.  As well as repairing things, sorting out the garden and getting it ready for summer use, we had a lot of indoor cleaning and preparation to do for the arrival of our first visitors - my brother, my dad and his lady friend, Sybil.  We had decided to let Dad and Sybil have our bedroom for their stay so that they would be able to use its “ensuite” shower room, much safer than the shower over the bath in the bathroom, not to mention the two steps down to it.  The idea of either of them falling in the middle of the night as they tried to remember the steps on their way to the bathroom was not worth risking.  The only problem was – what to do about the open shower and toilet facilities in the bedroom that pass for the said “ensuite”.

This facility deserves a blog post of its own later but suffice it to say I didn’t think Dad and Sybil would be too comfortable with the view of the loo from the bedroom so as a temporary measure I screened it off using some curtains.  Nick says it looks “very French” but personally I think it looks a bit too shabby chic (or home made) for my liking, but it will do the job for now. 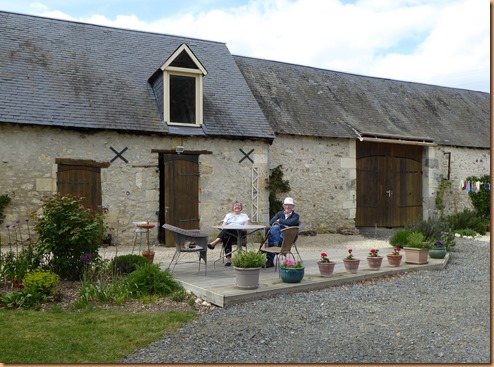 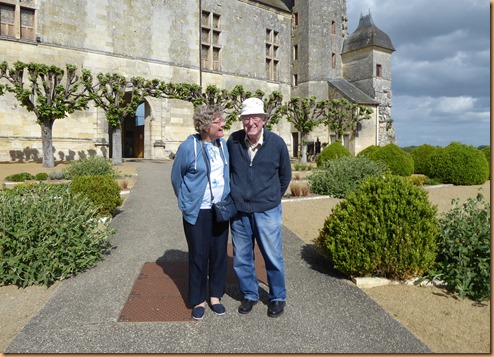 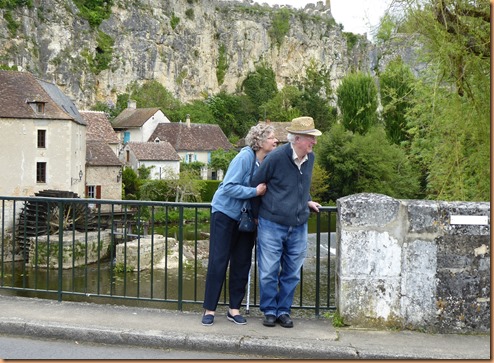 Our visitors have arrived and we’re enjoying showing them around the sights and the places that we love.  They’re having a great time. 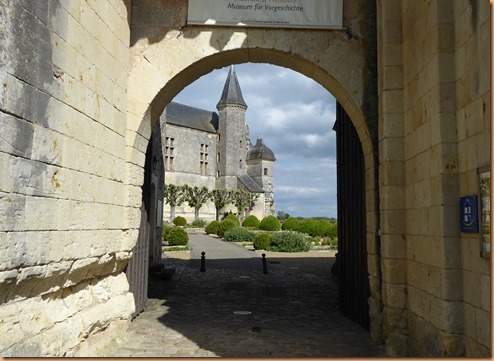 It is good to be back.  A whole six months away has been way too long but it certainly makes me realise how lucky we are to have a home in this beautiful part of France.   They say that absence makes the heart grow fonder but we were in the UK for so long that I was beginning to forget what it was like here.  Now that I’m back I wonder how I could ever have torn myself away. 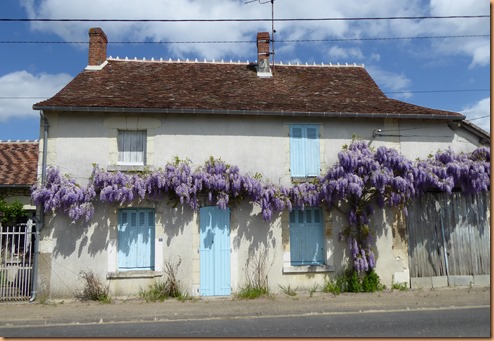 In reality I think I’m going to enjoy living in two countries.  The best of both worlds and how wonderful to be returning to France at such a lovely time of year, when everything is bursting into life and with the prospect of long summer days not far ahead.