People in the UK often ask if we’re going to live in France permanently and why we love it here so much.

Both questions are difficult to answer.  To the first I think we would probably say “probably”.  To the second it’s hard to be specific.  I just have to say “because we do”.  There are things about life in France that are slightly irritating but on the whole we simply feel happier here.  Happiness is hard to define but I just know that I am. 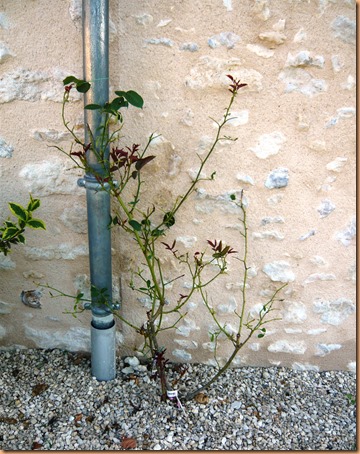 One of the things I love is living in the country, in the middle of a field to be exact.  In France we have the kind of house we could only dream of and never afford in the UK.  Even if you could find an old renovated farmhouse in a quiet spot in Derbyshire, surrounded by unspoilt countryside, with no road noise, the weather would probably be terrible and there is no way we could afford it.

There are however, drawbacks to living in this kind of property, and at the end of June this year we experienced one of them for the first time. 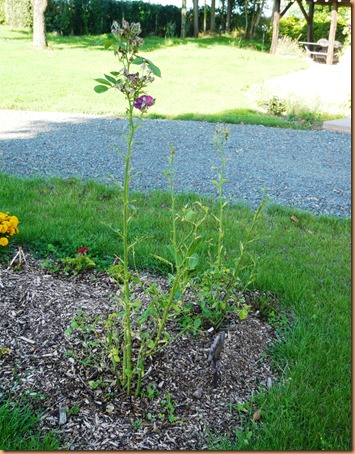 When we returned to France from our two week trip to the UK we found that all our roses had been eaten.  Before we left we had a fabulous display of roses.  All the plants were in full bloom and there were purple, red, orange, pink and striped ones.  They were gorgeous.  On our return we found that all the plants had been nibbled down to the stalks, leaves and flowers all gone.

Thinking that rabbits couldn’t possibly jump that high and in any case would have preferred our lettuces which were untouched, we were baffled.  What creature could possibly have been interested in eating only the roses? 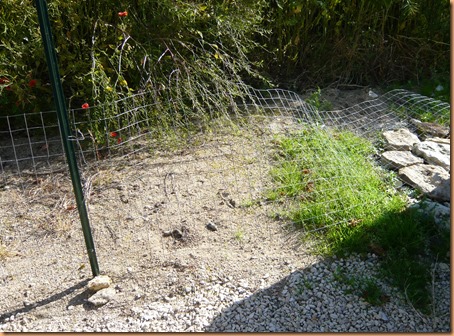 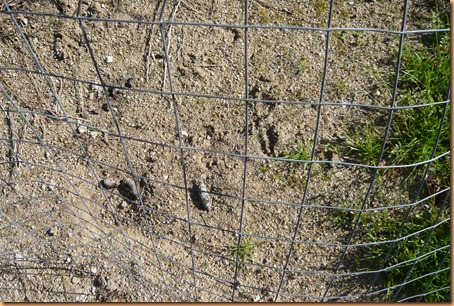 A stroll around the boundary revealed a clue.  Footprints.  Also, we have a camera installed by the barn that takes a picture when something moves in front of it, day and night.  The culprit was revealed.  A young deer, which took advantage of our absence and spent three days gradually eating all the roses.  It had trampled down the temporary fence at the back of the house. 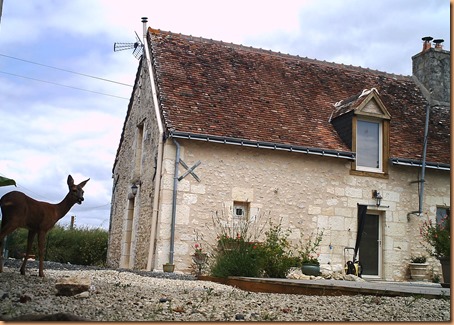 Now whilst I can’t say that having deer wander into the garden and eat my prized roses is completely wonderful, there is a certain charm and amusement about it. 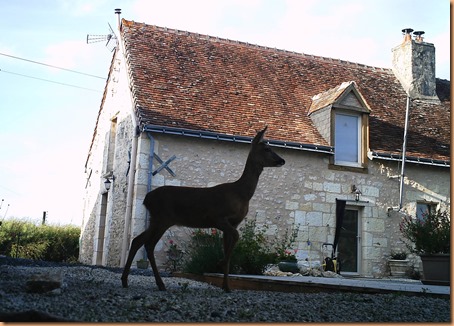 It certainly beats finding food wrapping and other rubbish tossed over the wall into the garden by the passing wildlife, a not unusual occurrence in our UK home.  There is nothing even faintly charming or amusing about that*.

Which brings me to another example of why I feel content and very at home in France.

For the last two weeks I have been in the UK because my father has had a cataract operation.  Before I set off, Nick and I went to lunch at one of the nearby “white van” places.  These are restaurants that cater at lunchtime for working people and serve a decent lunch for a sensible price.

The restaurant was pretty full and we were surrounded mainly by men aged between twenty and sixty odd years old, mostly in their overalls.  They greeted each other with handshakes, chatted quietly and ate politely.  A mobile phone rang and one of the younger men excused himself, got up from the table and went outside to take the call.

Here in the UK I took my dad to lunch yesterday to a local pub restaurant.  It’s a brand new one, the first building to go up on a new development of houses, shops and so on, and we were keen to try it.  There were only a few tables taken, mostly by older people (like us I suppose) but everyone seemed to be talking quite loudly.  At one of the tables a mobile phone rang.

A woman answered the call at the table, put the phone into speaker mode so that her husband could hear the conversation as well – and unfortunately so could the whole restaurant.  Every word.  That’s the kind of difference that makes me feel unsettled in the UK nowadays and very happy in France.  When we spend time in the UK we are left wondering when the British lost their manners.

*I am however reminded of a story told to me by a colleague at work some years ago.  He got up one morning to find that someone had tossed a brand new microwave oven into his front garden, still in its cardboard box.  This was in the days when a microwave was an expensive luxury item.  He used it for years.

A WINDOW OF OPPORTUNITY FOR THE OUTBUILDINGS AND THE ROLLING STONES 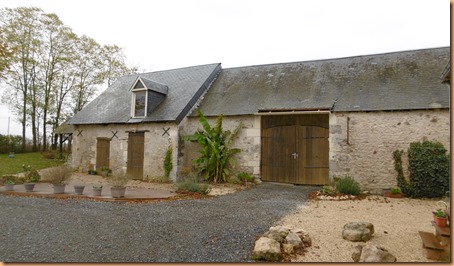 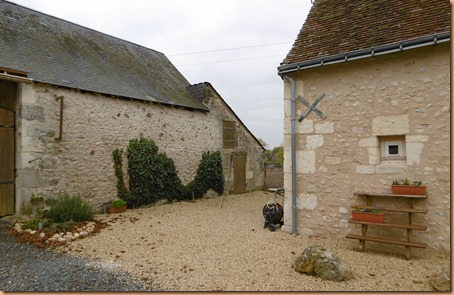 One of the things we really liked about our house when we first saw it was the number and size of its outbuildings.  To the side of the main house at the front are a large barn with good big doors, a smaller barn that looks like a little house and an even smaller barn at the other end that looks like it was added on later.

This tiny end barn was the first one we tackled in the sense of making it more useful.  It was known by the previous owners as the potting shed and indeed there were many discarded plant pots, wooden shelves and other garden related stuff in it.  The big problem was that you couldn’t actually stand up in it!  The height of the upper floor was the same height as the door, at about forehead height.  You could only get in there by stooping, which made it just impossible to use, so we solved this problem by knocking out the ceiling and cutting off the beams that formed the floor.  Now it is perfect as the wood shed, just the right size and opposite the new side door so that wood can be fetched into the house from just a few steps away.  Nick has improved it even further by putting a light in it. 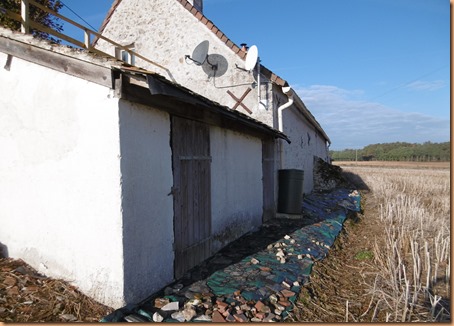 At the back of the house there is another building that was added to the end of the house more recently (in the twentieth century, judging by its construction) which has been divided into two sheds with outer doors, no windows and feeding troughs.  No doubt some poor hapless animals were kept in there at some stage, when the land behind the house was still part of the property.

All of these outbuildings came with a certain amount of discarded junk, to which we have added in the course of our various projects.  They are great storage facilities and our furniture has been in and out of the barn more than once as needed - to make way for the builders to get on with their work.  It was time for a proper tidy up!

Early autumn was the window of opportunity to do something about it. 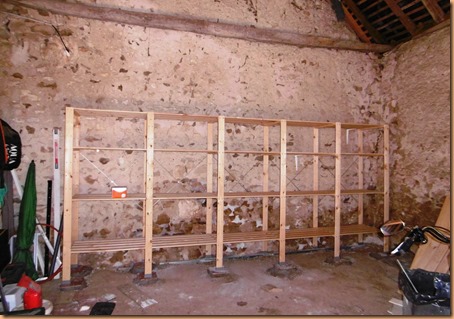 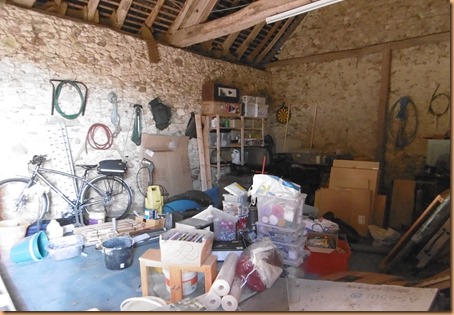 In order to make order out of chaos we needed fine weather. The summer was too hot but the fine, dry weather we had a few weeks ago was ideal.  To reorganise the space in the large barn we needed to be able to take everything out, sort through it and put it back in again, in an organised fashion.  The building of some extra shelves helped. 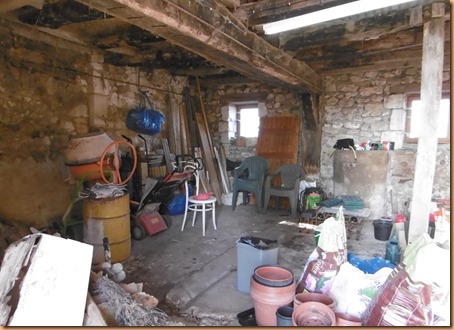 The little house used to be the wood store but is now mainly used for storage of garden stuff.  When we moved in it had the problem of the floor becoming a river when it rained heavily.  This was solved by fitting guttering to the back of the building so that rain water runs off into the field instead of down and under the walls and across the floor.  The usefulness of the space was improved immensely for what was really very little effort and cost. 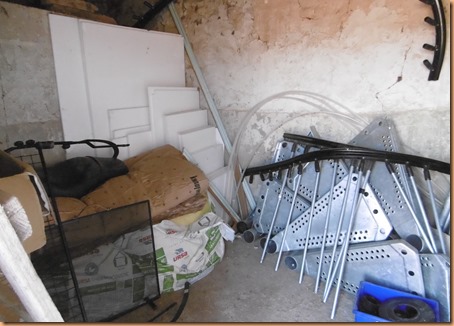 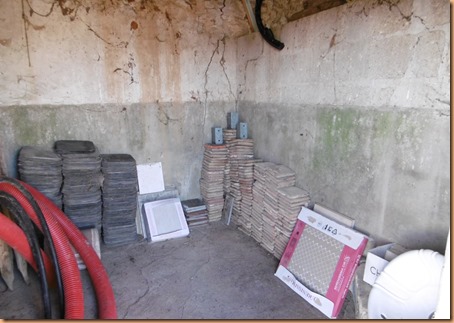 The animal sheds at the back are less useful because the access is difficult but they are nice and dry.  So, having removed various items of junk we now use them to store stuff we might need one day but not very often. 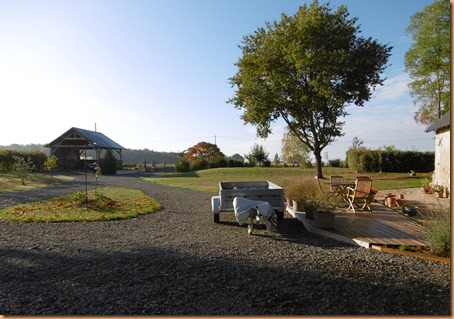 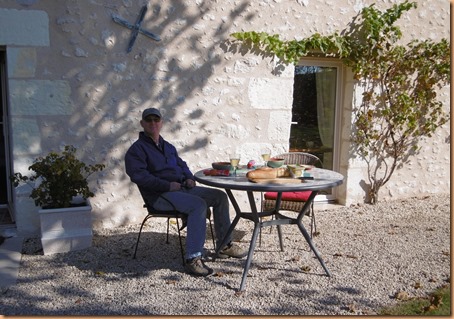 You can’t beat a bit of tidying up and clearing out.  The whole process is both cleansing and fulfilling and gives a huge sense of achievement.  During the pleasant and sunny days of mid October we were able to knuckle down and more or less get the job done.  Lunch outdoors in the sunshine most days made the hard work quite pleasant. 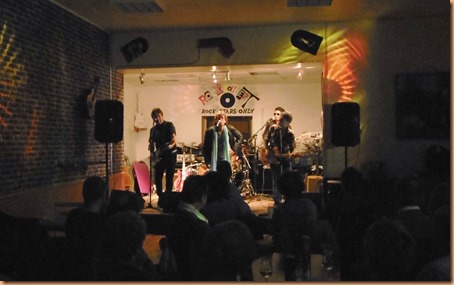 The wonderful weather was never going to last forever, of course.  On the evening that we went to see the Rolling Stones in Descartes it rained as we came out and it has rained on and off ever since.  It’s now cold, wet and distinctly Novemberish but we’re okay with that.  We have had an amazing summer and the early autumn was gorgeous.  With so many of our outdoor jobs now completed we’re happy to batten down the hatches in front of a log fire and relax a bit.

As for the Rolling Stones – they were actually a tribute band called “The Fortune Tellers” who performed at a little bar in Descartes a couple of weeks ago.  They were fantastic.  They reminded us very much of some of the better bands we used to see at motorcycle rallies and we had a great evening.  Not only that, we paid nothing to park the car and nothing to get in - so very French.  Amazing.