When we were about half way through our week in Le Grand-Pressigny at Easter, Nick came back with Lulu from their morning walk with a very strange tale to report. Something about a seven-metre long trail of caterpillars. Intrigued, we both picked up our cameras and set off back up the hill to the château. 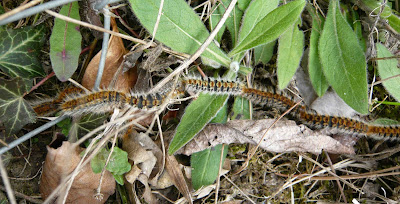 Sure enough, there they were, several incredibly long lines of large and very hairy caterpillars, moving very slowly, all joined nose to tail. How wierd. 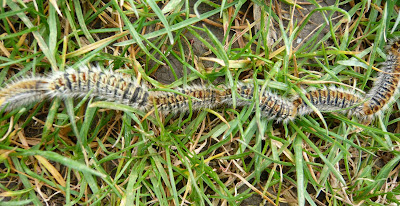 Every so often, there would be a little pile of them. 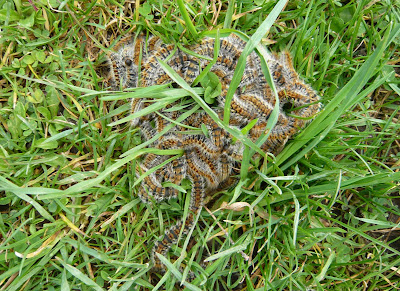 On further investigation the trail seemed to be coming out of, or going into, the little wood behind the château. Then we looked upwards and saw something that looked like a nest in a pine tree. 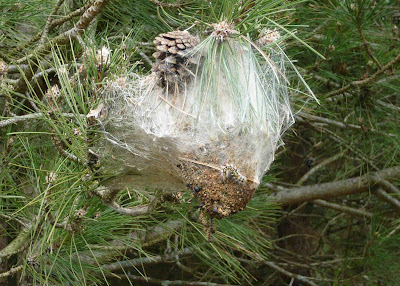 We guessed that this must be the source of the trail as caterpillars seemed to be dripping out of it. In fact there were quite a few nests in the trees. 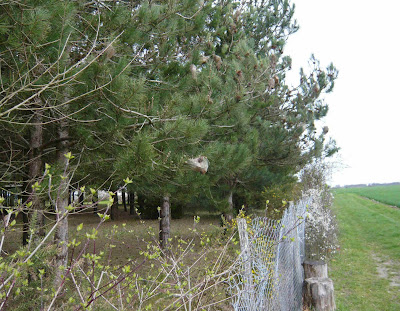 We mentioned this to Barrie who told us they were called "processional caterpillars" and they were poisonous so we mustn't touch them. 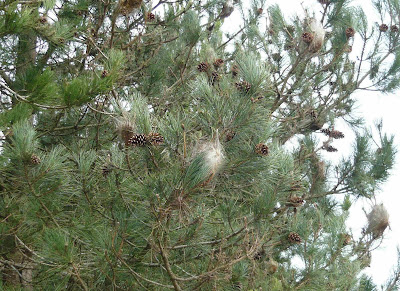 This probably explained why Lulu was quite off colour for the rest of the day. She was sick after her breakfast and yelped as if she was hurting somewhere, presumably caused by a reaction to having sniffed a caterpillar. Nick said he was sure she hadn't eaten one and there was no sign of an allergic reaction around her mouth or nose. But she was off her food all day and wouldn't even take her favourite treats.

Susan of Days on the Claise confirmed Barrie's warning and has recently mentioned them in her post here and included a link to more information here, if you would like to read more about it. Now that we know about the perils of processional caterpillars, we will be sure to keep away from them next year.

I am adding Ken's link here, and if you really like having nightmares read the section marked "dangers" ! 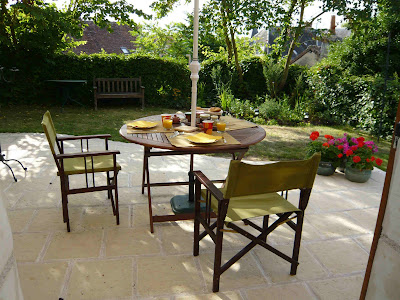 If only all Monday mornings could be like this.
4 comments:

ANOTHER DAY, ANOTHER MARKET - LA ROCHE-POSAY

At the tourist office in Le Grand-Pressigny, you can pick up a leaflet giving details of market day in all the towns and villages in Touraine. It's very useful.
So, during our week there over Easter, we went to the market at La Roche-Posay which is on Tuesdays. 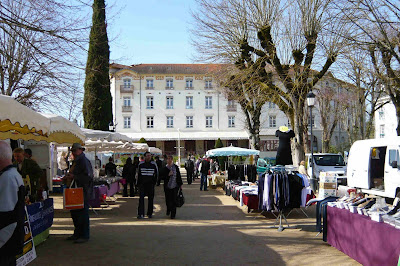 La Roche-Posay is a small spa town about twenty minutes drive from us. I am told that if you are suffering from certain ailments you can have a period of rest and a stay in the town prescribed for you under the French health system. What a great idea. We have also noticed people helping themselves to spring water from a tap in the village square. Tuesday was a fine but cool day. We arrived at the town to find the market in full swing, along with a small funfair. The bright sunshine really brought out the colours of all the goods on display. 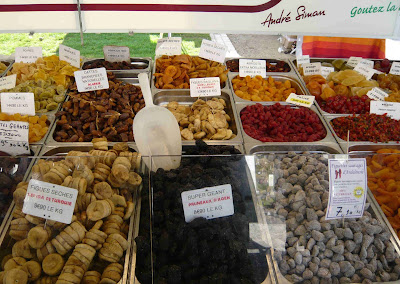 We bought olives and sundried tomatoes from the olive man. 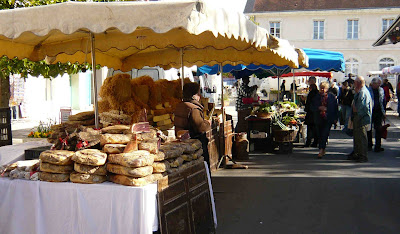 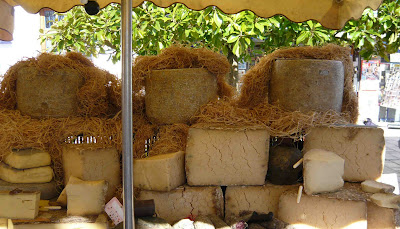 We bought some cheese from the cheese man. 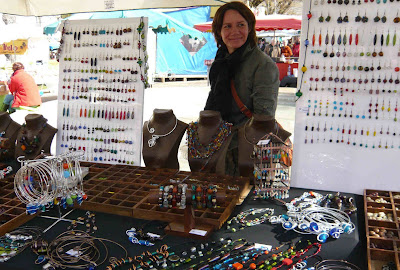 I bought some beads from the bead lady. 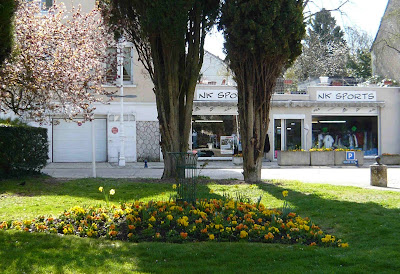 There was a stall selling ladies clothes and I noticed that the lime green colour we had seen in Amboise (here) seemed to be very predominant. In fact, later in the week we had lunch at the creperie in Descartes and that had also been redecorated in the same green, contrasted with a dark chocolate brown. It looked very smart and attractive. I asked the owner what the colour was called, was it citron vert or perhaps pistache? She said it was called vert anis. As luck would have it, I had just the previous week bought myself a new cardi from M&S in the same colour and was able to wear it on my hols feeling very à la mode !! 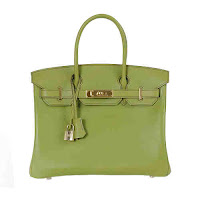 An example of vert anis. I didn't get the Hermes bag, just the cardi !!