KITCHEN, FOSSE AND KITTEN UPDATE – AND A PUZZLE

First, the fosse.  Despite unfriendly weather and plenty of delays, Fred the contractor managed to get the fosse ready for inspection by Satese on the 20th and it passed.  Tant mieux !!

The holes in the ground can now be filled in and then the new drive installed.  By all accounts the courtyard and garden are one huge mess and advice is that we should stay away for a while longer.

There is still no sign of the new boiler. 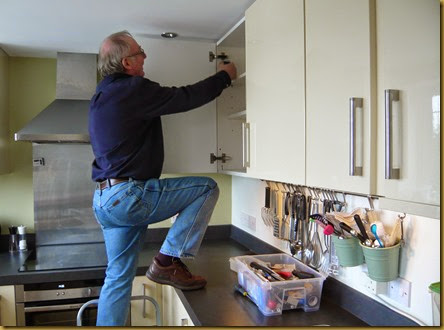 Second, back in the UK we have found out the hard way how important it is to have the kitchen fitted properly – and potentially how much better the job might be by doing it ourselves, or at least with the help of people we know and trust to do a good job. 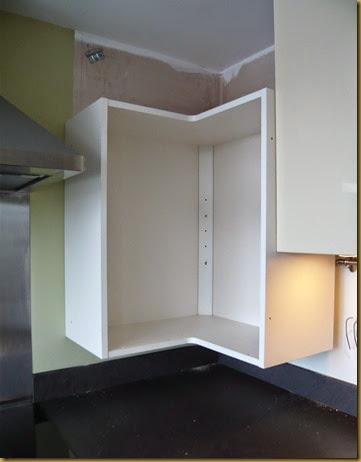 Not long ago I noticed that one of the wall units seemed to be leaning at a slightly jaunty angle.  We came to the conclusion that this was a recent occurrence and decided to investigate. 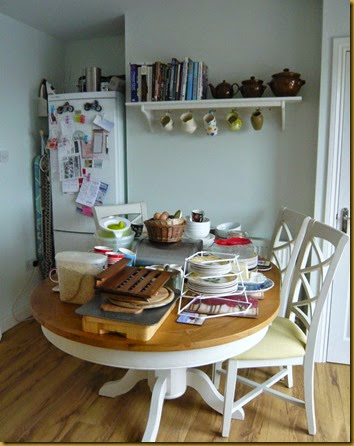 Once the contents of the cupboard were removed, Nick took it apart and discovered the reason.  The bracket that should have three screws holding it up had only got one screwed to the wall!

No wonder the cupboard had slid forwards, full of our crockery and other stuff. 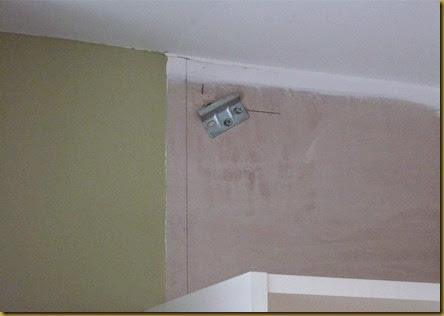 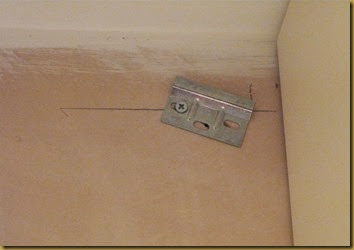 Further investigation revealed that the next cabinet along was just the same.

When we bought the house one of the things that made us decide on this one was that the kitchen, along with the rest of the interior, was brand new.  The house had been recently renovated and had a completely new interior, including the kitchen, bathroom, electrics – everything.  It was like buying a brand new house in an old shell – all the character of a 1930’s house but with modern fittings.

Little did we know that there were numerous nasty surprises lurking behind the brand new interior.

So far we have fixed the leak under the kitchen sink, the leak under the cloakroom sink, the alignment of the downpipe from the bath – discovered when we noticed the bath water running down the drive onto the road! Also we have had to refit the built-in dishwasher so that the door opens properly – it was mounted too high in the unit and the door would not open completely.  Last but not least we have replaced electric sockets that didn’t work.

Hanging anything on the walls is near impossible.  The bricks are hard as iron and the plasterboard cladding over them is very soft.  We have tried every fixing screw known to man and in some places none of them work.  Hence presumably the reason the cupboards were hung so badly – whoever fitted the wall cabinets probably gave up, left them hanging on one just one screw and hoped nobody would find out.

We can grumble all we like about the standard of workmanship and how nobody takes any pride in doing a job properly any more, but this experience serves to convince us that we are doing the right thing in fitting our French kitchen ourselves. Or rather helping people we know and trust to fit it for us.  It might take a bit longer to get it finished but at least we’ll know it will be done right. 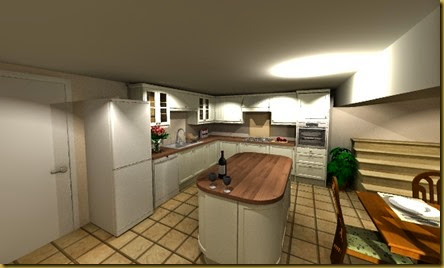 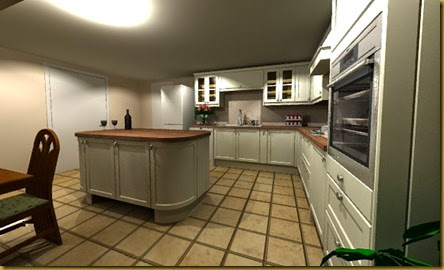 Latest design images from the kitchen company have arrived and we’re very excited!  There’s still some tweaking to be done before the final order but so far it’s looking good. 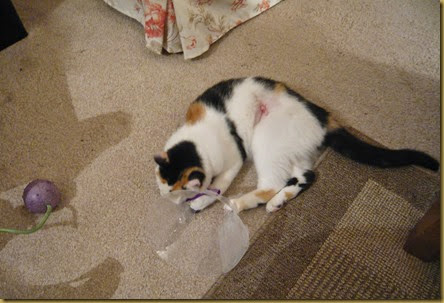 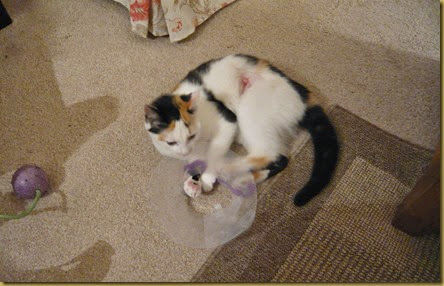 Thirdly, little Daisy had her operation this week.  No more risk of kittens for her (or us).

On collecting her from the vet we were told she had had to be fitted with one of those lampshade collars to deter her from licking her stitches – and that we should keep her quiet for the evening.

There was no chance of that!  As soon as we let her out of the cage she hurtled everywhere, crashing into everything because of the collar and that didn’t last long either!   It took her all of five minutes to wriggle out of it.  We refitted it and five minutes late she had extricated herself again. 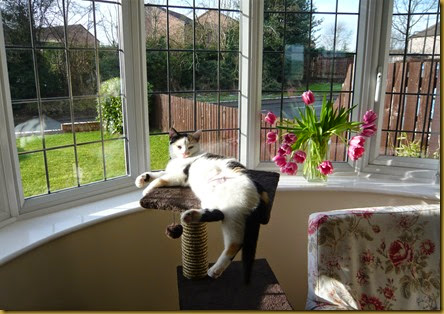 She was ravenously hungry and having given her the vet’s recommended light diet of scramble egg she continued to beg for food and tucked in to a hearty dinner.  This cat is fearless, clever and utterly adorable !! 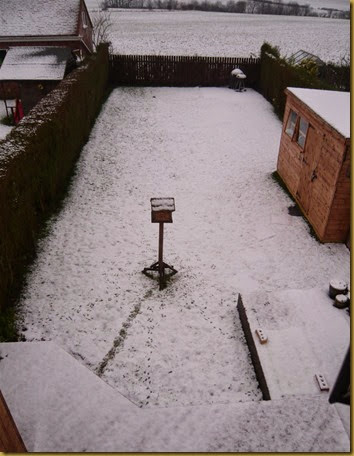 Finally, after a moderate snow fall on Wednesday we looked out of the bedroom window to see a strange pattern of tracks and footprints centred around the bird table.  There were plenty of bird prints and a noticeable pathway of something else – leading from under the decking.

What do you reckon?  We fear the worst.

more of the same Daisy, DIY, Kitchen, Life in the UK, Puzzles 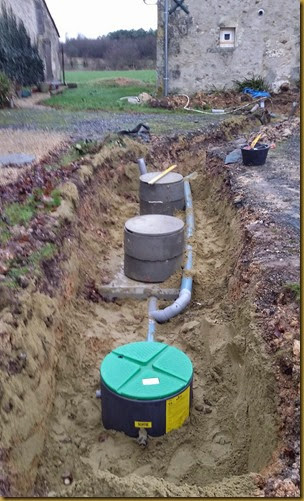 Work continues on the new fosse in our absence.  Progress has been slower than hoped because the weather has not been too friendly but a date has been set for the inspection by Satese of the finished job for 20th January, so the work has to be completed by then.

Once the fosse is installed, work can begin on the new drive, so we’re still on course for the outside work to be complete by the end of the month.

There is some progress in our search for a new kitchen.  Back in December we had a visit from a salesman from a kitchen company in Tours.  We liked one of their ranges of kitchen units in the showroom but after he had been we felt a bit let down.  We were already losing confidence in him because he had failed to turn up for his first appointment chez nous, even though we had made an extra trip to Tours to decide on cabinet doors, worktops and handles, which must have shown how keen we were.  He looked at our existing kitchen and came up with a pencil design on a piece of paper that looked remarkably like what we already had, except for the addition of things that we didn’t really want but that he insisted were the right things to have.   Then he went away promising to email us alternative designs but so far we have heard nothing from him. 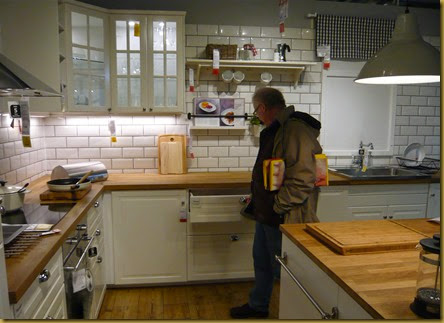 So we decided to have a look at displays of kitchens over here to get some ideas for ourselves and try to decide what we really wanted.  We liked this range in Ikea with its glass fronted cabinets and the island unit.  It had a nice traditional feel to it but with modern features. 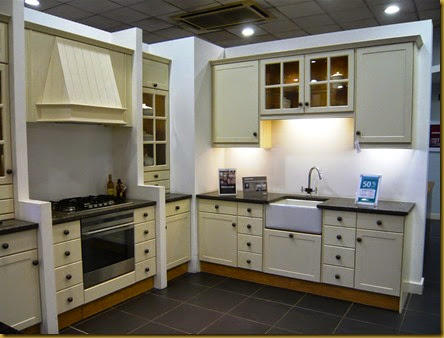 Then we called at Magnet and really liked this range of units.  The store manager and his staff kept a discreet distance and didn’t pounce on us but when we asked questions they were extremely helpful.  This range has the largest variety of shapes and sizes of doors, drawers and cupboards which we thought could be very handy when working round our uneven walls and beams.  He also said that they regularly supply kitchens that are shipped abroad.

We were beginning to like the sound of this.  Our visit from the kitchen designer from Tours left us feeling nervous and uncomfortable, not at all sure that we would end up with the kitchen we wanted without a struggle.  I hate to give in to the lure of dealing in our native language and chicken out of grappling with a French company, but we felt that with something as personal and important as a kitchen we needed to get it right.  Principles might have to be sacrificed if necessary.

We made an appointment to return a few days later to talk about it in more detail and explore a possible design.  That gave us time to talk to Alex and Nicole about the possibility of fitting the kitchen ourselves, as a joint effort between us and them.  They were happy to help and we felt relieved, thinking it would be great to be involved rather than hand the whole project over to strangers, letting it out of our control. 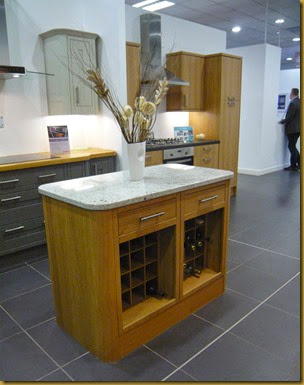 As the planning of our new kitchen evolved we looked around the showroom for ideas and for features that we liked.  This island unit caught our eye. 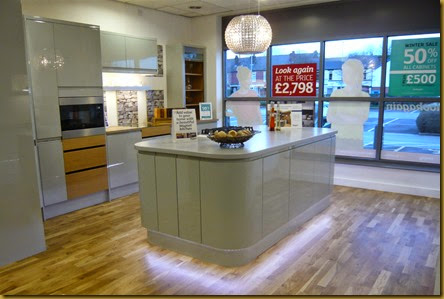 So did this one, although I’m not too sure about the twinkly lights around the bottom! 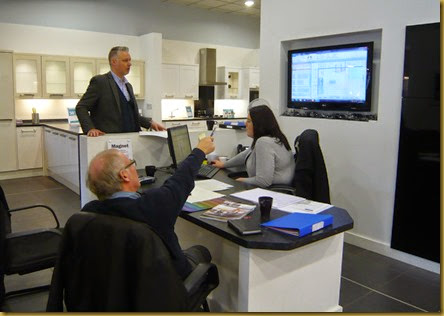 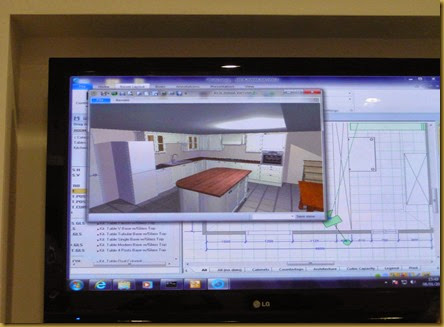 We were in the showroom for 3½ hours in all and eventually a plan emerged.  It is more than thirty years since I had a new kitchen (except that our UK house already had a brand new kitchen, not of our choosing, when we moved in) and things have moved on a bit!  The design was done on a computer and everything was displayed on a large screen in front of us so that we could see at every stage how it was working out.  Marvellous! 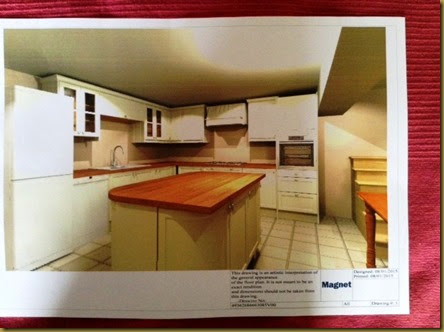 And here it is!  This is actually my photo of an A3 print out of an “artist’s impression” of the finished design.  The view is from the front door so that on entering the kitchen you will see a nice space and a swish island unit instead of a grotty wall and the back of the sink! (Or a breakfast bar and set of fancy bar stools if the Tours man had his way.)

There’s a bit of fine tuning to be done before the kitchen is manufactured but we’re hoping for delivery in April.  With any luck we will have a new floor, staircase and kitchen by the summer.  Fingers crossed!