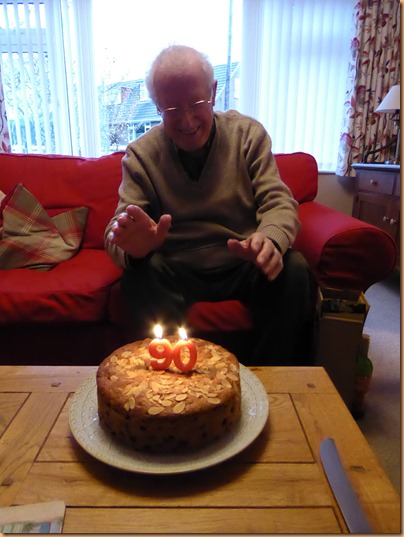 It was with a heavy heart that we left our house in France at the end of October but there was a good reason for it – two birthdays – Dad’s and Nick’s in mid November and on consecutive days.  Dad turned 90 and we had a small family celebration with a cake – a fruit cake at his request.

He’s doing remarkably well, still totally independent and still driving.  Regularly visiting his lady friend Sybil who lives 80 miles away, doing his own shopping, cooking and washing.  He is amazing for his age. 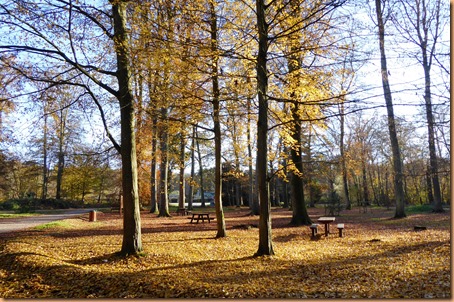 A week after the birthday celebrations we were on our way back to France for just a few days and for the last time this year.  We had spent just three weeks in the UK but there was unfinished work to do in the garden and the house before we could leave it over the winter.

What a change there was in our surroundings.  The leaves now lay in glorious golden carpets around the trees and there was no denying that autumn was in full swing. 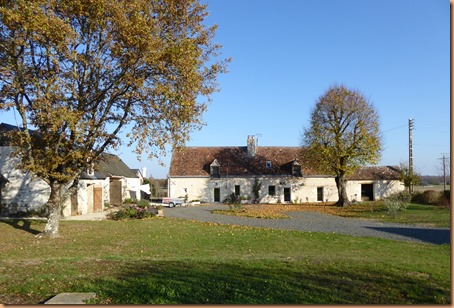 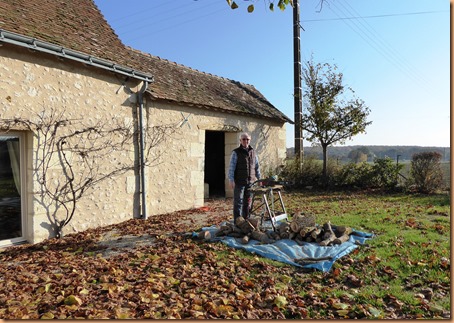 For our first day in France we enjoyed beautiful sunshine, perfect for getting the garden work done. 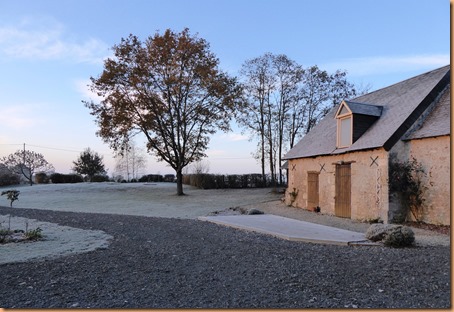 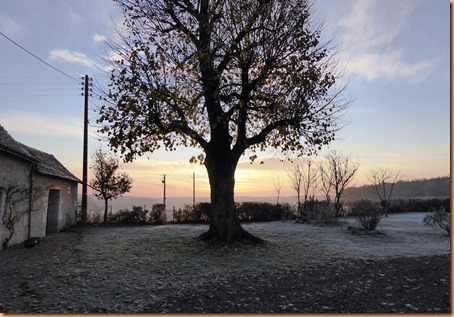 It was a completely different story when we awoke the next morning.  Almost as if someone had decided that it was time for winter and flipped a switch.  There was a deep frost and a beautiful sunrise.  Our garden was bathed in still, grey and tranquil colours. 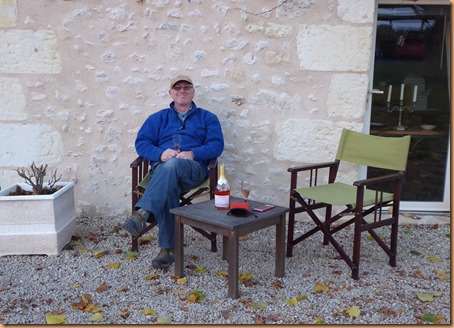 It would take more than a little chilly weather to stop us from sitting out and enjoying our last few days, making the most of any warmth in the sun.  In true north of England fashion we donned our hats, scarves and warm jumpers and had our apéros outside.  (Much to the amusement of passing neighbours who are now convinced that we are totally mad!  Several cars slowed down for a second look just to be sure – yes, it’s the English, sitting out in the freezing cold again!) 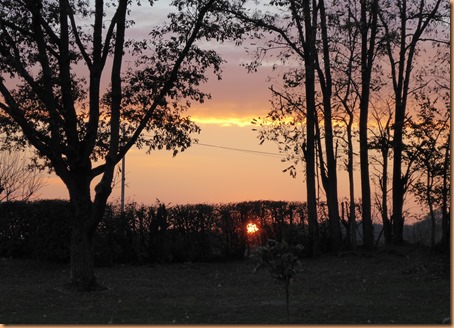 It was worth getting chilly for the view.  This view was to have to last us for several months, over the winter, imprinted in our memories, until we return next spring.

After all the months we have spent in France this year, it was in these few days that we made our decision and formulated a plan for our future in France.

I can’t deny that the idea of Brexit (that awful word) fills us with dread.  Already we are financially much worse off since June 2016 when the value of the pound against the euro took a nosedive.  All our French shopping and household running expenses cost 20% more than they did then and that takes some finding.  We have had to make savings elsewhere to be able to keep the house and this will only get worse.  Once the UK leaves the EU it’s likely that there will be more paperwork and expense in order to spend possibly less time in France than we do now and we have had to think carefully if we really want to carry on like this. In fact if we can afford to carry on, keeping a house in France at all.

Undistracted by pets, visitors, shopping trips or anything else we hunkered down and just immersed ourselves in our little corner of France for three days and four nights.  We had spent only three weeks back in the UK but we were already worn down by the noise and mayhem of UK life.  To have our little haven of peace and tranquillity in France means so much to us and the few days we spent there in November convinced us that for now – we are not leaving.  It will take more than some extra paperwork and expense to make us give it up.  We will have to make sacrifices elsewhere but it will be worth it. 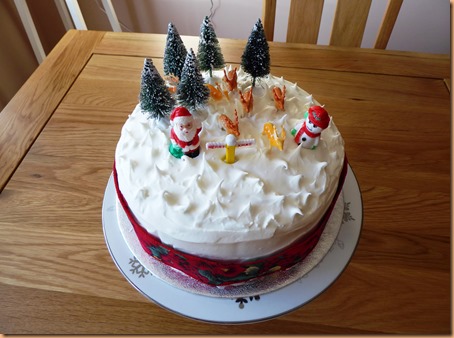 And so we are back in the UK for the winter.  For the first time in years we have had the time to make a proper job of getting ready for Christmas.  The cake is made and iced in good time, the decorations are up, the presents are wrapped and we’re looking forward to a day or two with the family.  Then we’ll be looking forward to our return to France in the Spring.

MERRY CHRISTMAS AND A HAPPY NEW YEAR TO YOU ALL !!

more of the same Differences, Family, Life in the UK, Referendum, Thoughts

AND SO THE NEVER ENDING SUMMER INEVITABLY CAME TO AN END. 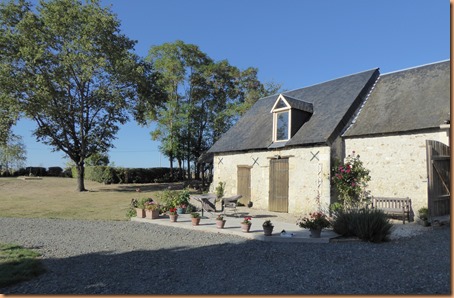 By the middle of September all our visitors had gone and we settled into what turned out to be our own little summer holiday. 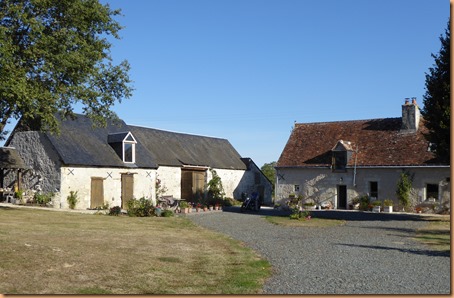 The glorious weather just went on and on and on, well into October.  The days were warm although there were the tell-tale signs that autumn was just around the corner.  For us, coming from a cooler part of the UK, where the weather gets cool and wet in September and doesn’t cheer up until May at the earliest, this seemed to be like an endless summer. 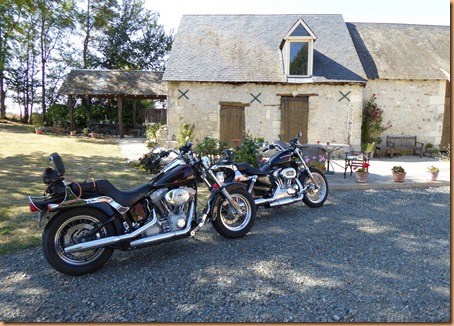 We dusted off the Harleys and took days out for road trips.  The weather was perfect, warm enough to enjoy the ride along the beautiful, almost deserted roads, yet not hot enough to feel overheated.  I had almost forgotten how much I loved riding my motorcycle and in fact could hardly remember the last time I rode it.  We made up for lost time in September. 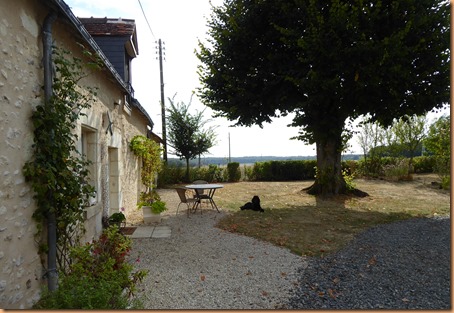 The only disappointment was to see the garden suffering so badly.  With the last of the rainwater in our cube we brought the pots back to life and restored flowers and colour to the garden – but there was nothing we could do for the grass.  It was however a small price to pay for having our extended summer.  We were having a wonderful time, exactly how we hoped life would be when we first moved in four years ago. 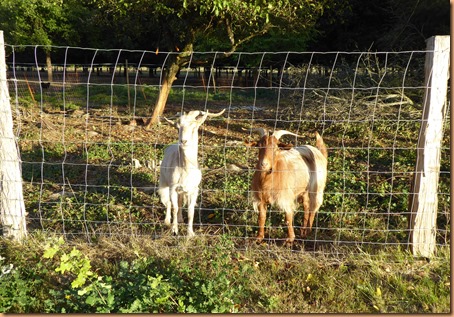 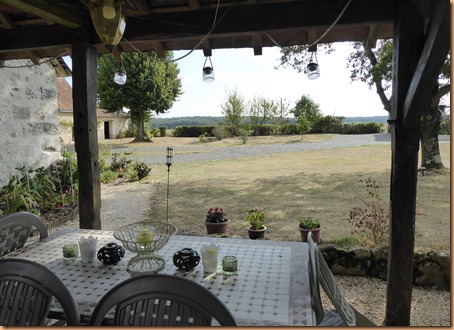 Most evenings we would take a stroll to the nearest hamlet, where the two goats rushed to greet us, ready for their treat of leftover baguette.  Hugo was fascinated by them.

We ate outdoors every day, always at lunchtime, but it was the evenings that were really special.  We would eat under the shelter, light the candles, and sit for a couple of hours, until well after dark.  Once the bats had finished their aerial display we would listen to the crickets, the owls, the foxes and the deer calling.  Magical times. 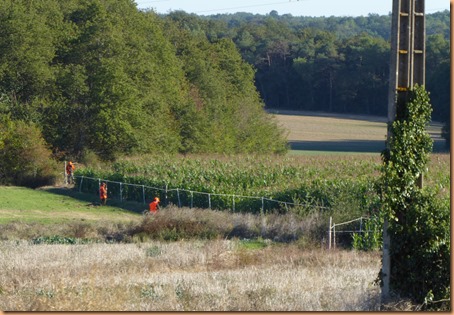 By the beginning of October the hunting season was in full swing.  We would hear the guns going off from early morning and had to think more carefully about where we took Hugo for a walk, to make sure we didn’t come across hunters in the forest. 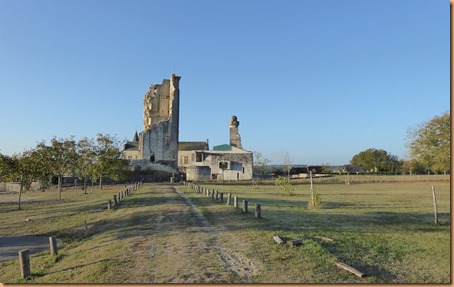 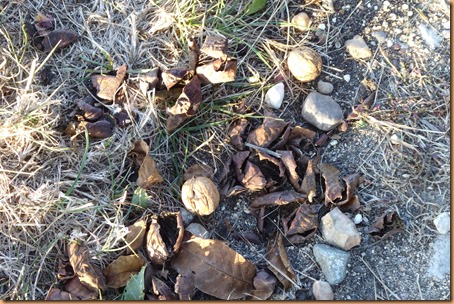 We returned to our old haunts more often, the walk around the château being one of our favourites, with the added bonus of picking up walnuts from the ground along the way. 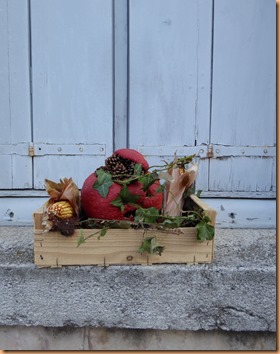 Pumpkins began to appear as decorations on windowsills in the village.  Autumn was definitely here in name but for us it was still summer. 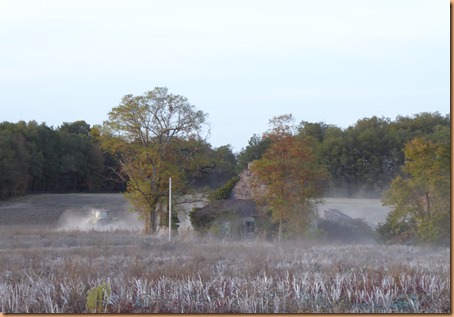 In late October work began again in the fields, the tractors making clouds of dust as they worked the earth, baked dry by months without rain.  This seemed to us a sure sign that rain was expected and the endless summer would, inevitably come to an end. 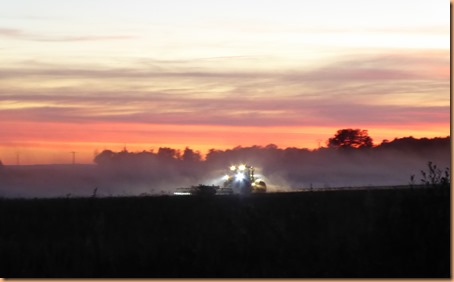 They worked until long after sunset.

With the shortening of the days in October we began to feel the weight of our return to the UK looming.  With a combination of sadness and joy we made the most of every minute, eating and working outdoors in the still beautiful weather.  I was dreading our return to the land of bad weather, bad manners, bad traffic, noise and litter.  Leaving behind the clean grass verges, the easy driving and the peace and quiet.  Once the job of tidying up the garden for winter was started, putting away the chairs and tables, we realised that we had spent so much time just enjoying being in our lovely house in this beautiful part of France, that we had almost run out of time to finish the work.