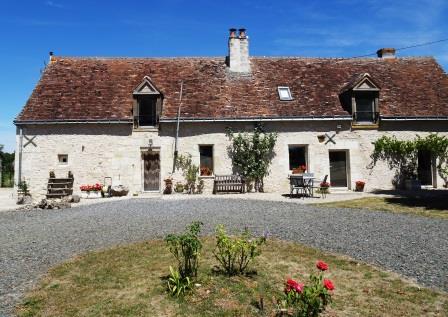 We are experiencing yet another heat wave here in France.  They're becoming worryingly frequent.

We delayed our trip to France until the 21st July to avoid travelling in the last heatwave, so on this day two weeks ago we were sitting on the tarmac at Eurotunnel, Folkestone, patiently waiting for our train.  It was delayed by three hours.

We had set off in the morning at a time that allowed for a two hour delay on the road and sure enough, one of those was taken up when we sat in a queue just north of the Dartford Bridge because protesters of some kind or other were making a nuisance of themselves by climbing the gantries above the road.

Anyway, we still arrived at Eurotunnel an hour early but all trains were delayed.  We like Eurotunnel but when it's very busy things often go wrong and long delays occur.  Having arrived in Calais three hours later than we should, we then arrived chez nous at three in the morning.  The total journey had taken eighteen hours.  Daisy and Hugo travelled really well considering, although by two am Daisy had clearly had enough of being cooped up in her cage and vocalised her feelings for the last hour!

Other travellers who had tickets for trains later in the day faced even longer delays of up to six hours.  I'm fairly sure the reason was as usual that all trains were fully booked but no doubt some of it was down to the effects of Brexit.

There were even worse queues at Dover, where those trying to get a ferry to France at the end of the school year faced many hours of delays and the resulting misery that goes with it.  I thought it typical of the person who is likely to be our next Prime Minister, Liz Truss, to blame the French!

The truth is that the French are obliged to carry out extra checks at UK ports for each passenger now that we are no longer in the EU.  They have to check the passport expiry date, check for how long each person has already spent in Europe because we are not in the Schengen area and stamp every one on exit.  Then a number of vehicles are picked out of line randomly to check for the goods that we are no longer allowed to take into France, such as meat, dairy, plants, furniture, tools - all of which people like us with second homes in France could take freely before we left the EU.  To suggest that the French were simply being bolshy and could have opted to ignore all these checks is ludicrous.  Maybe if a different Brexit deal had been negotiated things could have been different, but the problem only affects the little people so why bother?  (By little people I don't mean those who are vertically challenged but people like us, the ordinary, everyday tax paying citizens.)

In pre-Brexit days we would pass through the French customs with just a wave of our passports, barely even having to stop the car.  Those days are gone.  It's called the end of freedom of movement, which so many Leave voters were so keen on.  Unfortunately it works both ways but the Leave campaigners  told us it wouldn't make any difference to us at all, not to travel, trade or anything.

In addition, the French had some time ago offered to man several more customs booths at Dover in order to cope at times of heavy demand but the government didn't see the need for it and was not prepared to stump up the £30 million pound investment in order to do it.  Why would they?  It would only affect the little people! 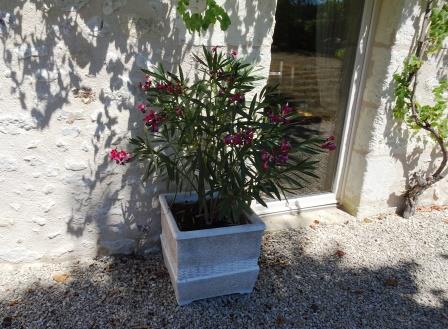 Our garden and pots of plants had been well looked after by our little army of plant waterers while we were away but they are in danger of becoming frazzled again.  Our oleander likes the heat but was noticeably grateful for a good drink of water yesterday. 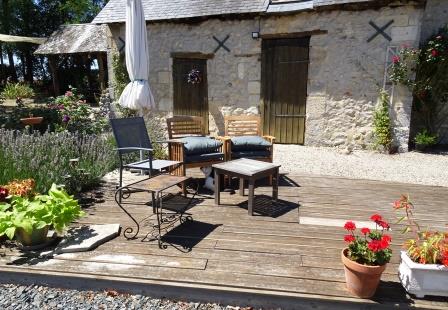 The plants on the decking are in greatest danger as they are in full sun for more hours of the day.  We are now not allowed to use tap water for watering but luckily our thousand litre water cube is still over three quarters full.  All we have to do is trudge up and down the drive to fill watering cans! 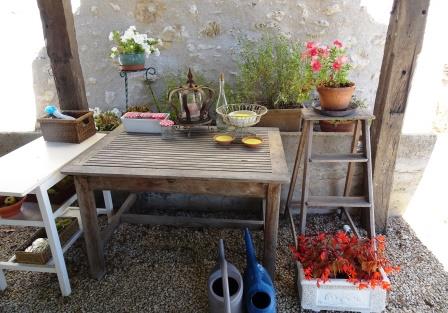 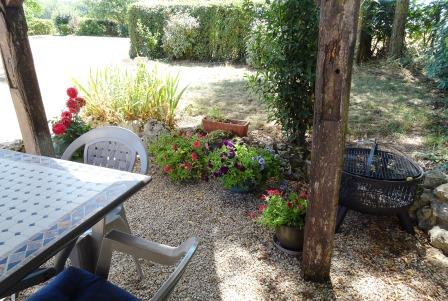 We have moved some of the plants that were struggling the most into the shade of the picnic shelter so hopefully they will survive. 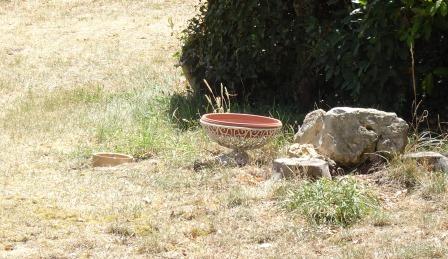 I have however kept our bird baths topped up with fresh water.  We keep a few pots and saucers dotted around the garden so the birds and insects can have a drink or a bath when no other water is available for them. 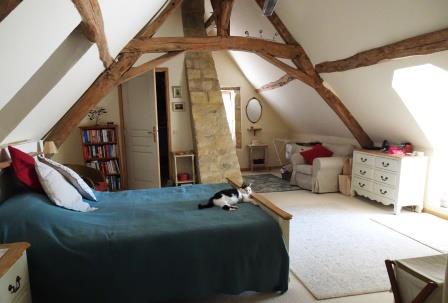 We don't see much of Daisy during the day.  She finds somewhere cooler to hang out but never far away from where we are.  The bedroom is however, not cool at all and we are at a crossroads in wondering what to do about it. 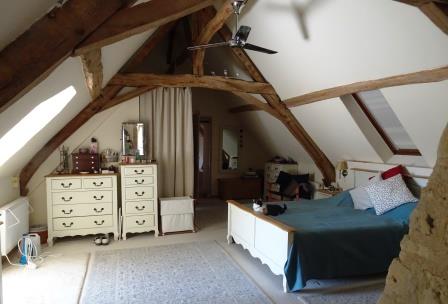 If money was no object, we would have the roof taken off and put back with much better insulation between the tiles and the plasterboard.  The heat seems to be more of a problem in this end of the building and we're not sure if it's because the room is bigger so more difficult to keep cool - and also to keep warm in cold weather - or if the insulation is better at the other end of the house.  The upstairs (grenier or loft) was renovated in two stages.  We can see this from the file of old photos passed on by the previous owners; the kitchen end first, so it’s likely that different materials were used.  The lovely exposed framework of the roof structure in the main bedroom is beautiful but creates such a vast space of air to be cooled down or warmed up.
The cheaper solution is to install air conditioning, something we have talked about for a few years but never got round to it.  This year we were supposed to be getting a quote from someone via the builder who mended our barn door but it never materialised.  We have someone else coming to look at it tomorrow.  The advantage of air conditioning units is that they can also double up as heaters in winter.
Something else we have talked about is having a ceiling put in at the level of the cross beam.  The theory is that the room space would be reduced so less volume to either cool or heat.  We could also cram more insulation above the ceiling, although there would still be plenty of heat passing from the sloping part of the roof.  And it would also be very expensive.
Decisions, decisions. 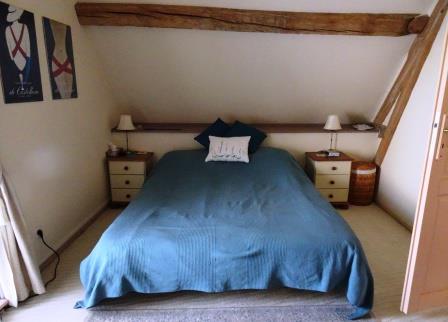 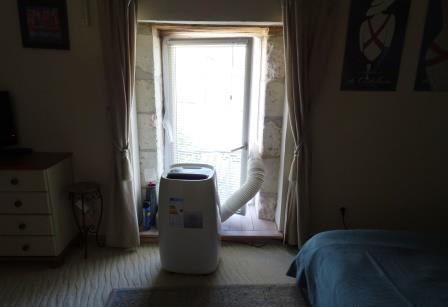 In the short term we have moved into the guest bedroom, which also has a high ceiling up to the apex of the roof but is much, much smaller so our little portable air conditioning unit actually makes a big difference. 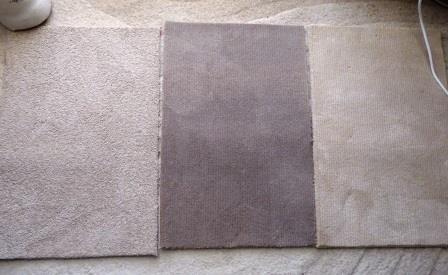 Another decision we are grappling with is what to do about flooring.  Both bedrooms have cream coloured carpet which has been down since long before we bought the house and, with all the various work projects that have taken place, bear rather too many grubbly battle scars.  We simply cannot get them clean any more.  We have put rugs here and there to hid the worst of the dirty marks but the time has come (the walrus said) for us to do something about it.
Ideally we would like to put down wooden click flooring but both floors, especially in the big bedroom, are too undulating.  The floors don't just slope, they go up and down all over the place but levelling them would be another expensive and disruptive job.
Hence in the heat of yesterday afternoon we, like plenty of other people, sought refuge in various air conditioned shops and looked at carpet.  Replacing the carpet with new would be the least expensive way of having nice clean floors again and a nice young lady from a store in Tours is coming on Monday to measure up for the one we have chosen, which happens to be the one on the left.  We thought the one in the middle was the right one while we were in the shop but looking at the sample back home feel it would make the room too dark, even though it might be more "pet friendly". 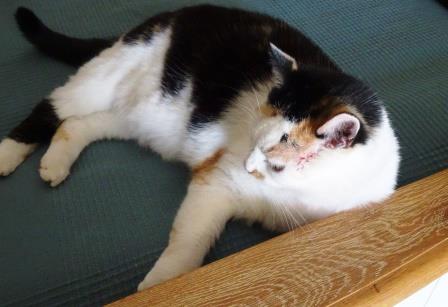 Speaking of pets, Daisy is recovering well from the operation to remove a huge lump from her head.  It was a sarcoma, which the vet described as very invasive even though not life threatening as they don't usually metastasise.  She has a long scar which is gradually healing, although I had to take her back to the vet last week to have some residual bits of the stitching to be removed.  She was not impressed!

Realistically, we are just pleased that we still have her.  Having to have a general anaesthetic twice, once for the biopsy then for the removal, was very worrying but she came home safe and sound.  She has outlived her parents and siblings by several years already and is getting on a bit at eight years old herself.  She's a bit more clingy and less adventurous than she used to be but that means we can enjoy her company more often.  She still does a sterling job in keeping the mice at bay!