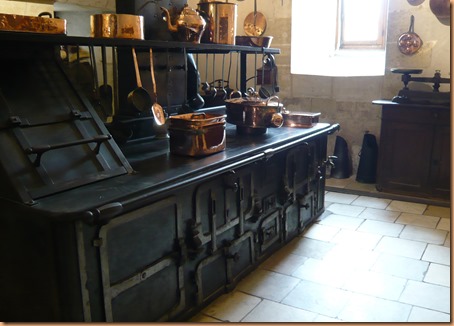 Ever since I was a little girl I have loved visiting old houses.  A trip to some nearby stately home in Derbyshire with my parents - Hardwick, Chatsworth or Haddon for example, was a summer treat that I always looked forward to.  Here in Derbyshire we have a good supply of old houses and monuments to visit and I have many happy memories of picnics by the river at Chatsworth or tea in the tea rooms of some other grand old house or other.

For as long as I can remember the best part of any visit for me would be to see the kitchens.  I have no idea why they should fascinate me so much, but they still do. 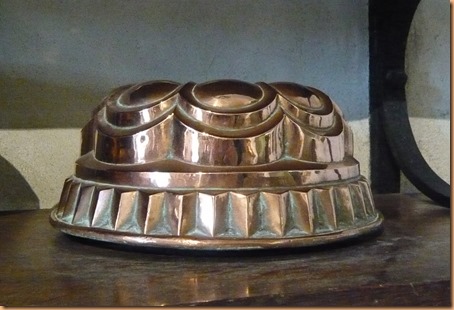 Maybe it’s the sight of the preposterously large ovens and ridiculously shiny copper pans which make kitchen life seem so fascinating compared to how it is in modern times. 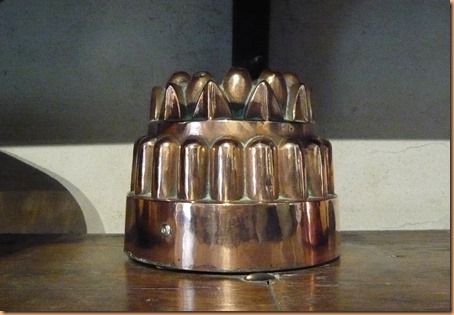 Or maybe too many of the “upstairs, downstairs” kind of TV programmes that I loved watching when I was younger – in fact still do to be honest.  There have been several TV series in the UK recently which have portrayed the reality of kitchen life in these big houses, dispelling any idea that kitchen work was anything other than dangerous hard graft. 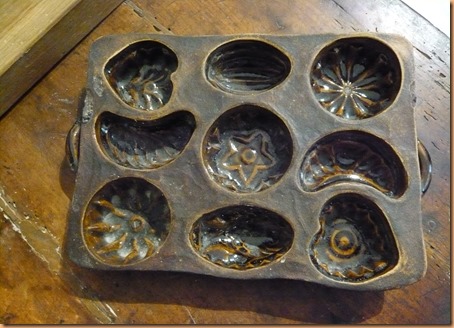 But I still find kitchens fascinating and am disappointed if we visit a château where the kitchen is not part of the tour. 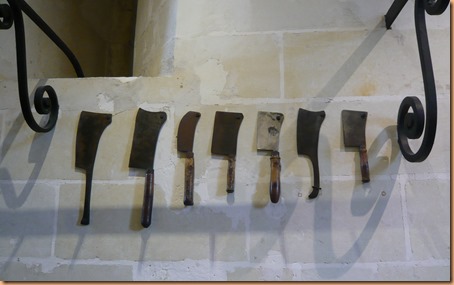 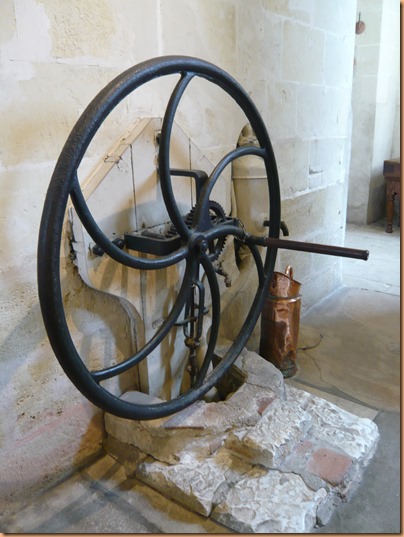 At Chenonceau the kitchens are a delight, with shiny pots and cooking pans and mysterious gadgets aplenty. 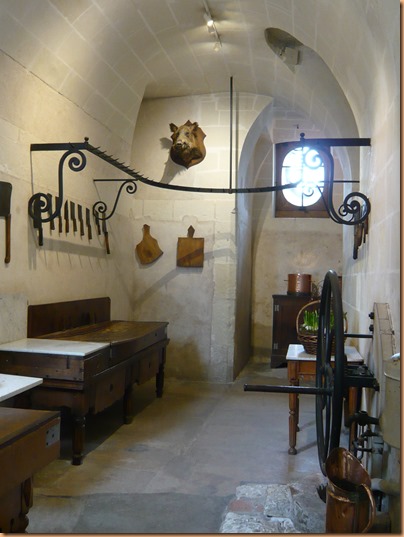 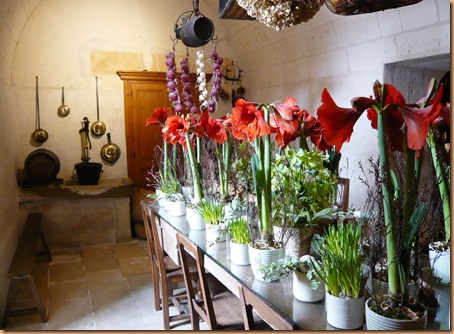 Plenty of things for a person with an overly active imagination and rather romantic fascination for life in “the olden days” to enjoy!

So that’s it for 2017.  A huge thank you to those who have stuck with me in the last couple of years where my blogging seems to have lost direction somewhat.  I can’t promise anything different next year but for me it feels different, our future more or less settled rather than in limbo.  I hope so anyway.

A HAPPY NEW YEAR TO YOU ALL !! 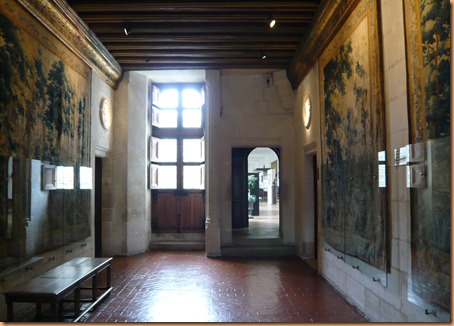 Chenonceau never fails to enthral me with its sheer beauty but never as much as in February this year when there was hardly anybody else there.  To be able to stand back and look at its treasures in proper perspective without dozens of other people swirling about in front of me was a total joy. 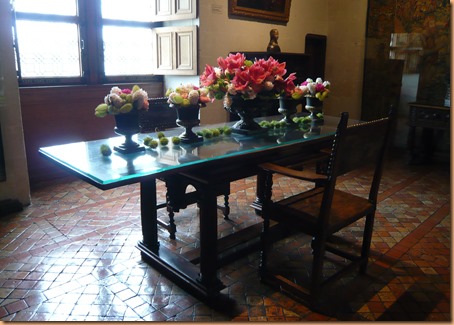 Of all the châteaux we have visited over the years, Chenonceau always has the best flower arrangements.  They are quite breathtaking and must take hours and a lot of skill to produce.  Even in the middle of February the flowers were fresh and the arrangements in good condition.  And of course with nobody much about I could see them in their full glory instead of only bits at a time. 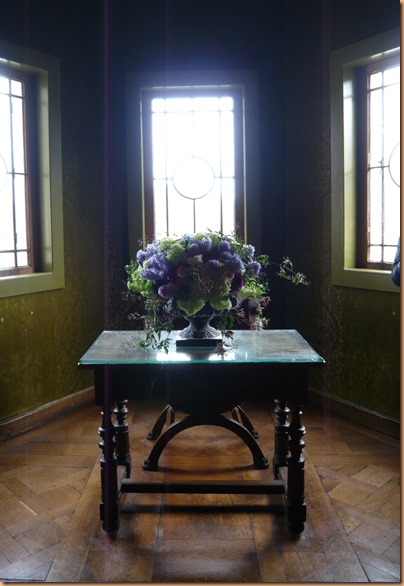 Hyacinths featured greatly in many of the displays, filling the rooms with their glorious perfume. 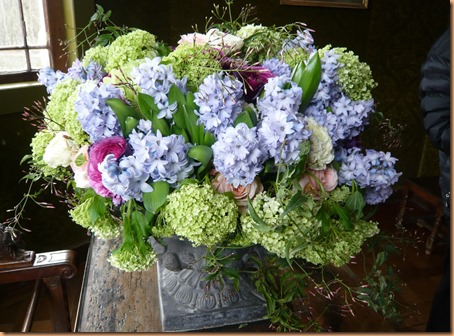 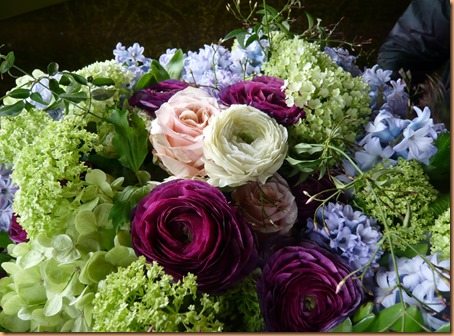 I do admire people who can produce a nice flower arrangement, being a put them in the vase and hope for the best kind of flower arranger myself.  One day I will take myself off on a course to learn how to do it properly and make it look effortless, when I have the time. 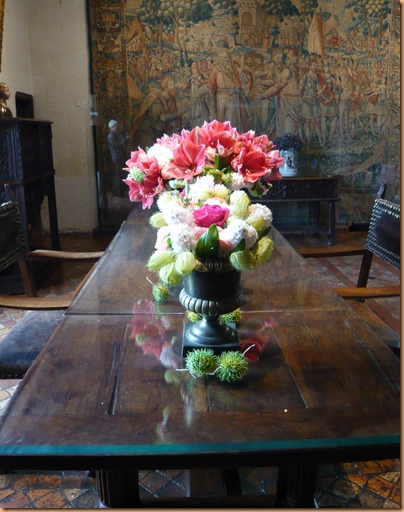 Time being something I seem to have a lot of at the moment, but not able to do anything very useful with it, still being quite poorly with this horrible cold/flu.  Sitting in front of the computer and tinkering with pictures is about all I have had the energy to do since I gave in to the illness and went to bed on Christmas afternoon. Each day I try to do a few easy chores, like clear the table or stack the dishwasher, but it’s exhausting.  I’m pretty fed up with it. 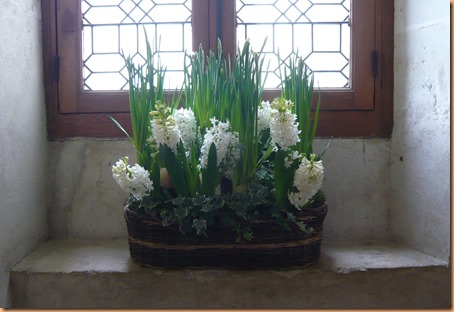 However, I’m consoling myself with the fact that at least I am retired.  If this had happened whilst I was working, having to spend a precious holiday being ill instead of enjoying myself, I would have been much more upset about it. 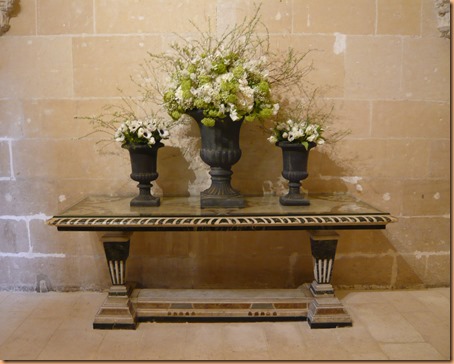 At least now that we’re both retired we can just write off the time, batten down the hatches until we’re better (Nick has had a milder version of it, lingering slightly) and just pick up the decorating and other stuff where we left off when we feel up to it.  That is one of the advantages of being retired, I think, knowing that if today doesn’t work out as planned, there’s always tomorrow. 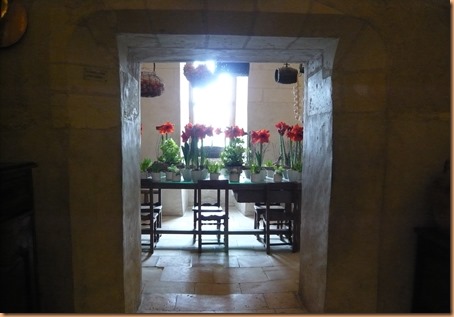 It snowed again here today, putting the kibosh on any plans we might have had to go anywhere.  We often get a bit of snow in Derbyshire between Christmas and New Year and being stuck in the house gives me the time to do a bit of sorting out of the year’s photos, something I actually look forward to.  It’s good to be reminded of the wonderful things we have done during the year and to think of how we will enjoy doing it all again next year!

more of the same Chateaux, Flowers, Life in the UK, Photo gallery

Looking through the hundreds of photos of places and events I took this year I realise that we did an awful lot of things that I never posted about.  Now’s the time to do something about that. 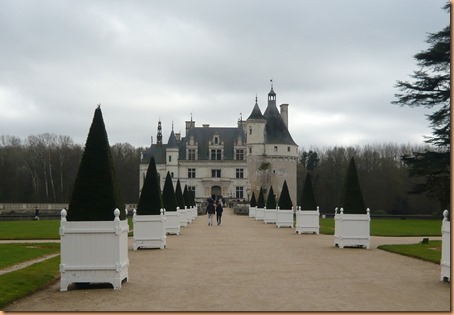 There are some places in the Loire that I never tire of and the château at Chenonceau is one of them.  Not that I visit it that often - just knowing that it’s only an hour away is enough, and that I can, if I want, pop over and have a look round, feast my eyes on it, whenever I like. 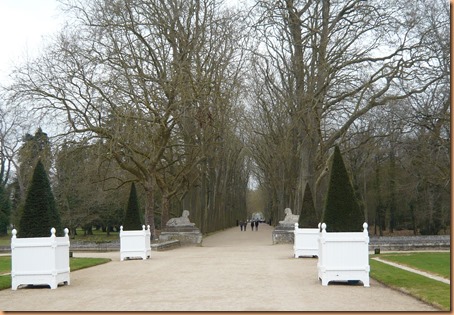 My last visit was in February this year.  So many châteaux are closed over the winter but not Chenonceau, which is open all year round and the great advantage is that in February there is hardly anyone else there. 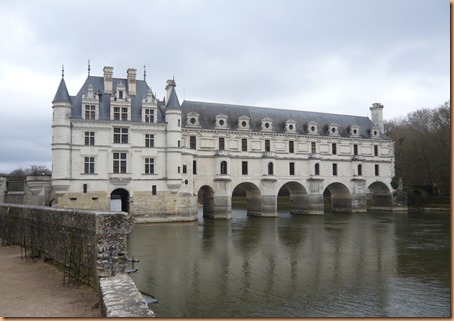 I was able to take dozens of pictures completely uncluttered by human beings.  For most of the year the place is heaving with tourists but on a cold grey Tuesday afternoon in February I had the place almost to myself. 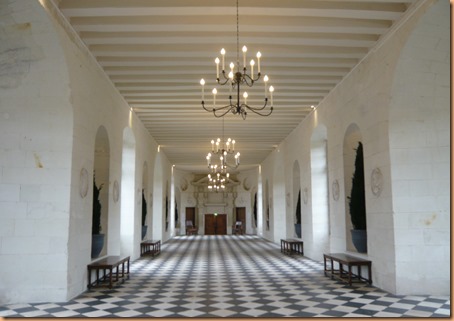 The long gallery that is the bridge over the river is usually full of people but on this day it was deserted. 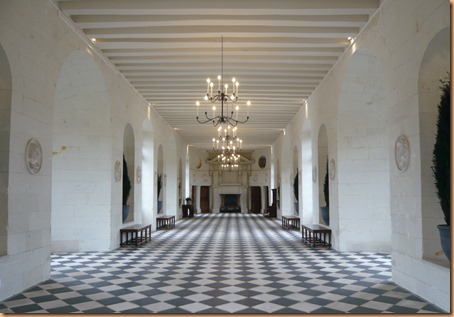 I was able to walk from one end to the other and back again without meeting another person. 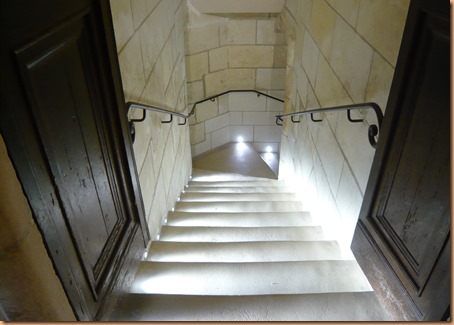 It was weird, actually, being able to wander around unhindered by hordes of people.  I have always loved visiting old castles and houses and been fascinated by the stories behind them.  Being almost alone in the place made the experience even more magical. 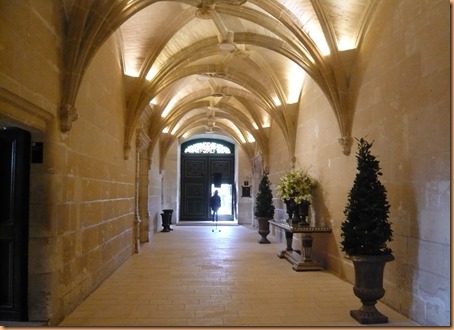 Another advantage of visiting in winter is that any stray people that might appear in photos are dressed sombrely in winter coats, not in gaudy summer clothes, which nearly always spoil a photo, especially if too much flesh is on view. 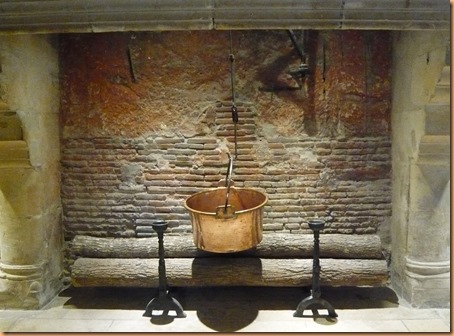 I find it hard to say which part of Chenonceau I like the best, it’s probably a choice between the kitchen, the long gallery and the fabulous flower arrangements that are everywhere.  My photo tour will continue ………