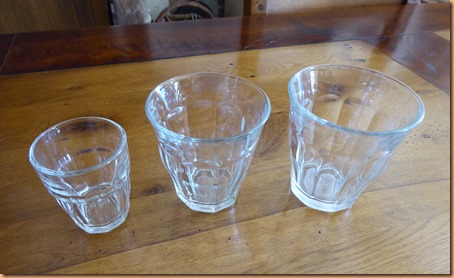 Picardie is the name of a French tumbler.  This glass has been around for decades and is the classic design that we are all familiar with, found everywhere in France.  You might get your orange juice served in one in smart hotel breakfast rooms, water alongside your menu du jour in the local café or your rosé wine at the village brocante.  They are now made by Duralex in the Loire region.

The glasses on the right are the ones we bought when staying in a couple of different gîtes where there was nothing sensible to drink a glass of water or juice from.  You can get them in most supermarkets quite cheaply.  The one on the left is from a “set” of twelve shot glasses to the same design that we got at a brocante earlier this year for 2€ the lot. 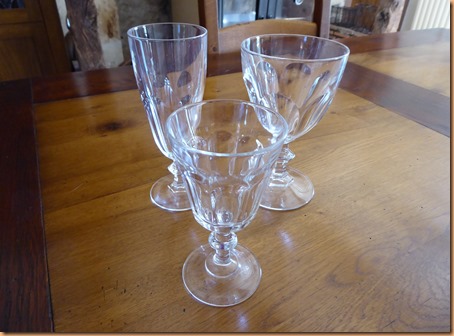 You can get the same kind of design in stemmed glasses and we got all of these for next to nothing at different times at various local brocantes.  The ones in the front are perfect for sipping a glass of sweet wine.  The flutes make an ordinary glass of fizz seem really special and the larger ones are apparently for “cocktails” – according to the lady who sold me all eight of them at the brocante in Neuilly earlier this year, for the princely sum of 5€. 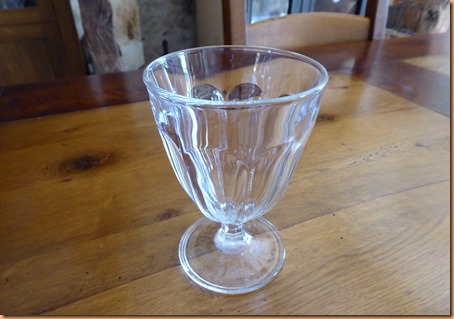 These are our regular daily wine glasses that we bought when staying in yet another gîte where the ones supplied were enormous and very fragile and we were afraid to use them – let alone put them in the dishwasher.  Picardie glasses are very strong and user friendly, eminently dishwasher proof and cheap to replace if you happen to break one. 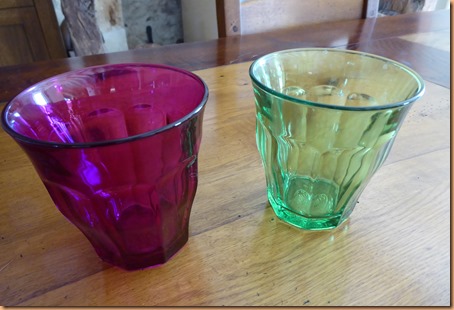 You can now get the tumblers in a fine array of colours.  These were on special offer in the supermarket and I couldn’t resist them to cheer up the dinner table. 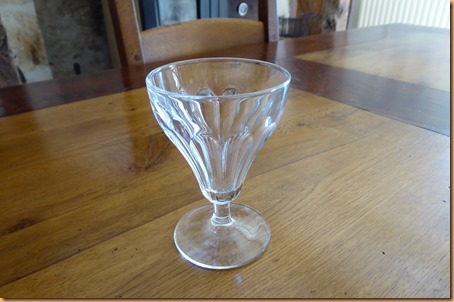 These are a bit different.  They have the same ribs as the traditional Picardie glasses but according to the lady who sold me a set of six at a recent brocante, they date back to the 1940’s, making them vintage glasses in my book.  They are perfect for a small measure of digestif (Southern Comfort being my current favourite).  She sold me a set of six but I spotted that one of them was chipped so that made them a set of five – and she knocked a whole euro off the price, making it 3€ for all of them.  I’m on the lookout for another one to replace it and make the set back up to six. 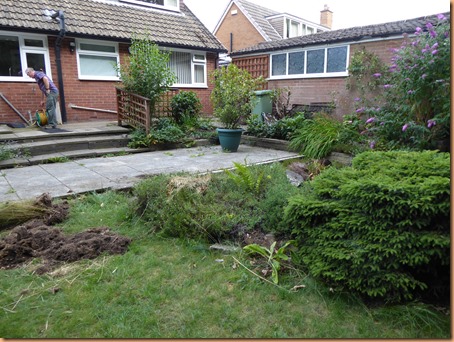 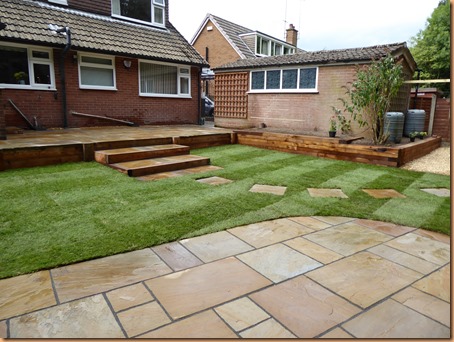 August disappeared in a blur.  We returned to the UK in order to get our back garden “fixed”.  It was a mess of worn out patio tiles, hugely overgrown shrubs, little paths, low crumbling walls and a leaking pond.  We came to the conclusion that it would take us months of work if we tried to sort it out ourselves and in fact hardly any of it was worth saving.  What we needed was help to turn it into a very low maintenance garden so that we could spend our summers in France not worrying about it.  We hired a firm of landscape gardeners and after two weeks of intense building work followed by two weeks of watering, planting and tidying, it is now the garden that we wanted. At last the place feels like home.  All the major work both outside and inside is done and what’s left is down to us – some decorating and a bit of DIY.

On 2nd September we returned to France, our August mission successfully completed. 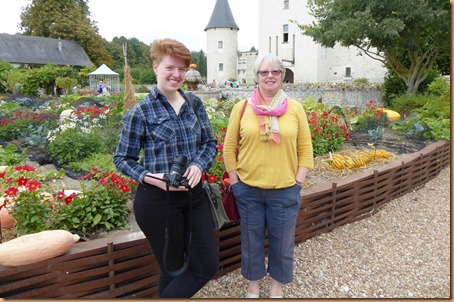 We have had a lot of visitors this year.  Our last visitor was our niece Joanna, who usually comes with her dad (my brother) but was by herself this time.  She travelled to France with us – quite a car full with Joanna, the dog and cat - and the trailer full of all our luggage. 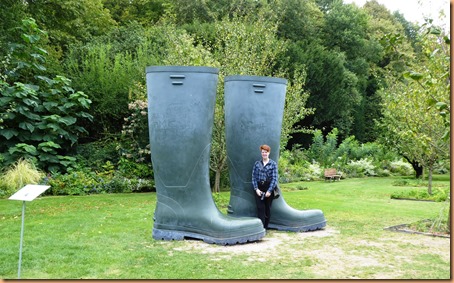 We had a great time showing her round some of our favourite places – above at the château at Rivau. 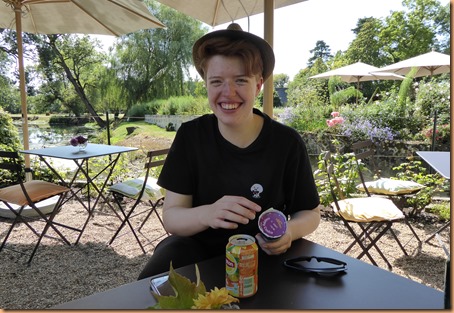 We also took her to the châteaux at Islette, Bouges and Loches, and to many other places.  She was very lucky with the weather which was fantastic for her whole stay, which always makes anybody’s holiday so much more enjoyable. 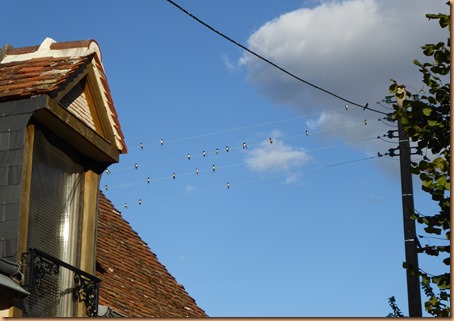 Now our last visitor, like the swallows, has flown.  We did a little calculation and worked out that if you add one day to both sides of the stay of each set of visitors for the getting ready and clearing up afterwards, it comes to seventy days this year.  If you add to that the time that both of us have spent in the UK by ourselves that comes to ninety days.  Which means that since we arrived here at the end of March we have had very little time here together, just the two of us. 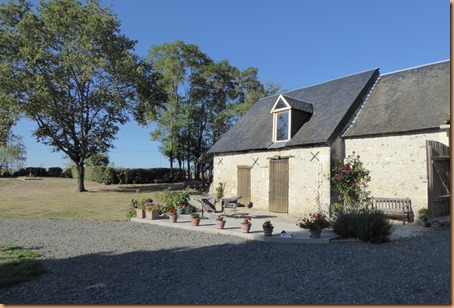 Luckily, it is still summer here. We still have warm, sunny days but with cooler evenings and nights, the perfect combination and the reason that September is probably my favourite month of the year.  It rarely disappoints it’s lovely to have some time and the house to ourselves. 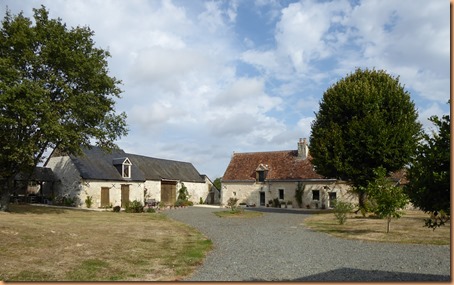 The garden suffered badly in spite of occasional watering during August but a couple of weeks of TLC have brought it back to life and restored a bit of colour.  The grass is still brown, the only green patches being weeds or where Hugo has “watered” it. 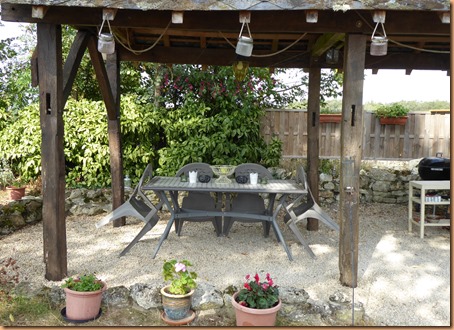 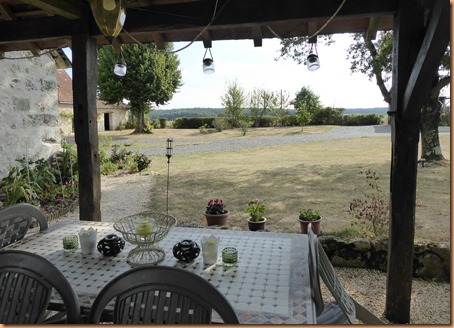 We have eaten outdoors as often as we could, making good use of our picnic shelter which always provides shade at any time of day.  There’s nothing quite like a long, lazy lunch in the sunshine to make you feel completely relaxed. 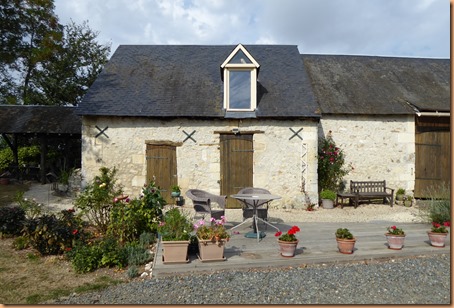 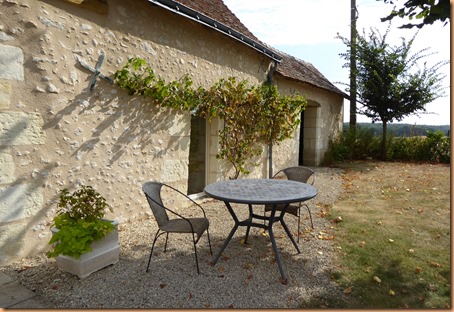 Lazing around is something we have had little time for so far this year so now we’re making the most of it, using all the sitting areas that we have placed around the house.  We can sit in the shade somewhere at all times of day. 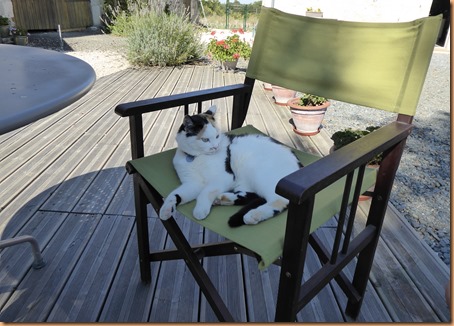 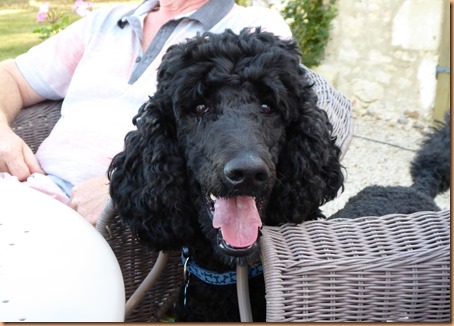 Daisy settled in straight away after her month back in the UK, jumping out of the car as soon as we opened the door and making a quick check of the premises and the wildlife.  Hugo loves it here, having so much more space to run around in and play. 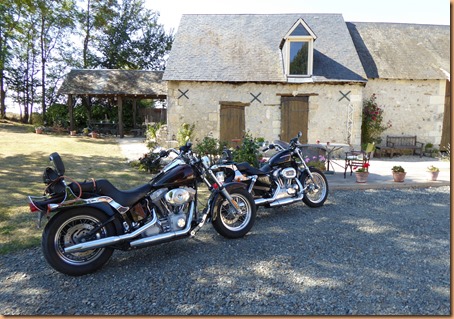 And this week we took the motorcycles out for a lovely long run in the sunshine, stopping for lunch at the little restaurant in St. Flovier, something we have not been able to do for a long while.  We have been too busy to ride them and the restaurant has been full the last three times even though we arrived there just after 12.00pm, holiday makers filling up the tables not taken by the usual clientele.  This time there were just a dozen or so workers taking their lunch break and us.

Life in France is back to normal !!