AN UNEXPECTED BONUS AND CHOCOLATE POISONING 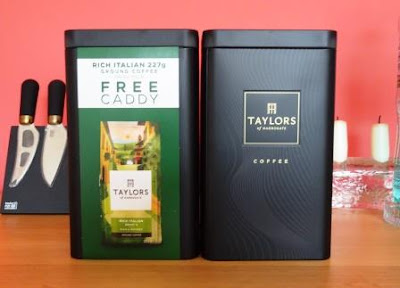 We were absolutely thrilled when, thanks to a tip off from our friend Gaynor, we managed to get a click and collect slot at our nearest Asda supermarket.
When our illustrious leaders recommended that we should all order our shopping on the internet and have it delivered the whole world and his grandmother fired up their laptops and all the delivery or click and collect slots disappeared in nanoseconds.
We have periodically logged on at the recommended time of day, which seems to be anything from just after midnight until just before midnight.  We have been out of pot luck every time until finally, finally, a slot came up with Asda for ten days' hence.  We cracked open another bottle of fizz to celebrate.
The appointed day was yesterday morning.  I spent longer in the shower than normal and took more trouble than for a long time on deciding what to wear.  Oh the joy of a day out!
Off we went, excitement mounting, to a place eight miles away that I haven't been for decades, which is where our nearest Asda is.
It was a good experience.  The young people dealing with the click and collect collections were fabulously cheerful, polite and helpful and all the groceries were excellent.  Even the substitutions.  Well done Asda.  Above all, there was an unexpected bonus.  See first picture.
We had run out of our favourite coffee and were very much looking forward to a fresh supply of two bags and - woo hoo - they both came in these really smart caddies.  Très chic!  My first thought, typically, was "one for here, one for there" and I planned to set one of the caddies aside for when, who knows when, we can return to France. 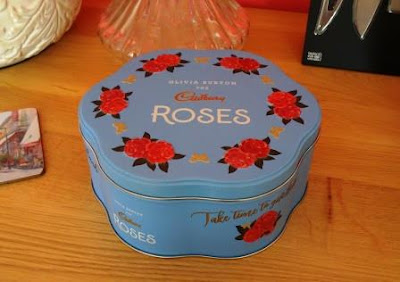 Which brings me to my next point.
The "when can we return to France?" is the one thought that stops me in my tracks, on and off, throughout every day.  I had started to become aimless, achieving very little most days, barely managing to complete the everyday tasks.  While all around us there are people achieving all kinds of things.  Tapestries, paintings, redecorating, rebuilding the house and restoring old vehicles.
The other unexpected bonus is in the second picture.  A Christmas gift packed away and out of sight but rediscovered when searching for the coffee grinder.  (Because we had accidentally bought a bag of coffee beans instead of ground coffee on the previous shop.)  (Shop blindness.)
We didn't find the grinder but we found the chocolates.
So, if you get through this without murdering your spouse or dying of chocolate poisoning, that's all that we need to do.  Oh, and stay away from everyone else.
8 comments:

more of the same Life in the UK, The virus.

UP AND DOWN AND INTERNET SHOPPING. 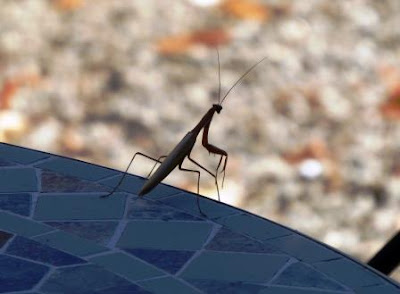 We are like coiled springs.  Or an insect ready to jump.
The weather has been really good in the UK for these first weeks of lockdown.  That definitely makes it much easier to bear, for us anyway.  I'm sure there are people who barely notice the difference, who live pretty much like this normally. 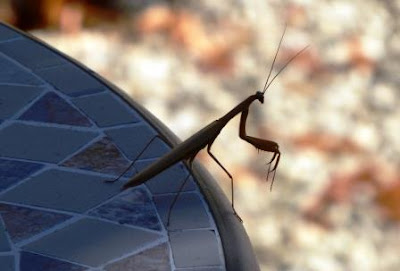 The weather has in fact been exceptionally nice for the time of year.  I can remember freezing Easters in previous years and heavy snowfalls in the middle of April.  This year we have been able to spend a lot of time outdoors, pottering in the garden or sitting in the sunshine, sipping wine and enjoying the garden and the antics of Hugo and Daisy, to pass the time. 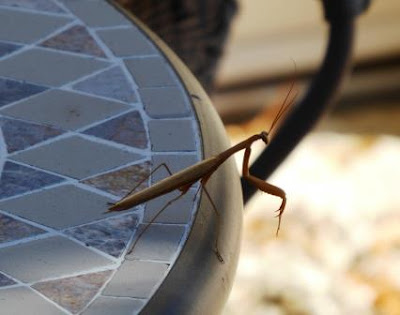 And yet, we are a bit up and down.
Me especially.  I have good days when I just bumble through the day, getting on with little jobs, all of which need doing and which I have never had the time to do before.  Other days I wake up and think it looks like it's going to be another nice day and then I remember.
All my summer clothes are in France, as well as my lightweight shoes, sandals and sunhats.  On top of that the clothes shops are all closed, so I have had to resort to internet shopping.  What a pain that is.  Why on earth people should prefer it to actual shopping in real shops is a mystery to me.
After spending hours looking through websites that were difficult to navigate, being bombarded with advertising, grappling with security details and passwords and accepting cookies, I finally managed to order some things that would keep me going for the summer.  Then there's the waiting for them to arrive, the inevitable disappointment, the trying on and the sending back.  Most of the stuff I would not have given a second look if I had seen it in a real shop.
A classic example was a pair of cropped trousers.  I already own several pairs of cotton or linen lightweight comfortable cropped trousers that are in the wardrobe in France.  I live in them all summer so I ordered online something that looked similar.  £30 plus nearly £5 postage.  In the picture on the web page they look like nice, smartish, comfy trousers.  The reality is that they're made of a jersey fabric more like pyjama bottoms.  Thirty quid for a pair of pyjama bottoms is not my idea of good value.
I've decided not to bother with new sandals.  The likelihood of a pair that fits plopping through the letterbox is slim to negligible so I'll manage with my slippers.  It's not as if I'm going anywhere in them!
There has been much speculation about what the world will be like "after coronavirus".  The inference is that the already struggling high street will be a thing of the past.  What a shame.  I would much rather potter round the shops, seeing and feeling things before I buy, enjoying a cup of tea and a slice of cake or even a nice lunch half way round, than do internet shopping.  It simply does not compare!
8 comments:

more of the same Life in the UK, Shopping, The virus., Thoughts 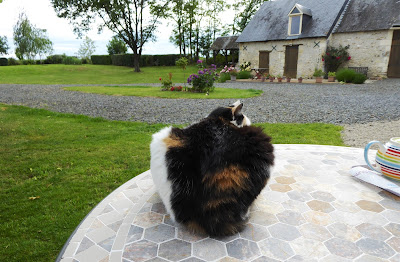 In our French garden last year.
It all seems very odd.
We wait and wait some more, for the signal that the worst is behind us, that we can make plans to move forward with our lives.  It feels like we're freewheeling. 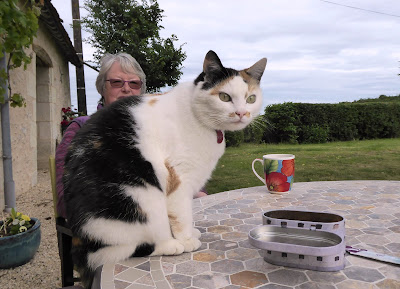 Dreamie time.
Our UK house is a smallish 1960's old folks' bungalow, almost fully renovated*, and it has a nice but tiny garden to sit in while we while away the time.  However, the view of the back of a 1960's bungalow, however nice, does not compare to the view across the fields to the forests all around our house in France.  I try not to think about that too much. Hugo and Daisy seem ok.  Hugo is happy anywhere as long as he's with us.  We play football and "toss the cushion" in the garden and he's in heaven.  We can't kick the ball or toss the cushion very far because the garden is so small but he still enjoys it.
Daisy has had a few problems.  A new family moved into a house not far away and brought with them their three cats.  There have been a few tussles.  Daisy is not used to other cats as there are currently none near to us in France.
One day while I was out Nick took Hugo for a walk and on his return the tabby was in the kitchen, sitting on the worktop, having eaten all Daisy's food.  Daisy was on top of the kitchen cupboards.
He ejected the cat firmly but kindly, pointing out that its presence was unwelcome as this is Daisy's house.  We solved the problem of the other cats entering via Daisy's cat flap by buying one with a microchip sensor.  I was sceptical but it works perfectly and was £50 very well spent. 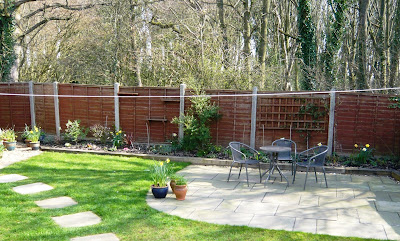 Our UK garden, perfect for leaving unattended over the summer.
Behind the bungalow there is a wood.  There are paths through the wood that are well used by dog walkers and part of one path runs quite close to our fence.  Nick put some steps on the fence so that Daisy could sit and peer over at passers by unnoticed. 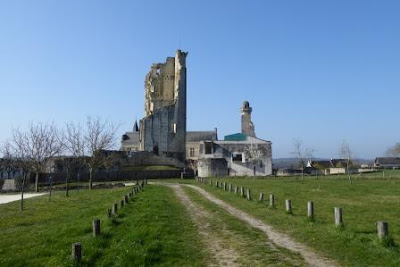 The start of our favourite walk around the château.
I was thinking the other day, not only how lucky we are to have a nice little garden to sit in and wait for the all clear, but also how important the ordinary, mundane things in life can be.  Didn't we all take for granted the ability to just pop to the shops whenever we wanted, or to call in on friends or go out for lunch*?  While others are busy fighting for their lives, fighting to save lives or just worrying about loved ones we feel we just have to do the right thing, stay home as much as possible and sit it out.  And dream about when we can next take Hugo for his favourite walk around the château.
Mind you, the one way system employed by our local Tesco to keep people apart inside the store is simply wonderful.  I'd be very happy if they continued with that, it's so incredibly civilised!
*Update:  the renovation of the upstairs bathroom was abandoned before we had really got started due to lack of materials.  Having bought everything we thought we should need it turns out we are short of things necessary for the job that we now can't get anywhere.
One of our local pubs is doing take away dinners.  Tonight we're having stuffed mushrooms, pork pasta bake and sherry trifle, the first meal we haven't cooked for ourselves for a month!  I'm so looking forward to it!
6 comments:

more of the same Daisy, Hugo, Life in the UK, The virus. 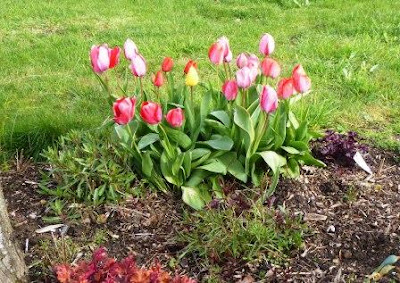 A neighbour that we only bump into a few times a year stopped for a few words from across the road.  We were both out walking our dogs for the permitted one hour per day.  Luckily because there are two of us and one dog he gets two walks a day.  She has two dogs and has to walk them both together for just one walk a day. 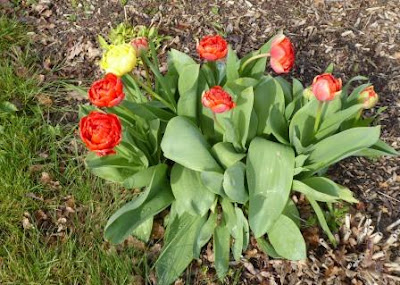 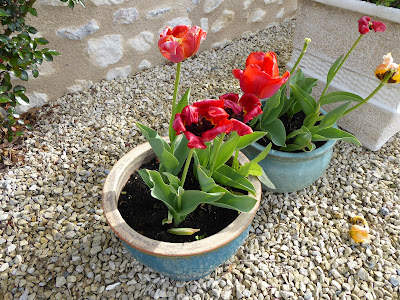 She asked if we were marooned here in the UK instead of going to France and did we miss it. 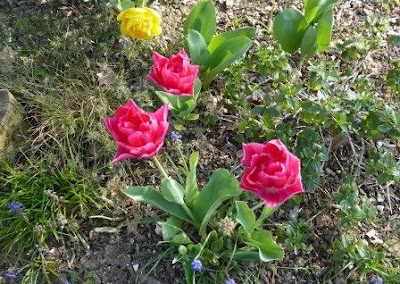 I said that the thing I miss most at this time of year is the tulips.
Tulips are my favourite flower and we have loads planted in our French garden.  Here in the UK we have just a few tulips in pots.  Why would we plant tulips here when we're not usually here ourselves to see them?  These pictures were taken chez nous on this day last year and all our tulips were blooming fabulously.  The daffodils had already finished.  Here we still have the daffodils.  At least we have those.
This will be the first Easter that we have not spent in France since 1995.  That's 25 years.  Still, if we keep our heads down and stay indoors we might make it to France later in the year.
2 comments: