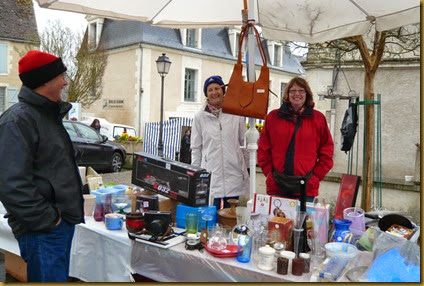 We continue the process of sorting and packing.  We took some of our cast offs to France with us at Easter and put them on our stall at the village vide grenier.

We shared three tables with our friends Gail and Chris, Elizabeth and her daughter Jane.  At 7am the weather did not look promising and by noon it was chucking it down, so we packed up and went for lunch instead, as did most of the other stall holders.  Even so, we somehow managed to sell over 90€ worth of stuff, all unwanted items of dubious value. 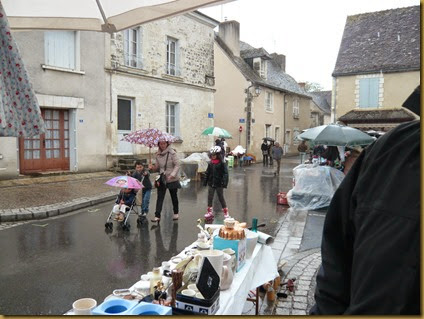 It was fascinating to see what sold and what was left.  The tasty antique bits and bobs mostly went – the binoculars, and old compass, a horn penny whistle, a pair of old rimless spectacles in their original case.  Also some of our pottery items - plant holders and a large owl ornament with the wing glued back on in two places.  We sold most of our unwanted DVD’s, a box of meccano bits and a box of old motorcycle rally patches and badges.  We sold most things for one or two euros but it added up.

Back home we have found it difficult to know how to dispose of some of our stuff.  In the garage we discovered an old casement clock lying on its back on a shelf.  I remember buying this clock from an antique shop near to Bamburgh Castle in May 1972, for £26.  Once I got it home I didn’t really like it and it has never been on display in this house.  By now it was in a desperately poor condition, the paint on the face had peeled off and clogged up the inside of the clock, bits of its frame were broken off and the key and pendulum were missing.

So I printed out a sign which said “restoration project, free, help yourself”, sellotaped it to the front of the clock and propped it up by the gate on the grass verge.  Ten minutes later it was gone!

We decided to be ruthless with our collection of LP records.  Nick sorted them into alphabetical order to make it easier and out of a hundred and fifty  we picked out about thirty to keep.  The rest we put into a big box, took them to an antique shop in Alfreton and the owner gave us £20 for them. When we were deciding which ones to let go I hesitated over my collection of blues LP’s.  I probably haven’t listened to them for over thirty years but they were a big part of my life at one time.  In my early teens, when my friends were all dancing to Herman’s Hermits and Manfred Mann, I somehow got interested in the blues.  I fished out eight records to keep and twice very nearly put them back in the box.  Once we got back from the antique shop with our £20, I decided to put all eight up for auction on Ebay as a collection, starting at 99p.  They sold for £83.

The biggest task has been sorting out the garage.  Last week we strapped an old engine hoist – a kind of tripod constructed from metal poles the size of scaffolding – to the roof of the car along with an broken metal shelf unit and set off to the tip for our second visit of the day.  We parked up next to a man who was unloading sacks of garden waste from a trailer.

“Would you mind if I had that?” he said, pointing to the hoist.  “It might come in handy.”