In July last year we paid a second visit to Palluau-sur-Indre, a village with a lovely privately owned château – I wrote about it first in 2010 here. 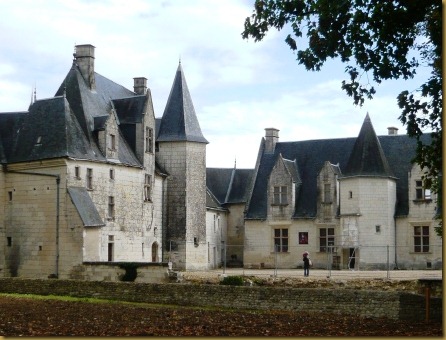 The château had been sold in (I believe) 2010 and the new owner was carrying out major improvements and opening it for visitors.  As it happened, we turned up only a couple of weeks after it had re-opened in 2011.  You can read more about the history of the château here. 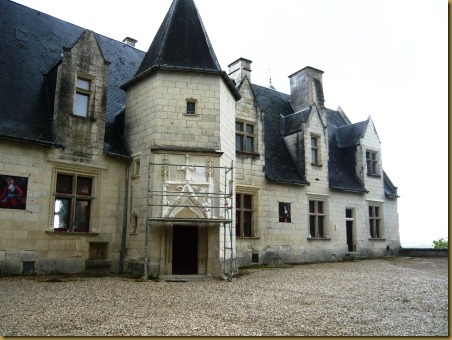 There was a modest entrance fee and we could see that things were not completely organised yet but in we went, dying to have a closer look in the courtyard and hopefully inside as well. 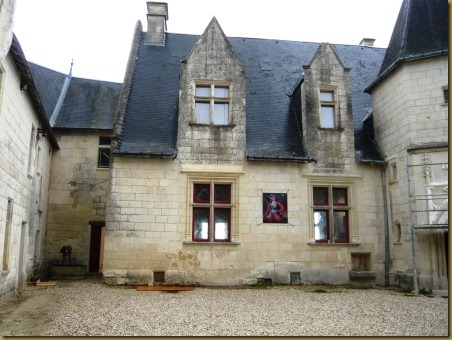 Unfortunately, we dropped a clanger and ended up on a tour guidée, the last one of the day. 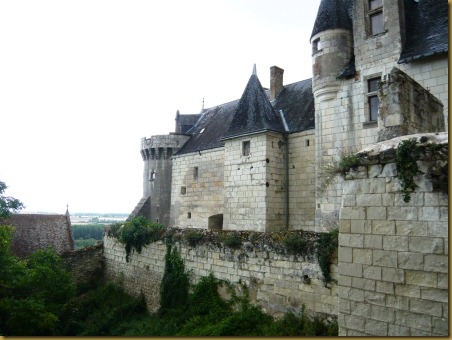 We have a general rule that we don’t do guided tours, only those where you can wander round freely at your own pace, the tour libre.  This is because our French is not good enough to keep up with most of the tour guides.

If they are aware they have non-French speakers in the group, some guides will make an effort to speak more slowly and clearly, or even repeat some of the information in English at the end of each section.  This is always most helpful and very much appreciated.

However, we have endured many a miserable hour trapped inside a château, having been locked into the room with the rest of the group, well out of our depth in terms of understanding anything.  The guide will open the door with a key, herd all the visitors in and lock the door again so no-one can escape!! 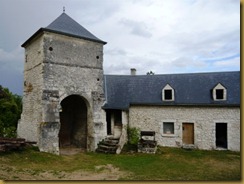 Unfortunately, on this day the lady who meets and greets visitors led us briskly towards the little chapel where a tour was already under way and we were committed! 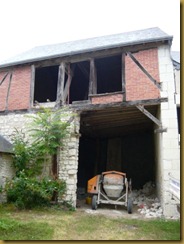 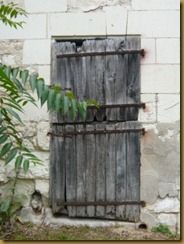 She assured us that the guide spoke good English so we would be in good hands. 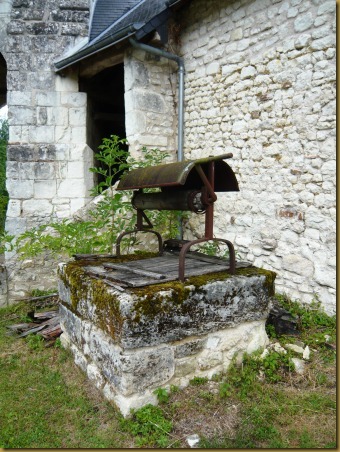 Well, if he spoke any English at all he certainly didn’t try while we were there! 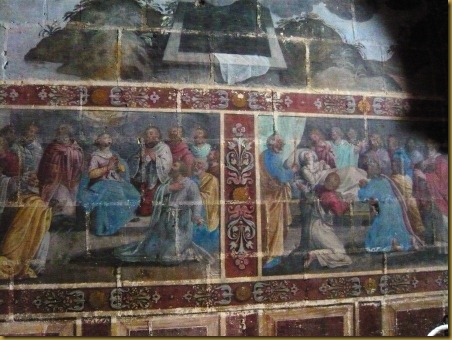 The walls of the chapel were painted with a beautiful fresco, depicting the story of the nativity and the life of Christ in chronological order.  After spending thirty minutes listening to the guide explain every brushstroke in great detail we were losing the will to live and whilst his back was momentarily turned, we made our escape.  We couldn’t face having to struggle our way through the rest of the tour. 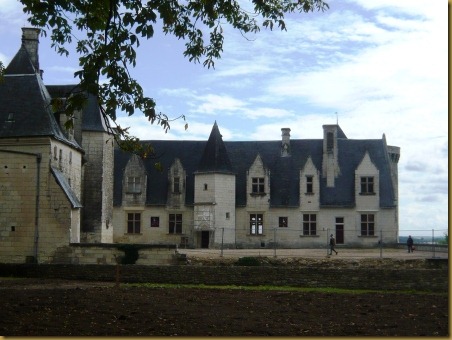 We wandered around the courtyard and enjoyed the beauty of the place and the peace and quiet of its lovely setting but we were disappointed we had lost out on the opportunity to see inside the château.  It’s a shame, because the inside looked from the outside as though it would be really interesting.

In France you can get really nice chips.  Lovely, skinny crispy chips, slightly salted.  If I haven’t had chips by the end of a week in France I start to get chip deprivation syndrome.  Which is strange, because I rarely eat chips at home in the UK. 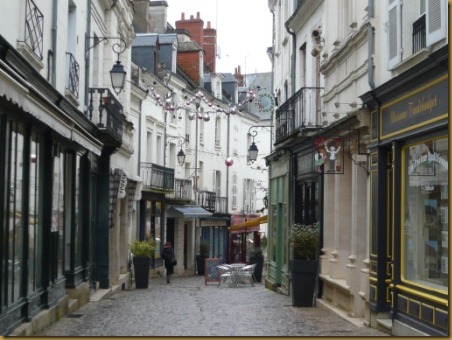 Such was the case on New Year’s Eve.  We were looking forward to a nice dinner with our friends Chris and Gail in the evening so we went to Loches to catch the last hour or so of the market and grab a light lunch.  What I really wanted was chips. 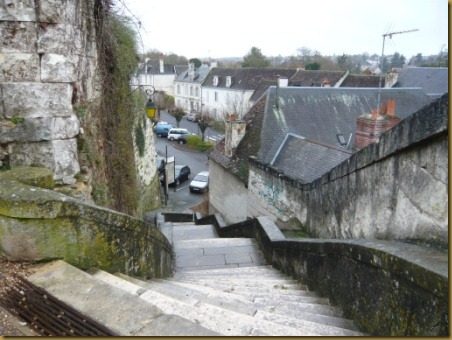 A stairway to heaven the château lunch.

After a browse round the market on what was really quite a dull and dismal day, we went in search of lunch.  Lots of restaurants were closed for annual holidays and we really didn’t fancy the menu at most of the ones that were open.  Then we spotted this place. 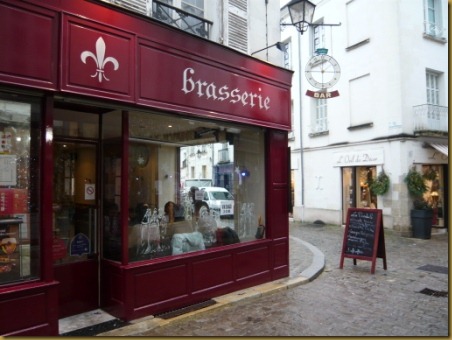 An oasis in a desert of closed or fancy restaurants.

It had a board outside advertising various snacks.  One of them was hamburger and chips.  Another was a “Texan plate” which included “oeufs en plat”.  As well as chips, the French do fried eggs really well. 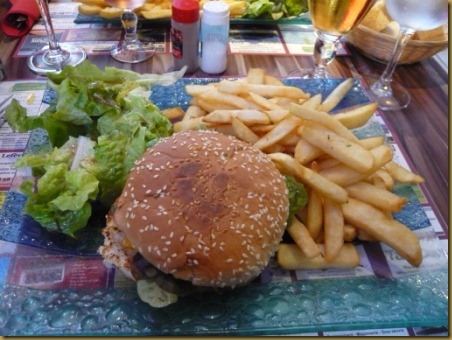 So in we went and Nick ordered hamburger and chips.  I politely asked the waitress if it might be at all possible just to have oeufs en plat avec frites.  She thought it would but said she would check with the chef, who happened to be sitting at the next table enjoying a break.  “Oui, tout est possible!”  was the reply. 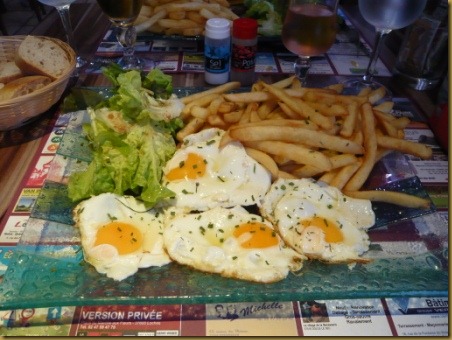 A little bit of heaven on a plate.

She asked me if I wanted three or four eggs.  I was thinking of two but agreed on three.  In the end she brought me four because they were small eggs.

I have eaten “oeufs en plat” all over France and never yet been disappointed.  One may argue that it is a dish that is difficult to get wrong but I would disagree – under or over-cooked eggs are not nice, no matter how good the chips.

These were perfect and exactly what I needed.  A light lunch…….until they brought the obligatory dessert of apple crumble afterwards……oh well, it’s only New Year once a year !! 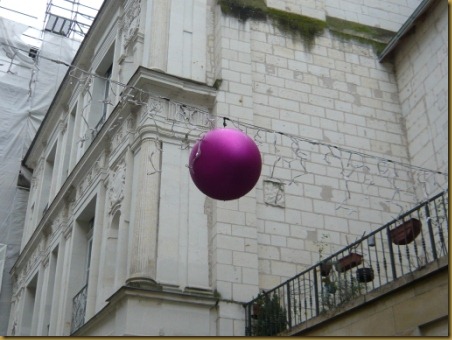 There is no reason to put this picture in other than I really like pink. 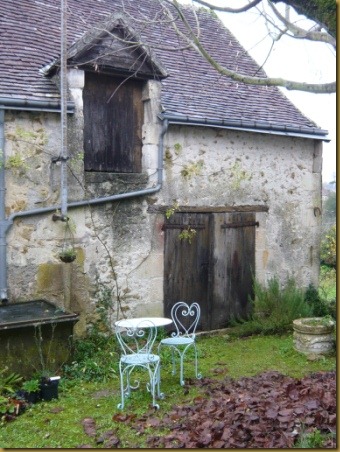 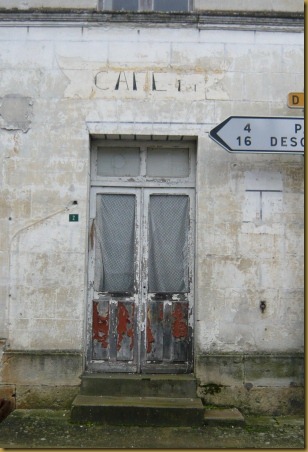 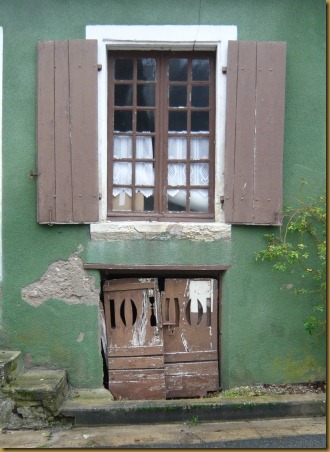 Difficult to tell.  You can never be sure.

All were photographed at Ferrière-Larçon on New Year’s Eve.

We were in Le Grand-Pressigny for a week after Christmas and the weather was most peculiar. 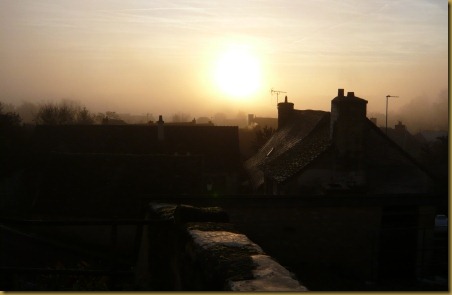 Sunrise over Le Grand-Pressigny on a misty morning.

When we set off from home in the UK at 4.30 am on Boxing Day it was incredibly mild: 13½°C.  This is in stark contrast to last year when we had temperatures below freezing in the UK and barely getting above freezing for most of the week.

This time we had fine weather and mild temperatures all the way to the Loire.  When we arrived chez nous, Nicole had put the heaters on low and had laid the fire for us but the house did not have that dense chill that we normally get when we have been away for a few weeks at this time of year.  Boxing Day had been a gloriously mild and sunny day in the village, apparently.

The next morning it was still mild but it was very misty.  Then it warmed up and we had a lovely fine day. 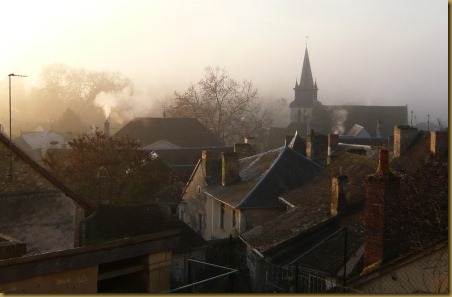 The early morning mist gave way to a beautiful fine and sunny day. 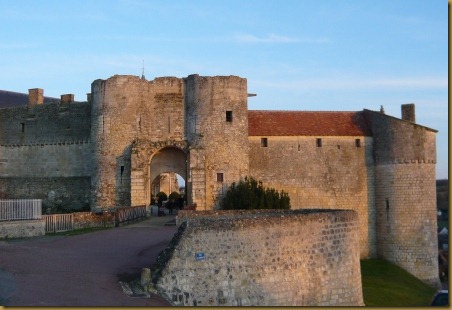 The château looked beautiful and was open for business as usual in the early part of the week. 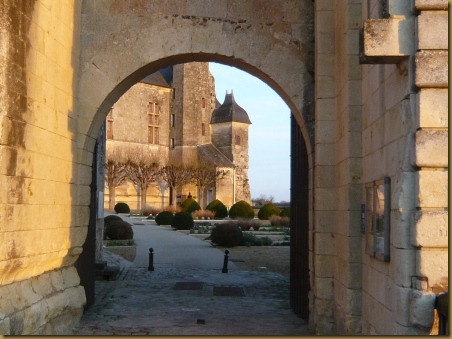 As the week went by the weather changed a lot.  We had a couple of frosty mornings, then it warmed up again and gave way to grey drizzle for most of the time we were there. 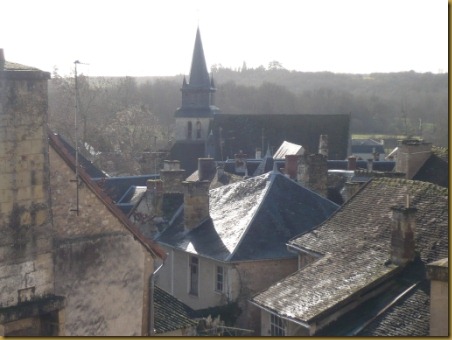 Drizzly weather and wet rooftops in the middle of the week.

This was disappointing.  We really look forward to the blue skies, frosty nights and log fires that we normally get on our winter break. 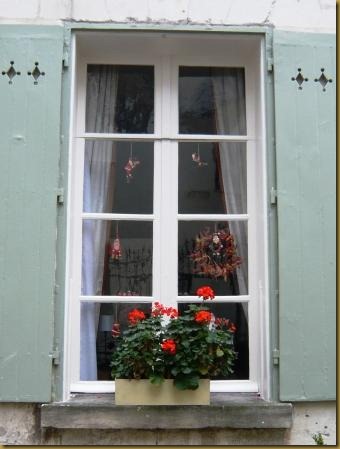 Christmas decorations and geraniums in flower in a Loches window.

Everywhere we went there was evidence of a mild autumn and winter (so far anyway).  We saw geraniums in flower everywhere, including our own.  We also spotted a red camellia and pink hollyhocks in full bloom.

Our own geraniums were still holding on pretty well.

But we had a nice time and on our last day, as we were packing up to come home, sadly, the sun came out and we had our lunch on the terrace before we set off back North. 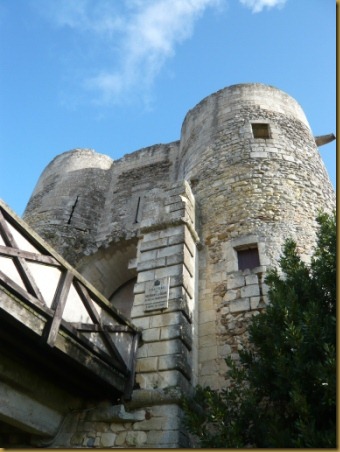 Blue skies and fluffy clouds on our last day.

However, due to the mild temperatures we didn’t make much of a dent in our log pile, which is still there for another visit, and the electricity bill will be better than usual.  Every cloud and all that…….