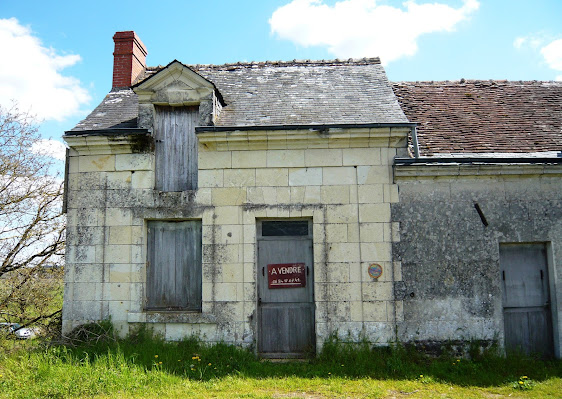 In need of a lick of paint, but could be cosy.

more of the same DIY, Houses

SOMETHING FOR THE WEEKEND 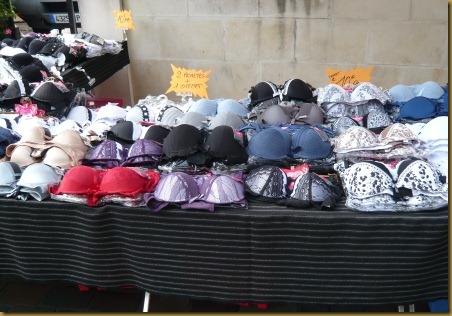 A stall on the Saturday market in Loches.

A WHOLE YEAR (how was it for you?) 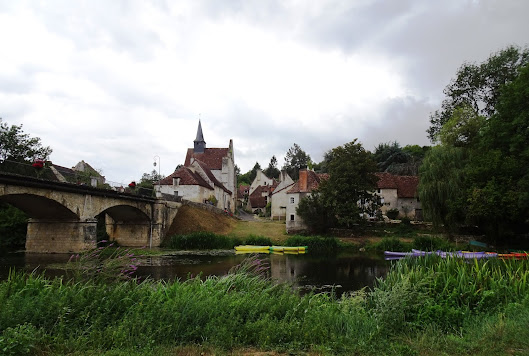 These are some of my photos taken on a trip to Angles-sur-L'Anglin in the middle of August last year.
Unbelievably, it is now exactly one year, come Monday, that we have been very much in the grip of the pandemic.  On the Monday 16th March last year we were advised not to go to the pub or to mix with anyone much, but the pubs, shops and schools stayed open.  Nobody took a lot of notice and people carried on more or less as before. No. 15, the salon de thé in Angles, is one of the few places where you can get tea and cake in the middle of the afternoon.

With horrifying images from Italy on our TVs every day, we had a sense of both disbelief and impending doom.  Boris Johnson visited a hospital where patients with the virus were being treated and shook hands with everyone he met.  This, presumably to prove that if he had nothing to fear from the disease then nobody else should be concerned either. 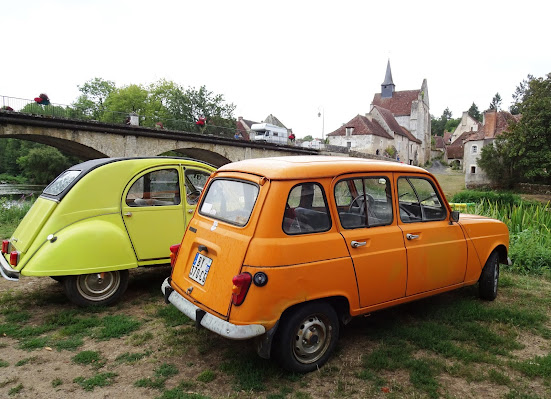 A pair of iconic old French cars.
Come Monday 23rd March in the evening, the true seriousness of the situation was spelled out to the nation and we immediately went into real lockdown.  It was a week too late. 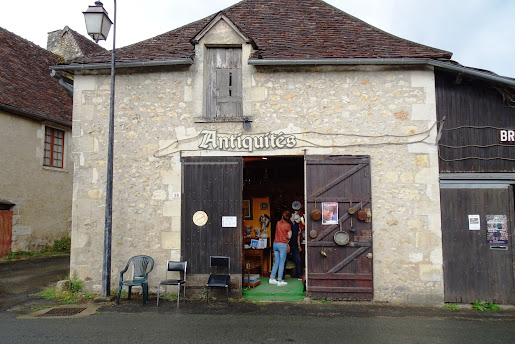 The brocante shops were all open for business.
Following the lead (i.e pinching the idea) of one of my favourite blogs, how was it for you?  After a whole year of ups and downs, hopes and fears, joy and disappointments, how have you fared? 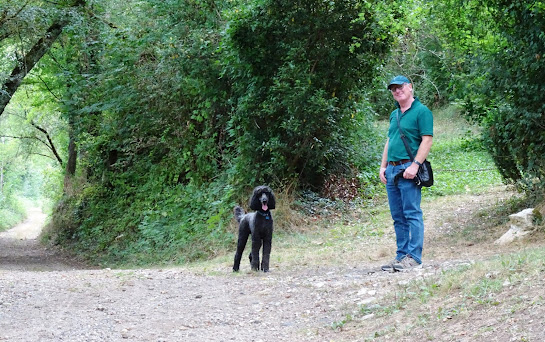 We enjoyed a walk along the river with Hugo.  Rain clouds were gathering.
We are, I think, much calmer and accepting than we were this time last year.  The first lockdown of last year came just as we would normally be packing up to go to France for the spring and summer.  We felt a huge sense of loss. 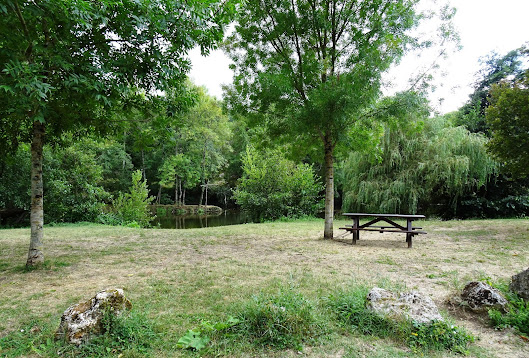 Although we have visited Angles many, many times, we had never done this walk by the river before.  We were probably too busy taking tea and cake!
We were like cats on hot bricks all spring on summer, feeling very cheated, anxious and as if it was all a bad dream.   Covid-19 was sweeping through the country at a terrifying rate and as we queued outside the supermarket with our trolley we were very unsettled. 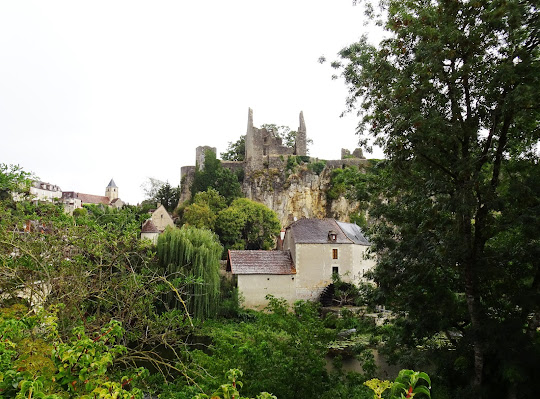 The château has the perfect spot overlooking the village and the river.
Who would have thought, when our prime minister told us it would all be over in twelve weeks, that we would, twelve months later, still be in lockdown and with several weeks to go - if it all goes to plan.  It could be longer. 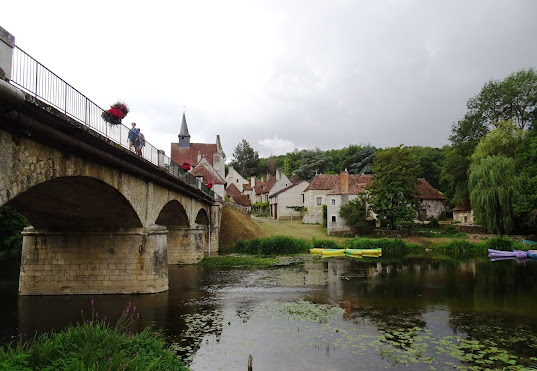 Angles is a very photogenic place.  There are great pictures to be taken at every corner.
This time last year you could not buy a toilet roll, bag of flour, packet of pasta, bar of soap or tin of tomatoes because the hoarders had got there before you.  This year we are in a better position.  For a while anyway, until the trading problems arising from Brexit kick in. 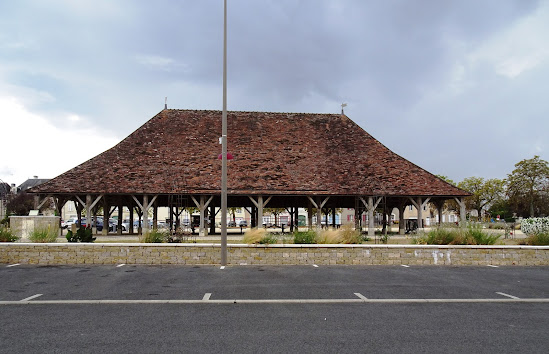 We passed this on our way home from Angles.  I can't remember where it was because we took the pretty route home and meandered around a bit.

We spent spring and early summer mostly in our garden.  The weather was unusually good.  Gradually the restrictions were lifted and in late July we made it to France, staying for eight whole weeks.  What precious weeks they were.  Normally we are there for 26 weeks of the year but as the situation worsened again in September we cut short our stay, packed up early and came home.  We have now been back in the UK for exactly six months.

Last year we got to France after being away for seven months but this year it looks like being nine, or even ten.  Even when all we had was the little house in the village where we just spent our holidays, until 2020 we had never been away from the place for more than five months.  (I dread that in 2021 it could actually be as much as a whole year.) 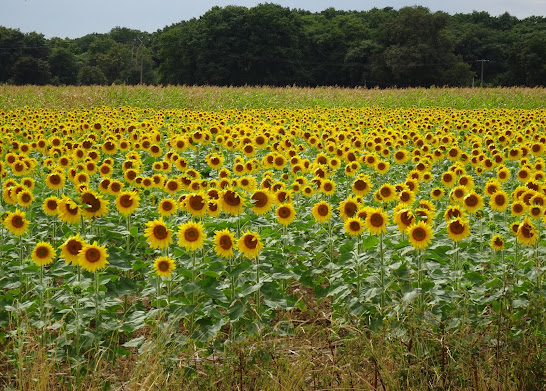 We also passed several late crops of sunflowers on the way home.
We spent much of last year trying to get my dad into his sheltered housing accommodation and, in the end, in desperation, we resorted to getting our local MP involved.  That did the trick.  I have a suspicion that this particular Conservative MP wanted to show that not all of his ilk were completely heartless when it comes to caring for our elderly citizens.  Thousands of care home residents had already lost their lives to the virus because infected patients were discharged from the hospitals to the care homes to free up hospital beds. 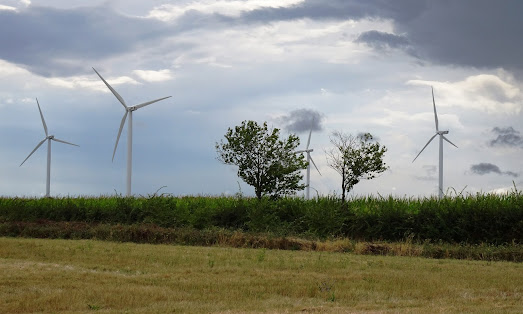 More of these seem to appear with every year.

So, one year and 127,000 UK deaths further on, we are still in lockdown.  Things are looking hopeful as the vaccination programme takes effect.  Numbers are still going in the right direction.  They go up and down a bit in different areas but on the whole there seems to be light at the end of the tunnel.  Well, on this side of the channel tunnel anyway.

I have begun to hear people say that they could live like this forever if need be.  I couldn't.  Well, I could if I had to but I wouldn't want to.  I would never be content living like this, but I accept that there is no point hankering after what we can't have and we now keep a note of interesting places we could go and visit in the UK that we have never been before.  This is a back up plan if we are allowed to travel freely here but the European borders remain closed.  That's something we thought we would only do once we had finally hung up our travelling shoes and returned properly to the UK.  Not yet, not now.

more of the same Photo gallery, The virus. 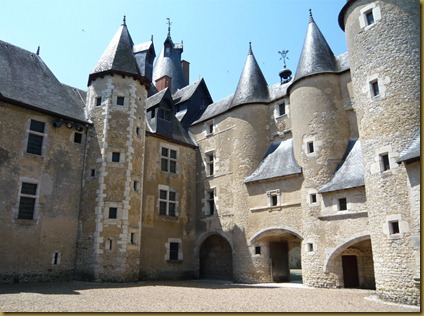 My dad is settled into his sheltered housing and doing well.  We have completed the sale of his bungalow and re-homed most of his unwanted belongings, one way or another.  There were inevitably a few trips to the tip but very little that was vaguely useful was thrown out.  The local hospice charity shop had first pick of the furniture and with my limited computer skills I successfully used social media as a way of re-homing stuff.  We sold furniture, record players, computer screens, drawing equipment and even the piano that way.  Much, much better than simply paying a huge amount of money to someone to take it all away, although it was, without doubt, a lot of work.  The trick is to make things very cheap to ensure a lot of interest and a quick sale.

Of course, that's not the end of the story.  As always, after selling a house there is a good deal of paperwork to do, cancelling accounts for utilities, insurance, and so on.  We have spent hours, days even, on the phone or in front of the computer trying to get various companies to answer our calls and emails.  What an uphill struggle that is.  These companies are so keen to assure us of giving their best possible service during these "difficult times" but the service is in fact often dire.  After a good deal of persistence most of it is now done.

We do however, have a problem with the council.  They send out a tsunami of printed material to his flat every week.  Most of it is statements regarding his rent and other services.  Occasionally there is actually an invoice that needs paying but poor old Dad, who now can't see well enough to read them properly, thinks everything is a bill.   He's of the generation that is desperately keen not to have any unpaid bills or debts against his name and would be sending cheques off in response to every letter if we didn't intervene.  So far this week he has phoned us four times straight after the visit from the postman to say another bill has arrived.  Out of the five letters this week only one was something that needed to be paid.

The council's bill for all this postage and labour must be huge!  There is an enormous amount of duplication of material.  I expect there are legal reasons why they have to keep tenants infinitely informed but there must be a better way.  We have requested that post be sent to us instead as we have LPoA , and that direct debits be set up for most of it, but so far those requests have fallen unnoticed into the depths of the slowly grinding local authority machine!  We are making very slow progress! 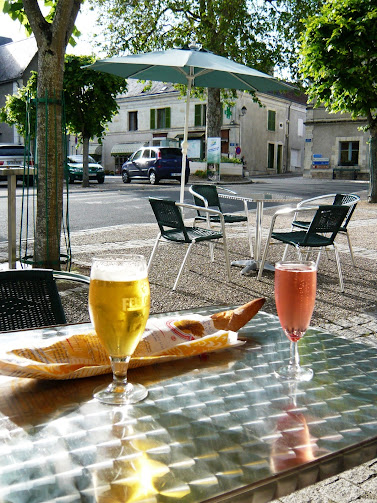 Teatime (apéro time) in Le Grand-Pressigny.
This teatime, here in the UK, we will be celebrating a friend's 70th birthday.  Via Zoom.  I have to say I am not a great fan of Zoom.  As a way to catch up with friends we're not allowed to meet with it's better than nothing but it's a poor substitute for the real thing - for clinking a glass with and hugging the birthday girl - and a real party.  When I think of Zoom in the future it will forever remind me of the disappointments of this last twelve months.
I have a meeting with a financial advisor booked for Monday which will also be via Zoom.  The question is, will Daisy insist on walking over the keyboard just as we get to the nitty gritty of what to do with the proceeds from the sale of my dad's house?  Part of me hopes that she does !!
The coronavirus "numbers" are definitely heading in the right direction but the roads yesterday, as we went to fetch our groceries, were incredibly busy.  I worry that too many people think that because so many of those that might otherwise end up in hospital have been vaccinated that they needn't stay home any more.  Although goodness only knows where they're going as everywhere is closed.
We are tentatively hoping to travel to France in the summer.  It's too early to make real plans, although we probably should book a crossing before there are none left.  And of course the dreaded Brexit adds a level of complication that we need to get our heads around - the pet health certificates for one thing, and deciding if it's worth even considering getting a visa just in case it becomes possible to stay beyond our Schengen allowance.  Forward planning is so much more complicated than it used to be.
As for the blog, after a bit of pruning, it will probably carry on pretty much as before, largely because I've discovered that changing it is just so much hard work!!
Bon weekend !!
4 comments:

more of the same Brexit, Events 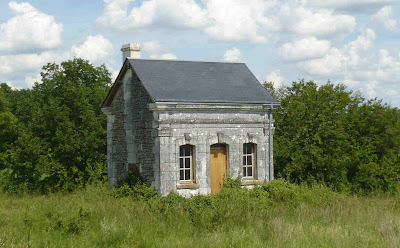 HOW TO REPAIR AN OLD DOOR IN FRANCE 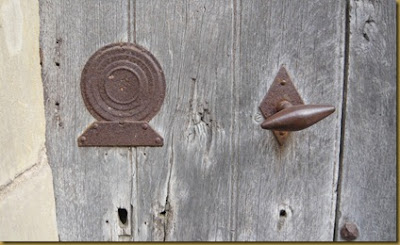 The lid from a tin of beans comes in very handy when you have an old door to repair. 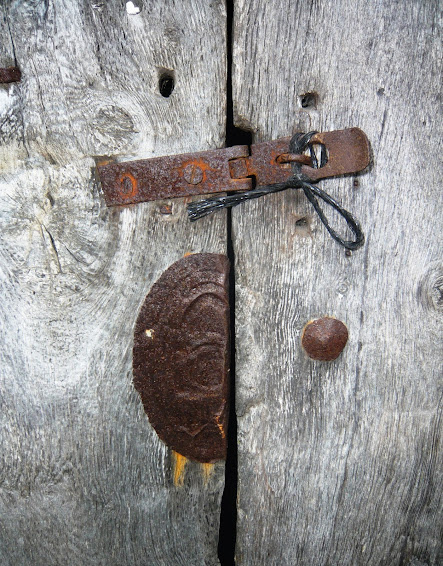 We think this one was sardines.  Or possibly herrings.
3 comments: