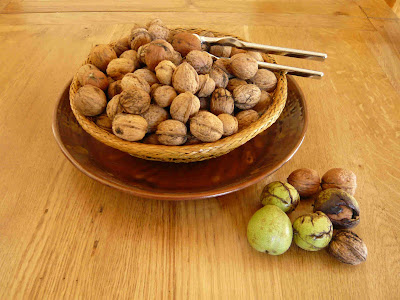 Fresh walnuts are so sweet.
Last year (2008) we spent a week towards the end of October in Le Grand-Pressigny and although it was chilly it was sunny and we had a great time. Early in the week we returned from a day out to find a basket of walnuts on our doorstep - a gift (one of many) from our neighbour, Mme André.
We had never had walnuts this fresh before. They were so sweet and soft compared with the shop-bought ones we had had before which were often bitter and hard. 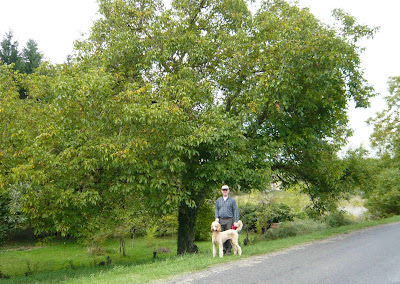 Nick and Lulu under one of the many walnut trees around the village.
This year we were in LGP a week earlier in the month and we were hoping we would not be too early for the walnuts. We were not disappointed. There were walnuts in abundance everywhere. We gathered some for ourselves and Mme André provided us with a little bagful most days. They were delicious, just like last year. 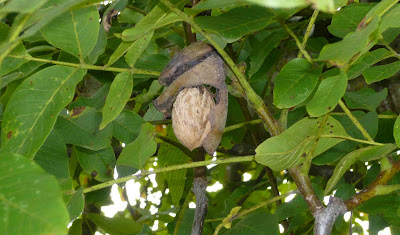 The walnut on the tree, about to fall, leaving the green bit behind.
The walnuts form in little fruits that look like small pears. Whilst on the tree the green outer shell splits to reveal the walnut as we know it inside. Usually the walnut then falls to the ground leaving the split casing on the tree. As we drove around the area in October this year, we would often see a car parked by the edge of a wood or field and nearby there would be a person with a basket or a bucket gathering fresh walnuts from the ground. 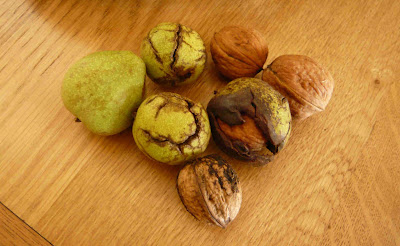 This picture shows the stages of the walnut from the green "fruit" stage to the final walnut, which then falls to the ground.

We brought a large quantity of walnuts home with us. Other than eating them as nuts for dessert or putting the odd few in a salad, we are short of ideas on how to use them. One can only eat so many coffee and walnut cakes !  Any suggestions ?