A DAY IN AMBOISE 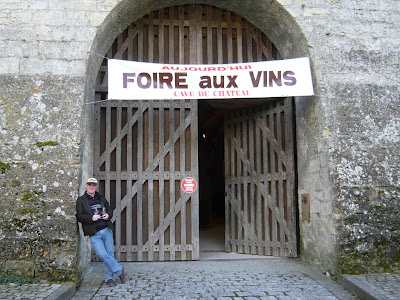 Some time ago, Jim Budd listed a few things that were going on in Touraine in April and one of them was the Foire aux Vins at Amboise. 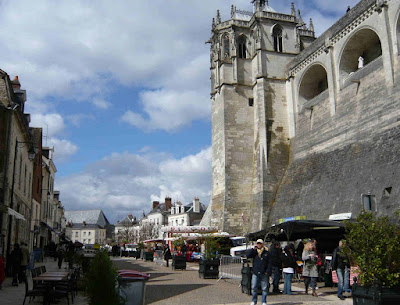 The journey from Le Grand-Pressigny takes about an hour and one of the great joys about travelling in our part of France is the lack of traffic. We did go on a Sunday morning but even so, we barely passed a score of other cars.

When we got to Amboise it was a different matter. There was also a street market in full swing and the place was heaving with tourists. We have little patience these days for queuing for parking places so did a quick tour of the car parks and then gave up and parked well away from the town centre in a residential area. A very nice area, too. Unfortunately as it was a good 15-minute walk back into town and that rather scuppered our wine-buying prospects. 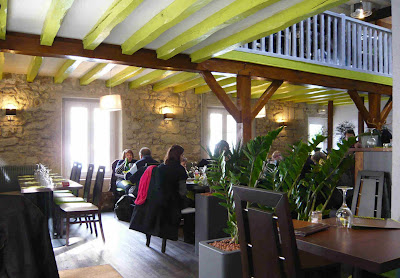 As we arrived just before midday and the place was very busy we thought it would be a good move to get lunch as soon as possible. We dived into the first restaurant we came across, which was called L'Amboiserie. Inside the decor was striking. The beams were painted in a sort of lime green colour and the napkins and other bits and pieces matched. We saw this colour everywhere and it is obviously "à la mode". .
Our classic lunch-buying tactics paid off. At 12 noon we got one of the two remaining unreserved tables and throughout our lunch we observed the waitresses turn away less fortunate people. This rejection was both given and accepted very graciously by all. I did wonder at the reasoning of families of 5, 6 or 7 people who would turn up with assorted hungry children hoping for a table.
We also observed that had the floor staff been a bit slicker they could have tripled their turnover that day. At least two thirds of the time spent in the restaurant was in waiting for service. We would have liked to have been served with menus, food and bill much quicker as we had other things to do and we also noticed other diners getting fidgety and irritated. With a couple of extra table-clearing staff the place could have served a lot more lunches without rushing people at all or compromising the relaxed dining experience for those who wanted it. .
We enjoyed our lunch very much. Nick had a huge salad, one of those with a couple of poached eggs on top, and I had a delicious omelette. Now that we were pleasantly stuffed, we headed off to do some degustation. 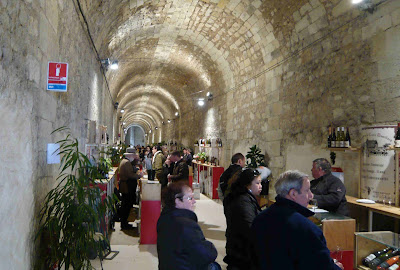 The wine fair was in the cellar of the château. This was a great setting for it. Chilly enough to keep the wine in good condition but airy and beautifully lit. The producers were all in the same kind of stand, along both sides of the cellar. It was busy but not too crowded. This was perfect for us. It meant that we could linger at a producer's stall if we wanted to discuss the wine and prices. Or just fade away politely if we weren't interested, there always being someone behind us waiting for a tasting. 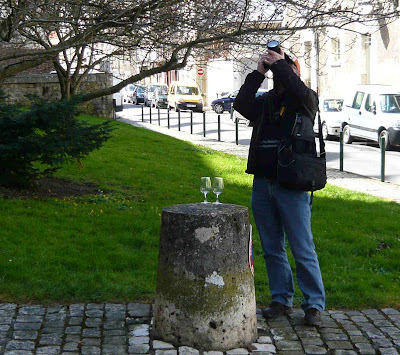 The routine was the same as we have encountered before at similar events. There was no entry fee but you buy a tasting glass. 5€ for two this time. They are usually engraved with the details of the event and you keep them afterwards. Then you wander freely from stall to stall tasting whatever you please.

Most of the producers were from a village called Limeray just a few kilometres east of Amboise. Nick did most of the tasting as I had volunteered to drive. The wines were varied and we liked a lot of them. We got chatting to one producer who was very friendly and whose wines we really liked. We said that as we had had to park a long way away we could not really buy any wine today as we couldn't carry it. Other visitors were leaving the fair with boxes or bags containing bottles of wine. Some had trolleys full of boxes taken out to their car which they had somehow manage to shoe-horn into a space outside one of the entrances.

The lady gave us directions and a card with a map on it. Then she did a sort of shifty look over each shoulder, reached under the counter and handed us a leaflet. A quick glance at the price list told us that the prices at the vineyard were about a third cheaper than at the fair. We promised to pay her a visit when we were next in France and we will, too.