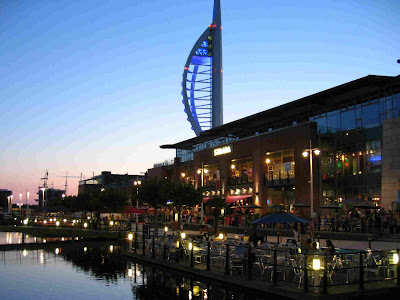 Setting off on our great adventure to find and buy a house in France, we enjoyed an evening in Portsmouth before boarding the overnight ferry. I was so excited, I didn't sleep a wink. Our gite at Le Grand Pressigny
We arrived in Le Grand Pressigny on Sunday 12th August 2007. The gite owner met us by the church and we followed him to the gite which was a short drive outside the village. The gite was absolutely gorgeous. It had been beautifully restored; we guessed it had been an ancient fermette. The attention to detail and the quality of the work was stunning. We had stayed in many gites, houses of all ages, but this was the best ever in terms of tastefully enhancing the character of the house.
It was actually a large house with a cottage attached which had been converted into the sitting room. Very clever. This room housed the old bread oven and it was made into a feature both inside and out. 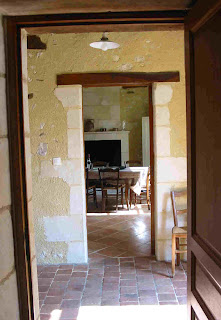 The hall with original tomettes
We settled in and looked forward to our first meeting with an estate agent on Monday morning. If we could find something like this, only smaller, it would be wonderful. 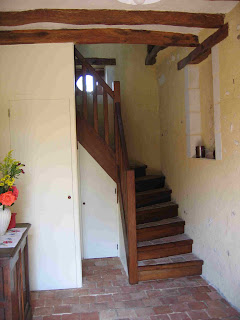 The staircase and lovely old beams "poutres de chene"
Monday dawned bright and sunny and we headed for Richelieu to meet the English agent. We were disappointed to find that the property we had seen on the internet and hoped to view had apparently been sold (by another agent) the previous week. Our agent didn't know this until he tried to book us in to see it. We thought this was a bit strange but he leafed through his folders and came up with three others we might like to see.
The first was truly horrible. A very grey, large, 19th century building, right on a busy road, with 4 bedrooms , no garden and a concrete yard.  Not for us, that one! 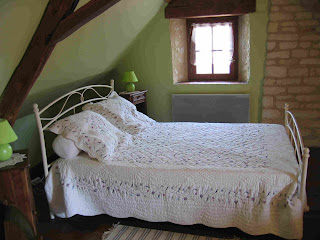 The master bedroom in our very comfortable gite
The second was more promising. A pretty, well restored cottage but with several disadvantages. It was in what was as described as a hamlet but was actually nestling with a couple of other houses on a farm, a good distance from the village of Rilly. It had a superb view over the valley and a small orchard with mirabelle and fig trees. But the kitchen was tiny, almost non-existent, the bathroom was grotty and the second bedroom was just a bed on the landing - something we would see over and over again. The French seem to go in for very casual sleeping arrangements, we concluded. There was scope for altering the inside of the house to suit our needs but as it was already at the very top of our price range, there would be no cash left for that. And the nearest boulangerie for our breakfast was definitely not in walking distance. Sadly not for us, this one either. 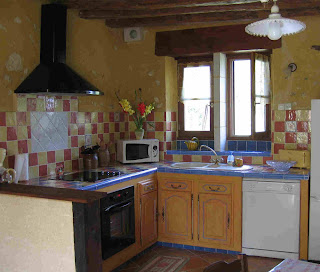 The very smart kitchen in our gite

The agent then took us to see an even more unlikely prospect. A huge partially restored house down a long and very dusty gravel track. The "garden" was virtually a whole field across the road and in the courtyard there was another building, just as big as the house, to "do up". We couldn't see inside the house as he had no keys and the neighbours, who turned up to see what we looked like, did not look very friendly.  Another one that was not for us. 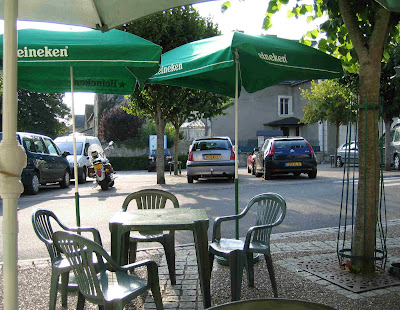 Debriefing at the PreHisto bar in Le G P

Having drawn a blank on day one, we headed back to Le Grand-Pressigny and enjoyed an apéro in the PreHisto bar followed by dinner in the hotel. With the benefit of the day's house-hunting experience we were able to formulate exactly what we were looking for in our holiday home. 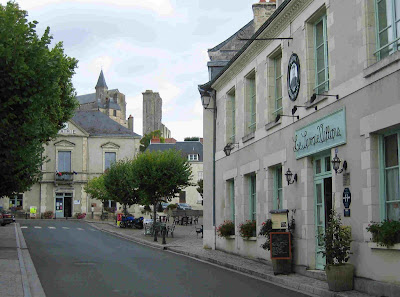 SPECIFICATION FOR OUR HOLIDAY HOME

1. A small house, not a renovation project, although we didn't object to a little DIY and decorating. It must be reasonably comfortable to live in whilst work was in progress, i.e. must have a toilet, kitchen and proper bedroom.

2. A proper kitchen, either separate or open-plan, but with enough room for proper appliances, not just a 2-ring hob perched on top of a microwave next to the sink. We both enjoy cooking and needed enough space to do it properly.

4. Two separate bedrooms. They did not need to be huge but a bed on the landing would not do.

5. A small, manageable garden, reasonably private for relaxing and entertaining. Not just a patch of yard in front of the house. Not acres of grass either. We didn't want to spend all of our holiday gardening or mowing the lawn.

6. Reasonably secure parking for the motorcycles.

7. Also if possible, some dog-walking terrain nearby.

8. Last but not least, it should be in a village, within walking distance of some shops and some entertainment, eg a bar, perhaps a restaurant. We had already arranged to see a house in Chinon the next day, Tuesday, so we were really looking forward to that. The pictures on the internet had looked very promising.